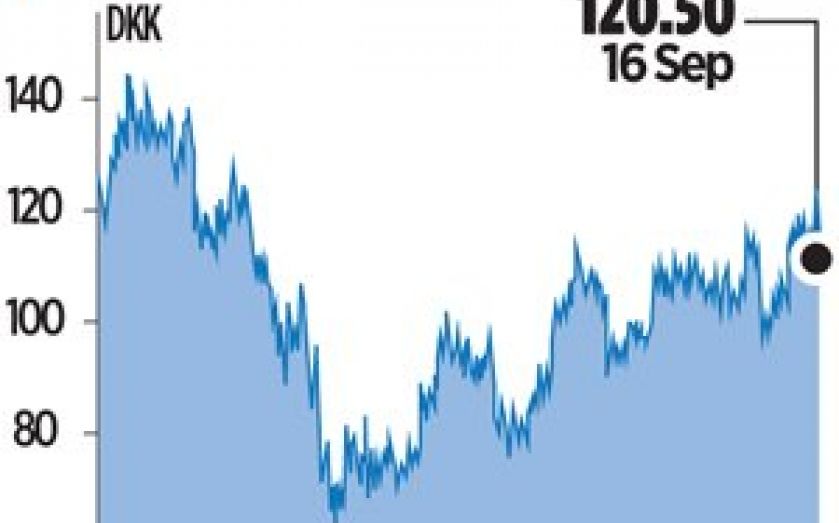 THE BOARD of Denmark’s biggest bank Danske Bank overthrew its chief executive yesterday in a boardroom coup, swapping him for someone with “stronger qualifications” in banking.

Former boss Eivind Kolding, who took the helm of the Danish bank just nineteen months ago, has been replaced by the company’s corporate banking guru Thomas Borgen, a member of the executive board.

The regime change, which was driven by the bank’s board of directors, caused shares in the company to close up 3.52 per cent as investors cheered the change, their highest level since May 2011.

“The board of directors has assessed that – notwithstanding Eivind Kolding’s professional and personal qualities – it is, in this phase, necessary to have a chief executive officer with stronger qualifications within banking,” chairman Ole Andersen said.
The move is a brutal end to Kolding’s tenure heading the bank, which followed a long career within the company as both deputy chairman and chairman.

The bank has suffered criticism under his stewardship after revenues flatlined and the company failed to pay a dividend for five years.

“Thomas Borgen is an experienced and customer-oriented banker, who knows how to run a modern bank,” Andersen added.

PROFILE: EIVIND KOLDING
When Eivind Kolding woke up yesterday morning it’s unlikely he knew that just 24 hours later he would be unemployed. The move to cut loose the chief executive, a lifelong shipping executive, was swift and brutal.

A short boardroom vote yesterday morning decided his fate. Kolding came to work to find his services no longer required. It brought to an end a longstanding relationship with Danske that started in 2001 when he was appointed as a member of the board of

directors. The appointment to Danske came as he was rising fast in the close knit world of Nordic finance, finding his feet as chief financial officer of shipping and oil and gas company Moller-Maersk Group.

In 2005 he was made vice-chairman of the board of directors at Danske and a year later became chief executive and shipping partner at Maersk, cementing a meteoric rise.

He left the shipping boss role in 2011 to take up the chairmanship of Danske full time. But in what now looks like an ill-fated attempt to take a similarly powerful role in banking Kolding took control of the company February 2012 as chief executive.

His stewardship of the group was unspectacular and at times awkward. The bank was heavily criticised for an advertising campaign drawing on imagery from the anti-capitalist Occupy movement. Kolding was forced to apologise to the leaders of the movement over the debacle. His next move is unknown but his shipping heritage could play a part.