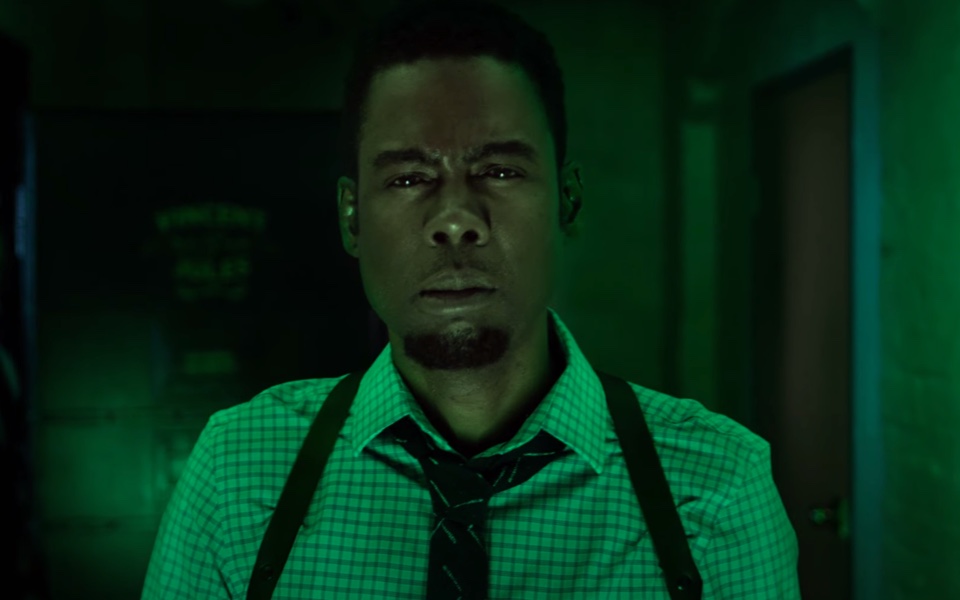 Eyebrows were raised a few years ago when comedian Chris Rock was linked to a revamp of the Saw franchise.

Rock stars as Det. Ezekiel Banks, an abrasive veteran cop who has lived in the shadow of his respected father (Samuel L Jackson) and resented for blowing the whistle on a crooked cop years ago. He is assigned a new partner, Det. William Schenk (Max Minghella), who looks up to “Zeke” despite his world-weary ways and reluctance to partner up. Shortly after being paired, the duo are assigned to the case of a cop killer who looks to be mimicking the deadly Jigsaw murders. As the investigation deepens, Banks uncovers the horrifying connection between himself and this new terror.

The film is directed by Darren Lynn Bousman, who was behind the camera for Saw II-Saw IV. Despite this familiarity, we do see a new direction forming. It’s more of a detective mystery, with influences from David Fincher’s Se7en and the many similar films that came after it. The pacing is uneven, and shouts plot points that should be whispered – the flashback scenes, where Rock and Jackson sport fake facial hair, feel particularly hokey. However, there is more to chew on here, and not just for the victims. The focus on police as targets speaks to very modern issues – one cop is targeted because he shot a man he pulled over. While current events aren’t explicitly mentioned, it’s clear that the phrase “dirty cop” has a wider meaning in the public mindset than it did when the series started in 2004.

The departure from the relentless gore of the latter sequels is a blessing or a curse depending on how you feel about the films. Spiral’s “games” are as grim and unpleasant as ever, but more spaced out and of service to the plot. If you found the average Saw movie hard to stomach, then this will be a medium ground that may prove more accessible, and certainly more coherent. Then again, why would a franchise try to appeal to non-fans? Those who adored the grizzle may find themselves slightly short-changed. You’re gaining depth, but losing something of the series’ dark soul.

As for the lead, there’s something refreshing about having a personality as big as Rock in every scene. We meet him giving a retrospective appraisal of Forrest Gump (“he beat China at Ping Pong – do you know how hard that shit is?”), and gives Banks a gallows humour that fits right in to this world. Is it the most nuanced performance ever? No, but Rock understands the assignment. There’s a sense of a person beneath the grizzled detective tropes. Any film can threaten to chop a person up, but if you know and care about the person who might be minced, there’s an extra dimension.

His notable co-stars also bring something to the table. At 35, Minghella may be stretching it as the wide-eyed rookie, but is a calm counter that doesn’t steal Rock’s spotlight. Equally, Jackson isn’t heavily used as Rock’s absentee father, but the two actors are gold when put in a room together (and yes, the word “motherfucker” is used liberally). It’s a tough task to follow Jigsaw, who by now is an icon of horror, but Spiral certainly chills the blood with a pig mask and slightly higher modulated voice.

The ninth film in the series attempts to evolve the formula, but may have thrown the baby out with the bathwater. Spiral is so determined not to be just another Saw film, that it may have accidentally become just another detective thriller.

Spiral: From The Book of Saw is in cinemas from 17th May.