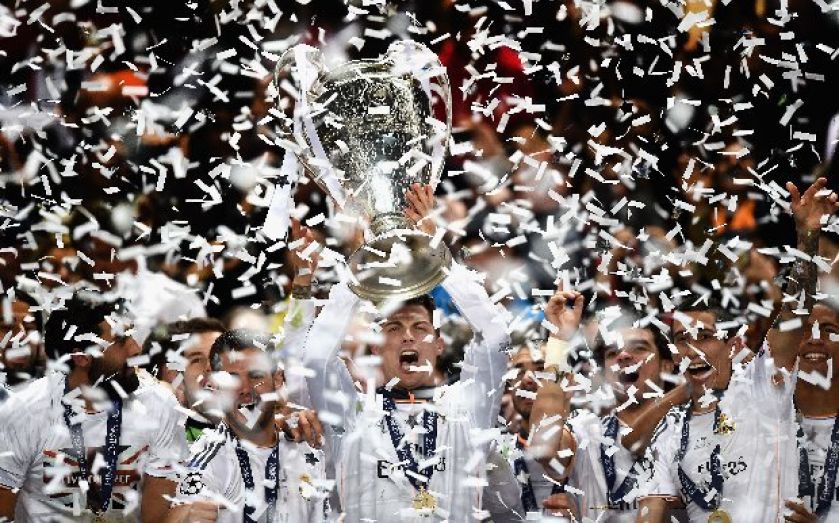 Real Madrid's tenth European championship crown saw them net £46m in prize money as the 32 Champions League clubs shared a total £726m this season, according to figures released by Uefa.

Spain, with £133m earned by its clubs, was the country with the largest share of the pool thanks largely to a memorable all-Madrid final. Runners-up Atletico de Madrid collected £40m from this year's competition despite their disappointment in Lisbon.

Despite only Chelsea making it beyond the last 16 this season, the Premier League came second with its four representatives raking in a total of £121m.

France had an impressive total with almost £70m, the majority of that going to PSG.

According to Uefa regulations, each Champions League club is entitled to a minimum payment by participating in the group stages of the competition. As a team progresses this increases, while performance related bonuses are paid for every win or draw. Money are also split across clubs from each country's market pool, divided mainly according to the proportional value of the national television market allocated to each team.

Qatar-owned big spenders PSG came below Real Madrid in second place with £43.7m, however Uefa are withholding £16m of that due to non-compliance with Financial Fair Play (FFP) regulations. The same is true for Manchester City.

Even doing terribly in the competition does not leave clubs empty-handed, with Belgian side Anderlecht taking home £9.8m despite collecting just a single point in their six group matches.

Over the last three seasons, Premier League club fortunes from Europe's premier competition have dropped from £150m to £121m this season. However the inflated figure for the season ending 2012 was due to Chelsea' Champions League success which netted Roman Abromovich £60m.

Despite exiting at the same stage of the competition last year, Arsene Wenger's Arsenal earned less as their share of the market pool decreased from £15.8m in 2013 to £11.1m this season.

The total dished out to clubs in the Europa League was more than four times less than that of the Champions League at a total of £168m, with competition winner Sevilla receiving £11.8m.