Saving money into a cash Isa over the last 18 years would have returned four times less than a stocks and shares Isa, according to research by Schroders.

Since 2009, the average savings account could even have lost you money. But while stocks and shares returns may have been higher, they have also been more volatile, with many sharp falls and rises. Cash, in contrast, has been a more stable home for Isa money.

What is an Isa?

‘Isa’ stands for Individual Savings Account. It is a tax-efficient account into which anyone over the age of 18 can save up to £20,000 a year and withdraw the proceeds, at any time, tax-free.

A saver can choose to keep any savings in cash and in return receive interest payments, just like a bank account. Or they can invest their money into financial markets to try to get better returns.

There are pros and cons to both. If you leave your money in cash then up to £85,000 is protected by the Financial Services Compensation Scheme (FSCS). Cash returns have historically been lower but they provide more assurance.

Investing your money into financial markets might offer the potential of higher returns but it also comes with the risk that you could lose all your money.

What has affected returns?

The combination of record low interest rates, introduced by central banks to tackle the financial crisis, and relatively high inflation would have eroded the value of your savings in a cash Isa. By contrast an investment in shares would have grown, despite two stock market crashes.

Schroders’ findings are based on analysis of average Isa savings rates collated by the Bank of England which go back to the launch of Isas in April 1999.

By comparison, £1,000 invested in the UK stock market in April 1999 could have been worth £1,841 by the end of the 2016/2017 tax year. Based on the FTSE All-share total return index, which includes dividend reinvestment, an investor could have achieved an annual growth rate of 3.66%, before charges are factored in.

The last 18 years have included two of the biggest stock market crashes in history: the bursting of the dotcom bubble at the turn of the millennium and the global financial crisis in 2008. 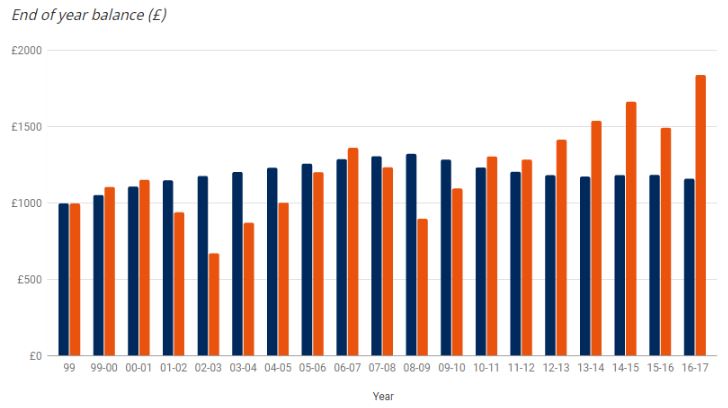 Past performance is not a guide to future performance and may not be repeated .The value of investments and the income from them may go down as well as up and investors may not get back the amounts originally invested. The stocks and shares Isa carries more risk and is subject to greater volatility than the cash Isa. If you are not sure as to the right investment for you, speak to a financial adviser.

Source: Schroders. Annual UK inflation data according to Thomson Reuters Datastream. Cash Isa returns calculated as the average yearly interest rate of UK monetary institutions for sterling cash Isa deposits from households. Stocks and shares Isa returns calculated using the FTSE All Share Index – total return. Calculations are net of inflation. The material is not intended to provide advice of any kind. Information herein is believed to be reliable but Schroders does not warrant its completeness or accuracy.

People have consistently put more into cash Isas despite the historic difference in returns.

When Isas were launched in 1999, the total cash Isa subscriptions were £12.3 billion compared to £16.1 billion for stocks and shares Isas, according to UK government statistics. So 43% of the money went into cash Isa savings accounts.

That was one of only two tax years, the other being 2000/2001, where investors have put more money into stocks and shares Isas. Demand for cash Isas over investment Isas has grown ever since.

The difference was most stark in 2008/2009, the height of the financial crisis, when £30.4 billion went into cash and £9.7 billion into investments.

The gap between the two has remained significant since then.

By the end of the 2016/2017, 75% of the money went into cash Isas despite a global economic recovery helping stock markets to make decent gains. 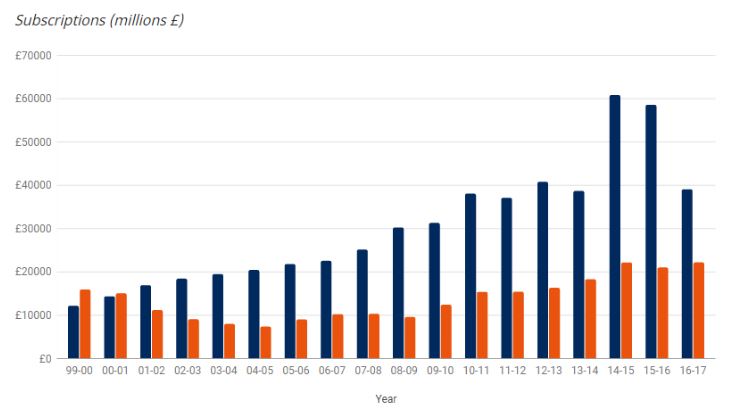 James Rainbow, co-head of UK intermediary business at Schroders, said: “The data suggests investors are still nervous about investing following two market collapses in the first decade of the century.

“It is hard to blame them. It has been a tumultuous start to the new millennium. Keeping your investment in cash at least prevents the investor from having to endure the emotional roller-coaster ride that comes with stock market fluctuations.

“However, it is a state of mind. Cash is effectively a false safety net in times of ultra-low rates because of the corrosive effect of inflation on purchasing power. Providing investors take a long-term approach, usually more than five years, the stock market has historically provided a better rate of return.

“Our data, while it offers no guide to the future, shows this has happened recently, but there is also longer-term data to support the notion. The Barclays Equity-Gilt Study found that UK shares returned an average 5.1% a year since 1899, with inflation factored in; cash returned 0.8% a year.

“Of course diversifying your investments is important. Having a mix of assets, including some in savings, is a wise approach.”

Important Information: The views and opinions contained herein are those of David Brett, Investment Writer, and may not necessarily represent views expressed or reflected in other Schroders communications, strategies or funds. The sectors and securities shown above are for illustrative purposes only and are not to be considered a recommendation to buy or sell. This communication is marketing material.