Visiting a destination for the first time is like being on a first date. You want to go to a nice restaurant, you’d like him to be charming, but arriving with six dozen roses and a list of potential baby names is probably overkill.

Dubai is like the most try-hard of bunny boiler boyfriends, the only place on the planet with a government-led ‘Ministry of Happiness’. It devotes itself completely to impressing you, whether you want it or not. Sure, it has the tallest building in the world, but it’s erecting a taller one, just to be on the safe side. Yes, it’s a city in the middle of the desert, but don’t fret – there’s an aquarium and a penguin sanctuary, too. Peckish? There’s Deliveroo and Nandos (well done, ex-pats). Diabetic? The local suq offers a dubious cure, ‘Water of Diabetes’ (your guess is as good as mine…).

On arrival at the achingly glamorous St Regis hotel, my own personal butler, Durbek, gave me flowers, personalised cupcakes and dates (the Dubai equivalent of Milk Tray), and promised to be at my beck and call 24 hours a day. He’d even do the ironing. And there was no need to walk anywhere – a sexy red Bentley was waiting outside to whisk me to lunch. Call me a commitment-phobe, Dubai, but we’d only just met…

Of course within the hour I was lapping up the luxury, booking a massage and wondering why Durbek hadn’t returned with those twelve Mulberry handbags I asked him to pick up from the shops (Dubai is home to the world’s largest shopping mall by the way, just in case you were worried).

But I wanted to see some sand, so I waved goodbye to the Bentley, jumped in a four by four and headed to the desert. On the way I spotted a few camels walking along the side of the road, and managed to chat to my local tour guide, Atif, about these fascinating creatures for just over half an hour (beating my previous camel conversation record of 28 minutes and 12 seconds). 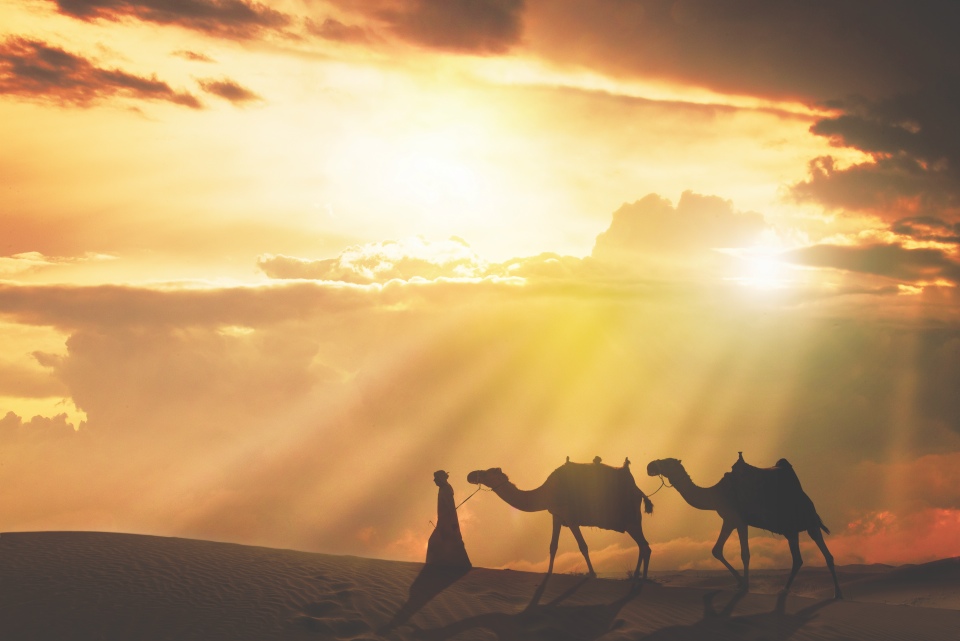 Camel racing is a big deal in Dubai, as is camel polo. Atif seemed to think I was mad when I asked him if there were any Grand National-style fences (‘No… ’ *awkward laughter, long pause*), but they do run fast, they’re ridden by professional jockeys and looked after by trainers, the whole shebang. Camel milk gelato is also a thing – although I suspect that’s for the tourists.

Unsurprisingly, with a booze provision generous enough to lubricate an eight course meal, Friday brunches can get a bit rowdy.

Later, when I attempted to ride a camel while screaming, “I’m not insured for this!”, I did wonder how anyone was brave enough to encourage these magnificent animals to gallop.

The greatest adrenaline rush came when we reached the sand dunes. Atif had deflated our tyres in readiness for this moment and grinned in a slightly sinister fashion as he revved the engine and checked my seatbelt was fastened. 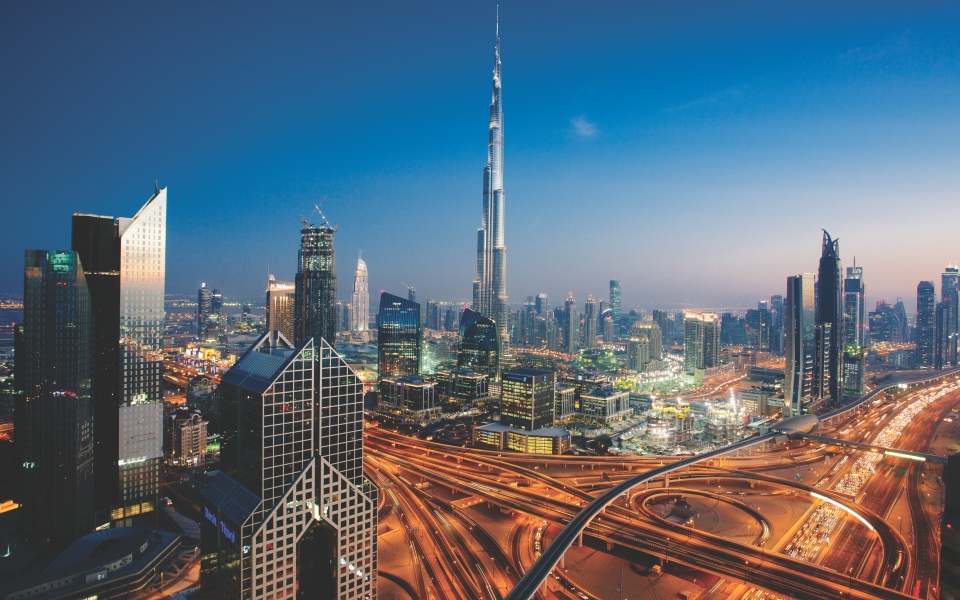 What followed was like a cross between smashing up your mates on the dodgems and having palpitations on a rollercoaster. Our car sped up the steep dunes at a rate of knots, paused and then whooshed down the other side at all kinds of unpredictable angles, turning the desert into a boy racer’s paradise. Atif was Lewis Hamilton and, despite the creeping nausea, I was loving it. We even skimmed the final dune in time to watch the sun set.

By the morning my stomach had settled enough to partake of another Dubai institution: Friday brunch. In this part of the world, the weekend runs from Friday to Saturday and hotels compete to offer the most sumptuous bottomless brunches you could possibly imagine.

At this point I should mention I consider myself fairly well versed in London’s superlative brunch offerings, from toasters at the table in Clapham to eggs accompanied by a string quartet playing Britney in Shoreditch. 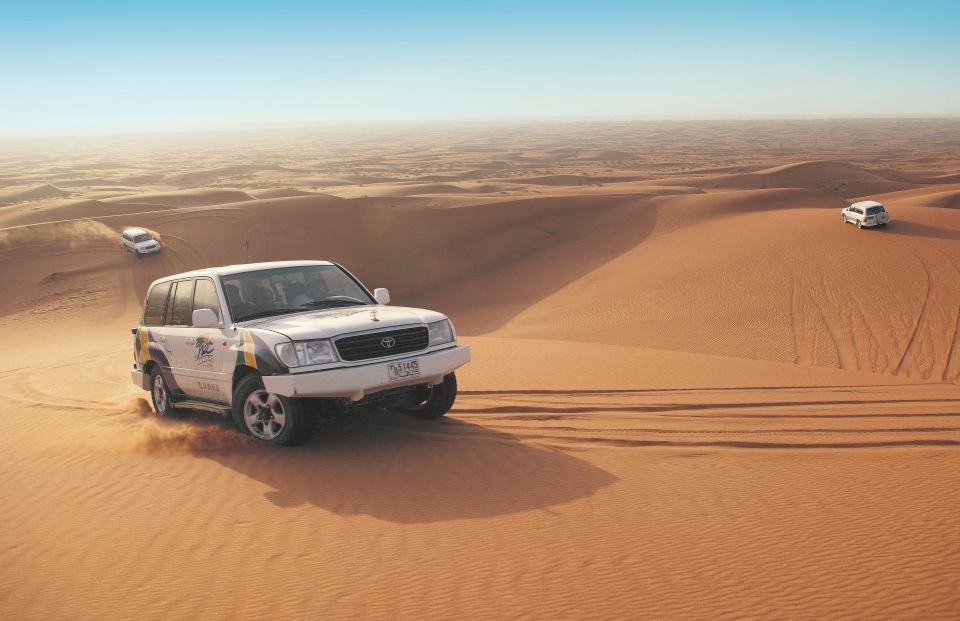 But Dubai’s Friday brunch was unlike anything I’ve experienced. The theme at the St Regis is ‘Versailles’ and sure enough Marie Antoinette was waiting by the opulent chandeliers to greet me, while Napolean served glasses of Kir Royale and led me to my table, slap bang in the middle of a Parisian fantasy land.

But I didn’t want to sit down yet. I was too distracted by the cheese table (with more varieties than the whole of France), the chocolate fountain (with three types of chocolate running into a gooey vat) and a glorious shrine to seafood comprising no fewer than ten lobsters.

Unsurprisingly, with a booze provision generous enough to lubricate an eight course meal, Friday brunches can get a bit rowdy. One thing to bear in mind, which I learned the hard way – the golden macarons aren’t edible.

Dubai has a desire to be bigger, better, more ridiculous than everyone else. But you can’t help feeling its heart is in the right place. And when you’re enjoying magnums of Bollinger and mountains of patisserie, agreeing to a second date doesn’t seem like a bad idea.