The British public is surprisingly ideological when it comes to who runs public services, it turns out.

The British may have developed a reputation for pragmatism over political doctrine as compared with continental Europe, but new polling from YouGov suggests the opposite is, in fact, the case.

The argument of public versus private provision of services has long been framed in terms of "whatever works best". Shadow health secretary Andy Burnham landed himself in some hot water with the press a few weeks back after seemingly ruling out further private provision in the NHS, even if it led to better results.

Private Finance Initiatives (PFIs) and contracting out have been a common feature across public services for some time, and Margaret Thatcher's privatisation programme has left a legacy of transferring services away from the state and towards private enterprise.

If it was solely up to the public, however, much of this would come to an end. According to YouGov's research, in six out of eight public service areas, the position that attracted the least support was "whichever maintains standards".

Mark Littlewood, Director General at the Institute of Economic Affairs, commented on the results:

The reluctance of politicians to take a step back from areas such as healthcare, rail travel, energy and more has resulted in the public continually getting a bad deal. It’s no wonder that the public favour services being publically provided.

Enabling markets to function freely, unhindered by government intervention, would improve the public’s perception of the private sector. 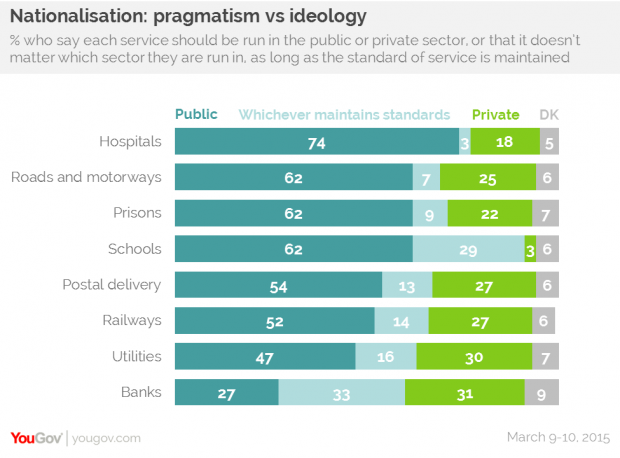 The majority of people want the public sector to control every service with the exception of banks and utilities. Strangely enough, considering their need for state support in 2008 and waves of bad press support for bank nationalisation was the lowest of any service with just 27 per cent favouring the policy.

YouGov's poll question was rooted in fantasy: it's easy to choose ideology over pragmatism when you're guaranteed a high standard of service in either case.
But the public and private sector do not offer the same standards of service.

Railways, utilities, and many of the other services polled by YouGov have proven to be more expensive and less efficient when run by the state. As long as policy is determined by ideological biases towards providers, consumers will continue to get the short end of the stick.

There is a significant split in levels of pragmatism when the public is divided along party lines. In every single category, Conservative voters are more likely than Labour voters to say they don't mind who runs the service as long as standards are maintained.