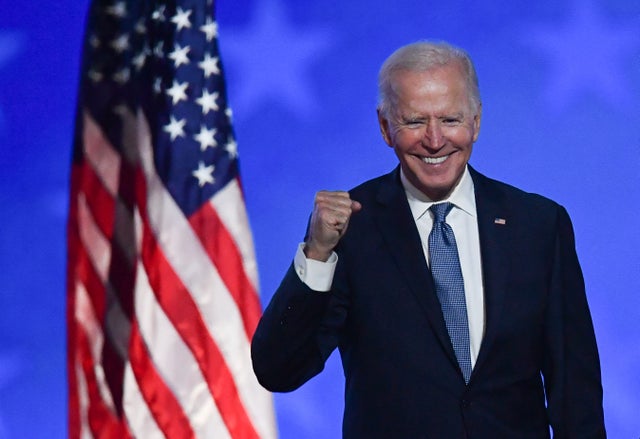 Joe Biden has become the 46th President of the United States after winning the key battleground of Pennsylvania, handing him the 270 electoral votes needed to enter the White House.

In a drastic flip from red to blue, the Democrat inched past incumbent President Donald Trump in the ‘Keystone’ state, awarding Biden 20 electoral votes and boosting his electoral vote count from 253 to 273.

Read more: US Election live: Biden inches away from White House as he takes the lead in Pennsylvania

“In the face of unprecedented obstacles, a record number of Americans voted. Proving once again, that democracy beats deep in the heart of America.”

Biden added: “With the campaign over, it’s time to put the anger and the harsh rhetoric behind us and come together as a nation. It’s time for America to unite. And to heal.

“We are the United States of America. And there’s nothing we can’t do, if we do it together.”

Biden steadily erased Trump’s early lead in Pennsylvania yesterday morning, after more than 31,000 mail-in votes counted in Philadelphia came out overwhelming in favour of the Democrat.

An extra 2,016 votes from Bucks Country meant he cruised past the Republican by 28,887 votes in the state, shutting the door for any path to reelection for Trump.

Trump must now leave the Oval Office after four years at the helm. In a last-ditch bid to block Biden’s route to victory, the President’s legal team yesterday challenged the Pennsylvania count in court, after Trump on Thursday baselessly claimed wide-scale electoral “fraud”.

The Biden campaign has said it is “capable of escorting trespassers out of the White House” if Trump refuses to leave.

Presidential candidates have only beaten incumbent Presidents four times in US electoral history.

Biden is also the most-voted-for presidential candidate of all time, after winning more than 73m votes.

Speaking briefly to reporters in Wilmington, Delaware, the president-elect urged the American public to show a “little patience” as the vote counting in battleground states stretched into its fourth day.

The Democrat’s path to presidency received critical reinforcement yesterday morning as Biden also edged past Trump in Georgia, flipping the state from red to blue.

His 7,258-vote lead against Trump in the state paved the way for several clear routes to victory. Biden currently leads in Georgia, Nevada and Arizona, though total vote counts may take several days.

Georgia’s secretary of state Brad Raffensperger yesterday afternoon confirmed there will be a recount in the state, with the razor-thin result too close to call definitive.

In Arizona, the continuing vote count slimmed down Biden’s early lead in the state to roughly 47,000 votes, but still firmly placed him in in pole position to take the state.

Several outlets prematurely called the state for the former VP on Thursday, prompting furious backlash from an increasingly desperate Trump.

Fox News has instructed anchors not to call Biden the “president-elect” if he passes the 270 mark, in a move that has sparked outrage from politicians across the US.

Memos leaked to CNN showed instructions for Fox anchors to “stay away” from using the description, and to instead say Biden has “enough electoral votes to win the presidency.”