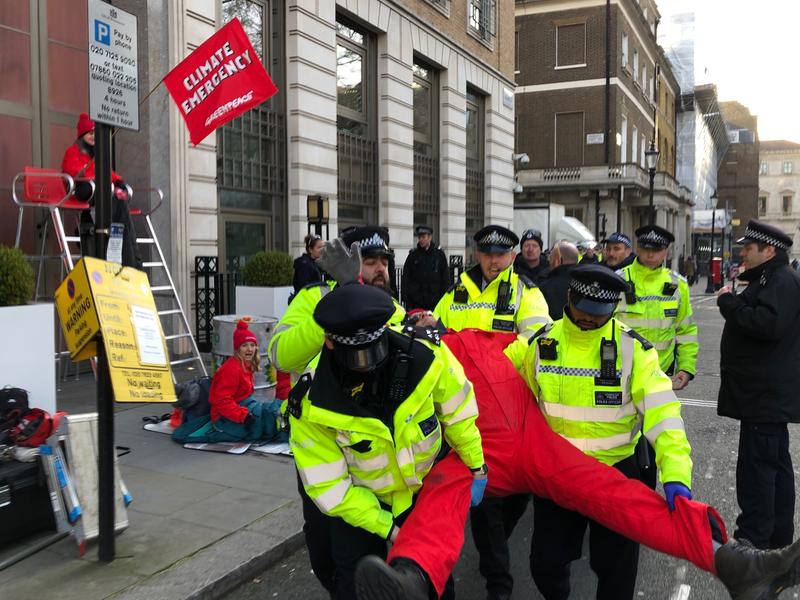 Bernard Looney’s first day as BP boss got off to a challenging start this morning as the firm was forced to shut its headquarters after Greenpeace activists blocked the doors to the oil giant’s London office in St James’ Square.

A hundred Greenpeace activists delivered 500 solar panels with a total area of over 800 square metres to the offices at 3am, but police prevented them from installing the panels.

However, all six entrances have been blocked by protesters chained to dirty oil barrels, with around 50 activists obstructing the road outside.

According to Greenpeace’s spokesman Stefano Gelmini, police have arrested 12 activists.

Protestors are demanding that BP ends its commitments to fossil fuel developments and instead switches to 100 per cent renewable energy.

According to the climate action group, BP is intending to spend $71bn on new oil and gas fields this decade, or roughly £32 for every £1 spent on renewables.

Richard George, one of the activists at BP’s headquarters today, said: “This morning police managed to block our solar installation, but BP are trying to block the transition to clean energy on a global scale.

“Their lobbyists have the ear of governments around the world, they spend millions blocking action to fix the climate emergency and billions on drilling for more oil and gas to make it worse.

“We’re not going to settle for a green-themed rebrand, solar panels on their petrol stations or wind turbines on their oil rigs.

“BP need to stop wasting billions drilling for more oil and gas that we simply can’t burn, and produce a plan to get out of the oil business entirely.”

New chief Looney takes over BP at a time of considerable uncertainty for the oil industry, with growing pressure from investors and activists alike to do more on climate change.

The Irishman, who was previously head of BP’s Upstream oil exploration business, is due to give a press conference next week to lay out his plans for the company.

In a statement, BP said: “BP’s new CEO Bernard Looney is visiting employees in Germany today, but he understands the frustration and anger of protestors in London.

“He shares their deep concern about climate change and will set out his low carbon ambition for the company next week. He hopes that what he has to say then will give people a sense that we get it and are very serious about working to address the problem.”

It is the second time in the last year that Greenpeace has targeted BP’s office building in St James’ Square.

All images credited to Greenpeace