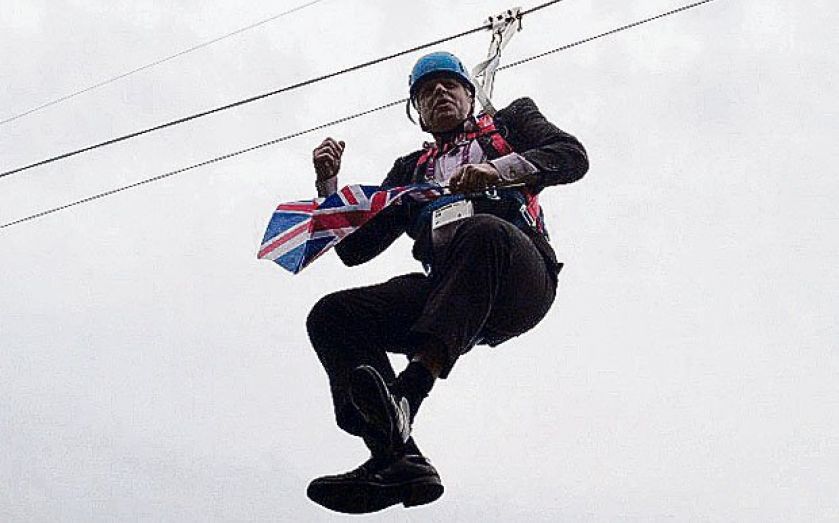 London Mayor Boris Johnson has finally confirmed that he will stand for parliament at the general election next May. Johnson has pledged to see out his second term as Mayor, meaning he could take on both roles at the same time, something he had previously ruled out.
A senior Conservative source last night confirmed the Mayor would not have to go through the standard selection process to become an MP and was likely to take the suburban safe seat of Uxbridge as his constituency.
“Boris is box office and he’s been an MP before,” the source added. “He’s an asset to any local constituency, but especially in London.”
Johnson, who had previously denied rumours that he would seek a return to Westminster, used his speech at Bloomberg yesterday to confirm the long-expected news.
“It is clear I can’t endlessly go on dodging these questions. So, let me put it this way… I haven’t got any particular seat lined up, but I do think, since you can’t do these things furtively, I might as well be absolutely clear, in all probability I will try to find somewhere to stand in 2015,” he said.
His intention to stand as an MP was welcomed by Prime Minister David Cameron, who tweeted: “Great news that Boris plans to stand at next year’s general election – I’ve always said I want my star players on the pitch.”
But if, as is widely expected, the Mayor seeks to stand in Uxbridge where Conservative MP John Randall is stepping down, he may face some tricky conversations with his local party over HS2.
In April, Johnson told Total Politics magazine that people who objected to HS2 did so over  property prices. “People are in the humiliating position of having to pretend that there’s some environmental objection that they have, that the great crested grebe is going to be invaded or whatever. What they care about is their house prices,” he said, adding: “It’s bollocks.”
Yet there is a strong Conservative campaign in the Uxbridge constituency against the high-speed rail link, which will run through the area acc­ording to current plans.
Perhaps in preparation for his likely stint as MP for the area, Johnson recently visited, telling residents: “I am by far the best candidate to push for the changes to HS2.”
The Mayor’s pledge to fulfil his second term in office while seeking a seat in the Houses of Parliament has already provoked mixed reactions. Colin Stanbridge, boss of the London Chamber of Commerce and Industry cal­led John­son’s decision “disappointing”, adding: “London business needs and deserves a mayor giving their undivided attention to the problems facing the capital.”
The Mayor’s parliamentary ambitions will be good for the City, his team says. A spokesman for Johnson said: “He will continue to stand up for our vital financial services against EU interference and fight for the investment in infrastructure that will drive economic growth and make London the destination of choice for the very best global talent.” And Johnson’s ex adviser Kulveer Ranger added: “He’s closer to the City as Mayor than most politicians in parliament. He’s made his commitment clear and will continue to do so.”

JOHNSON ON THE RECORD

Boris on high-speed rail critics:
“They’re not campaigning for forests, they’re not campaigning for butterflies. They pretend to be, obviously, but what they’re really furious about is that their house prices are getting it.” (April 2014)
Asked if he would stand as an MP:
“No, because I have got a huge amount of work to do and I can’t see how I could. I have got to go on and deliver a colossal amount of stuff in London.” (December 2013)
On the City and Europe:
“I want to stay in a reformed EU, that serves the consumer, a Europe of citizens and not of bureaucrats and politicians. But if we can’t then we have nothing to be afraid of in going for an alternative future; a Britain open not just to the rest of Europe but to the world.” (Yesterday)
“I don’t think we want to go through an endless orgy of stable door banging and excessive regulation on the financial services sector, which is actually one of the few sectors which is showing signs of growth and putting on jobs.” (July 2012)