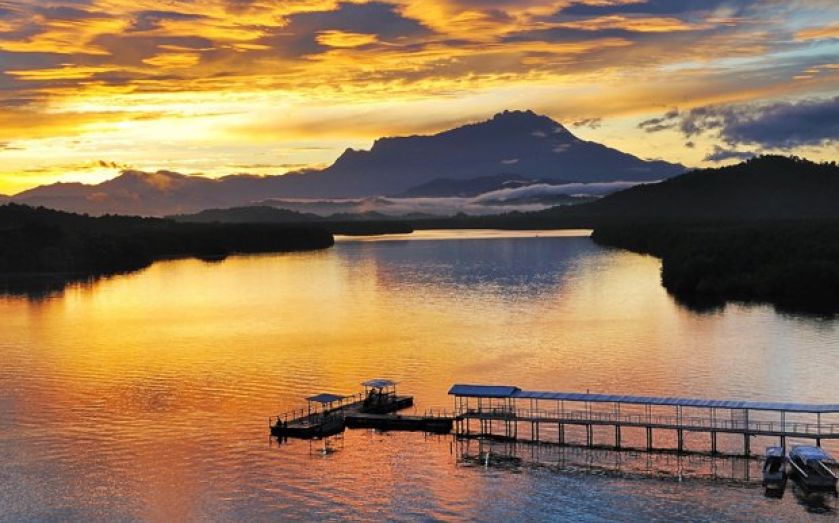 BORNEO isn’t the sort of place people just go. The world’s third largest island, shared by Indonesia, Malaysia and Brunei, is a Serious Destination; usually found on those top five lists that honeymooners browse, vying with African safaris or the Maldives for the ultimate trip-of-a-lifetime status.

It merits a smug Facebook status as you check in at Heathrow; a selfie or 12 of your feet parked on various exotic sunloungers; and a free pass to start all stories with “When I was in Borneo…” for at least six months after you get back.

The island’s exotic status comes partly from the fact that it’s not particularly easy to get to. While all those air miles you’ve been saving up for a special occasion might just cover a business class upgrade to Singapore or Kuala Lumpur (two of the major Asian hubs that serve the island), you’ll still have to spend another three hours in the air before reaching Kota Kinabalu, a popular beachside gateway on the north-west coast of the island.

But once you get there, the options for how to spend your time are overwhelming.

The Malaysian part of the island alone is home to almost 30 national parks, offering the chance to head offshore to dive by nearby Gaya Island, venture inland to trek through the jungle and up to Mount Kinabalu – a 4,000m peak in the middle of one of the parks – or just stick to the beaches for hot, languid sunbathing and sunsets.

For those stretched for time, or less willing to drag themselves away from the honeymoon suite, the “lite” version of most of these activities can be done close to Kota Kinabalu itself, with many of the remote hotel resorts offering easy access versions of the island’s biggest draws.

WHIRLWIND TOURING
A morning spent watching the sunrise over Mount Kinabalu is particularly spectacular, with the misty view across Borneo’s dense forests and winding rivers making the 6am wake-up call and half-hour uphill trek more than worth it. A night-time river cruise to see trees along the bank lit up by fireflies is equally stunning, with only the moon and hundreds of the tiny, bioluminescent insects to illuminate the pitch black river.

The coastline’s mainly flat landscape also makes it perfect for cycling; if you can stand the heat then a short tour around the local area is a great way to see how the locals live, including a glimpse of tradition in the indigenous Bajau (sea gypsy) peoples’ stilt houses, wobbling perilously over the clear South China Sea.

But, as pleasant a distraction as they provide, no one really comes to Borneo for fireflies and history lessons. What makes the 15-hour flight worth it is the one thing that really earns Borneo its status as a nature lover’s paradise and bucket-list destination – the orang-utans.

Native only to Borneo and neighbouring island Sumatra, the WWF estimates that fewer than 65,000 of these lumbering orange apes still live in the wild, with numbers declining rapidly as their natural rainforest habitat shrinks to make way for logging trucks and agricultural development.

With more than 80 per cent of the surviving orang-utans found on Borneo, it’s the best place in the world to see them in the (semi-)wild, making the island a major destination for so-called eco-tourism, with sanctuaries and rehabilitation centres popping up across the remaining jungle.

For this, it’s definitely worth leaving behind resort life and venturing further inland to get the best experience – though there are alternatives for those who harbour no desire to go jungle trekking in search of the elusive canopy dwellers.

In keeping with its location on a 400-acre forested nature reserve, my hotel (the secluded waterfront Shangri-La Rasa Ria) is home to an orang-utan sanctuary, which offers educational talks and twice-daily trips into the forest to see its residents.

Though watching the young apes swing in on cue via treetop ropes to feast on fruit and groom each others’ fire-coloured coats is an impressive spectacle, the popularity of the activity means you’ll be peering over numerous heads and camera lenses to catch a glimpse, and is likely to leave most travellers wanting more.

Luckily the eastern side of Sabah offers plenty of options, with most – including the popular Sepilok and Kinabatangan sanctuaries – close to second city Sandakan, which is accessible by air or bus from Kota Kinabalu. Hardier types can even hire guides to lead them further into the island’s rainforest, which is also home to the ridiculous-nosed proboscis monkey and the impossibly cute Borneo pygmy elephant.

Though (thankfully) not yet a mainstay of the Southeast Asia gap year trail, Borneo is the sort of place that you could quite easily explore for months, armed with little more than a guide book and decent pair of boots.

The choices can make a shorter trip seem daunting, and it’s certainly worth some careful research and planning to make the most of everything on offer – regardless of whether you choose to cram in as much as possible or focus on edited highlights.

But don’t let that put you off. Get it right, and you’ll be boasting about your trip of a lifetime long after the honeymoon (or even the marriage) is over.