"Can I be an astronaut if I’m a girl?” That was the question asked by Katy Alexander’s four-year-old daughter, Zabel.

To the New Jersey-born mother, this question came as a surprise. “Until then, I’d never really noticed that the characters in the space books she had been reading and the games she had been playing were all white men,” she tells me.

“Without being able to relate to the characters, she didn’t have the confidence to imagine herself doing those things.”

Unimpressed by what was available in the shops, and keen to prove to her space-obsessed daughter that there are plenty of female role models to be inspired by, Alexander quite literally went back to the drawing board. She began designing games and colouring books, drawing characters based on real-life scientists.

She has turned this quest for representation into a business, with the aim of making it fun for both boys and girls to learn about female scientists, some of whom – particularly outside of the western world – have been almost entirely omitted from history.

Calling her band of characters the “Remarkalbz”, Alexander has made sure that women, men, and people of various races and physical abilities are included in the mix, giving each one their own superpower, linked to their individual discoveries – a sort of amalgamation of sci-fi and history.

The Top Trumps-style game (called Top Quarkz) is sold for £9.95 on Amazon and stocked in various shops around London, while Alexander has started using the characters as the basis for educational workshops.

Her business is a small step for womankind, but children’s play is a good place to start when it comes to shifting stereotypes. 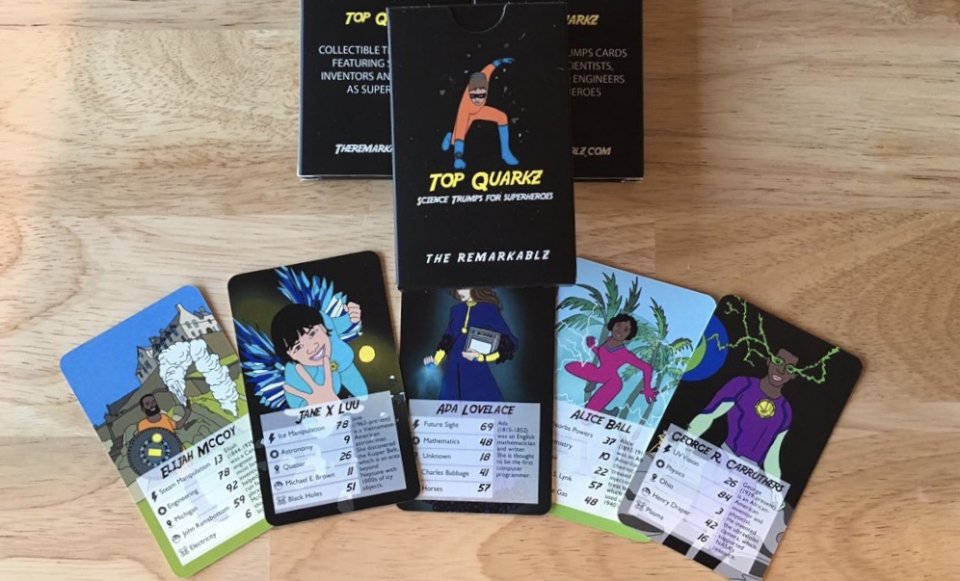 Alexander is not alone in her concern about the unhelpful messages that children are exposed to through toys and games. A 2017 global survey by The Future is FeMale found that 61 per cent of women and 46 per cent of men believe that children should be raised as gender-neutral to protect against arbitrary gender boundaries.

Despite the best efforts of entrepreneurs like Alexander, parents are still limited when it comes to finding children’s books and games with diverse characters and storylines, while the availability of gender-neutral toys remains poor.

“There are limiting messages that manufacturers and retailers are still, too often, sending,” says Andrew Bazeley from women’s rights group, the Fawcett Society, pointing out that the way retailers market certain toys entrenches gender stereotypes.

If you browse many mainstream toy shops, you’ll still find pink-washed “girls” sections that are rife with dolls, make-up kits, and kitchen playsets. It’s not that these types of toys are bad in themselves, but retailers persistently target one gender, reinforcing damaging stereotypes about what girls and boys should or should not do.

“A kitchen playset is a great toy – we all need to eat – but if it is decorated with unicorns or marketed to ‘princesses’, with only girls on the box, it sends a clear message that this is not for boys,” says Bazeley. “The same goes for a child’s T-shirt that is covered in robots and slogans about adventure, and positioned in a segregated ‘boys’ aisle of the store. Taken together, there is a clear message that adventure and science are not for girls.”

This might seem inconsequential when children are small, but it’s clearly a problem if they are deterred from pursuing certain careers purely because of their gender. And it’s not the fault of the parents, who rely on stores to take them to the right place, only to find aisles split by gender.

Alexander tells me that by three, children start to self-identify themselves as a boy or a girl, soaking in cultural norms of how they are “supposed” to behave. Ingrained in us from such a young age, by the time we’re adults, we don’t realise how our lives have been influenced by this rigid way of thinking.

In a Barbie world

So in an era where gender equality has become a central concern, is the toy industry moving in the right direction?

Let’s look at Barbie – the iconic doll that celebrated its sixtieth birthday last week, and which has frequently come under fire for promoting unhealthy – and biologically impossible – beauty ideals (in the 60s, “Slumber Party Barbie” came with a diet book and some weighing scales set at a bony 110lbs).

Over recent years, manufacturer Mattel has made efforts to bring the doll into this century, for example, by introducing “Engineering Barbie”. Giving Barbie a career where women are woefully sparse is a step in the right direction. But alas, Mattel managed to miss the mark by limiting Barbie to building domestic items like washing machines and clothes rails.

Mattel has since launched its Robotics Engineer doll, which comes with its own laptop to encourage kids to code, proving that progress is being made, albeit slowly.

“In her 60 years, Barbie in particular has had over 200 careers, allowing children to role-play a variety of aspirational roles, including Beekeeper, Robotics Engineer, and Pet Vet to name a few,” says Natasha Crookes from the British Toy and Hobby Association.

Looking at the wider toy industry, she argues that there is plenty of choice to empower both boys and girls. “With 47,000 new toys introduced to the UK market last year, there is a great range of toys, such as doctor or science kits, which are a great way of inspiring children from a young age.”

However, with huge swathes of choice, there is still an issue in how these toys are sold and marketed.

You might think that we are coming to the end of the ideology of pretty princesses and macho action men, but that’s not the case. The current pink-blue divide in the toy aisles actually began in the late 80s, according to Tessa Trabue from campaign group Let Toys Be Toys. As she points out: “There remains a strong gender divide when it comes to the way toys are marketed to children.”

Even more worrying is research by Dr Elizabeth Sweet, which found that toys are far more gendered now than they were 50 years ago, when sex discrimination was normal.

According to Sweet, princess toys, which have become ubiquitous among girls today, were actually very rare before the 1990s.

Certain retailers, such as John Lewis, have recently stopped explicitly categorising toys as being “for boys” or “for girls”, while Let Toys Be Toys has persuaded some UK stores and book publishers to remove the gendered signs.

But there is still some way to go. “We would like to see toy packaging, catalogue images, and TV adverts featuring both boys and girls playing with the toys (like they do in real life) along with the use of a wider range of colours in product packaging and advertising,” says Trabue.

Children, she says, should not be put off by labels indicating that a toy is not them – they should have the freedom to choose toys that interest them, free from gender stereotypes.

Going back to Alexander, her experience shows how parents can become desensitised to this issue – culture conditions us to subconsciously accept that this is the way things are, without considering that certain messages could be damaging. Sometimes, it can take a child to question the status quo for adults to try to challenge things.

Katy Alexander and her daughter certainly did, but it’s time for the industry to follow suit.