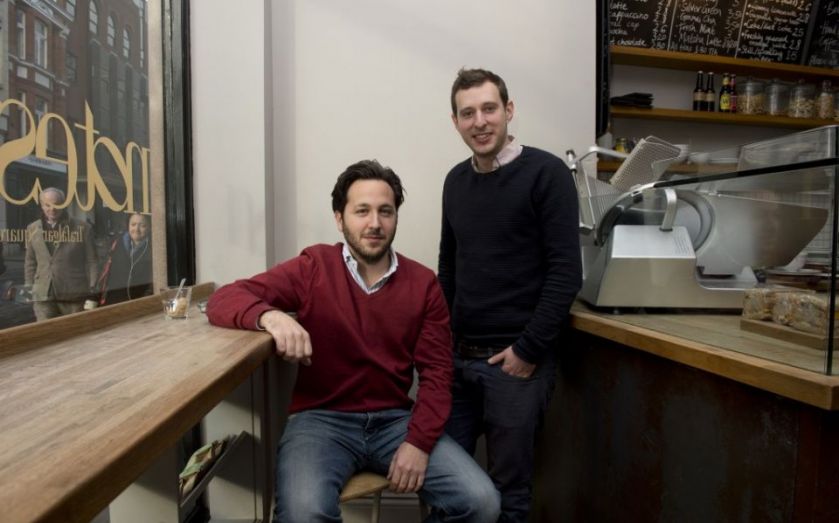 Mass-produced coffee is out: new, hip speciality cafes are in. Former financier Edward Halfon tells Annabel Denham how the founders of food and wine “destination” Notes plan to indulge our ever-evolving taste buds.

Recent research from the small business website Startups.co.uk found that “cult cafes” will become the hottest business opportunity over the next 12 months. Consumers, it concludes, are “looking to coffee shops as a social venue rather than a place to simply purchase a latte,” making 2015 a “great year” to enter the industry. And new entrants needn’t worry about the 16,000 cafes that already exist across the country – the total UK coffee shop market was worth £6.2bn in 2013, with 6.4 per cent sales growth on 2012.

One such outlet is Notes, the coffee and wine destination once described by House & Garden as the “Heston Blumenthal of coffee”. In a charming, fortuitous encounter, founders Robert Robertson (who had previously franchised Alto Coffee here in London) and Fabio Ferreira (who, inspired by his grandparents’ coffee farm, took the beverage up as a hobby in 2007) first met when Robertson served Ferreira a coffee from his Victoria-based cart. Ferreira may have loved the concept, but the former barista was far from convinced by the product itself. The two got talking, and by 2008 had started up a coffee cart business of their own.
Two years later, Robertson and Ferreira were introduced to Alan Goulden, who owned a music store on St Martin’s Lane. From there, the concept of a shop that would offer both speciality coffee and music and DVDs was born. Yet in one respect, the timing of Notes’s launch couldn’t have been worse. It was 2010, and the CD and other optical discs (like DVDs and Blu-rays) were going the way of the floppy disc. Apple had just announced its Mac App Store – with every app distributed over the internet. Its beloved Macbook Airs didn’t even feature a disc drive. Clearly, Notes would have to retract its musical concept.

By 2012 the business had acquired a new director: Edward Halfon. Halfon’s father had been a friend of Golden’s and an initial investor in Notes, and Ed’s own experience would prove invaluable to a startup in the food and drinks industry. He had previously specialised in the leisure sector at Rothschild for eight years, working on the acquisitions of Carluccio’s, Strada and Wagamama.
His story poses an interesting question: can you ever feel the same passion for a business if you’re not there at its inception? Certainly, you suspect Halfon played an integral role in the move away from music and towards a coffee, food and wine destination that would serve the needs of latte afficionados during the day, and those seeking a pre-theatre tipple at night. 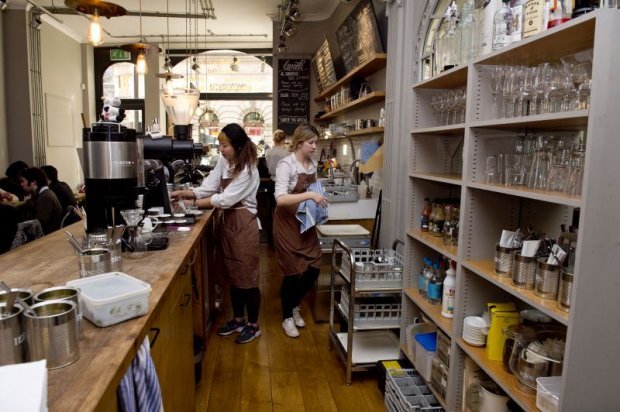 And the former financier shares the exact same fears and pressures as the three co-founders. He jumped ship from a role in investment banking that he “really enjoyed” and one that meant he could “actually switch off on holiday. Notes is much more personal to me – this time I’m building something. When I get home, I think about it. This is 365 days of the year.”
He worried, for example, that the founders had underestimated the capital needed to successfully roll out the business. While Halfon Snr and Goulden had made initial investments, “there’s always operational cash needed in a business, and until you fully understand your fit-out costs, you’ll underplay it.” And his prior experiences had taught him that success in this sector depended on three factors: concept, funding and location. Failure to acquire all three in equal measure will mean your business “does not work”.
Nonetheless, Halfon is modest about the impact his appointment has had on the company’s growth. “I think I added operational tightness and some perspective on strategy. I’d looked at a lot of restaurant portfolios, and it gave me a sense of what locations would work well for a business like this,” he admits. And since he joined, Notes has opened a City branch. A further two more shops will launch in Canary Wharf this spring. And the founders have now invested in their own roastery to completely control their core offering, and “differentiate ourselves from their sub-section of the quality coffee market”.

It may seem odd that a business which set out to disrupt an industry where “chain stores ruled the roost” would scale up so quickly. “We are becoming more mass,” Halfon admits. “But we are not a homogenous brand. We look at the characteristics of every site, and try to create a different environment in each. The big, traditional chains are delivering a consistent, normal and very quick product. Their services are excellent, but we are more specialist – and that’s where people are looking to go.”
It’s a trend being felt throughout the food and drink industry in London, Halfon believes. “There’s a movement away from traditional chains to new emergents: small micro-chains.” So we’re choosing Benugo’s over Pizza Express? “That’s one example, yes. I think that the London consumer is looking for something more specialist, something more of-the-moment,” he says.
As for Notes, the ultimate goal is to grow its roastery, increase third-party sales, and build the brand across the capital. “After we’ve expanded across central London, we’ll start looking at the more residential postcodes, and see if a Notes in one of those areas works.” The company did experiment in Leeds, but it “just didn’t work – although I think that was more a reflection on poor location than the Leeds market”. The experience brings Halfon back to one of his core beliefs: “when people say location is everything, they’re not exaggerating. It’s vital”.
And finally, I can’t help but ask, what’s his favourite thing on the Notes menu? “Flat whites – I can’t resist,” he chuckles.