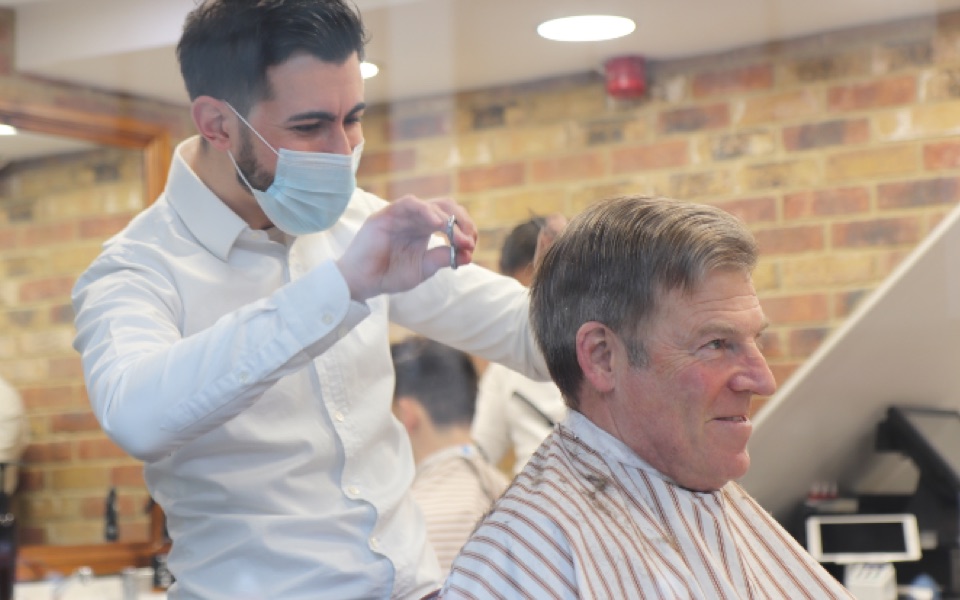 As the City officially reopened this morning, the Lord Mayor embarked on a tour of the businesses that have opened their doors after months behind shutters.

While still noticeably quieter than pre-pandemic, it was heartening to see the City return to some kind of normalcy, with the streets busier than they have been for months.

Lord Mayor of London William Russell began his day the way many of us plan to kickstart our return to the office: with a haircut. He visited Ali, his barber of 6 years, at the Grooming Lounge near the Barbican.

Other stops on his morning trip included Haberdashers Hall for a “socially distanced catch up” with Master Haberdasher Daniel Hochberg and Clerk Brigadier Angus Watson MBE; a visit to 22 Bishopsgate, the newest and tallest tower in the City; and a stop at RSH Partners at the Leadenhall building, where Angelo Chrstou, property director for Leadenhall Building, showed him the adaptations that have been made to support returning tenants.

It is the beginning of a months-long campaign by the City of London Corporation to support local business and help institutions welcome back staff.

The City of London Corporation today announced a new Covid Business Recovery Fund of up to £50m aimed at SMEs. It is also supporting businesses by allowing them to make use of open areas through its Al Fresco Eating and Drinking Policy, issuing pavement licenses free of charge.

The Lord Mayor said: “This is a move in the right direction towards returning the Square Mile to the vibrant and thriving ecosystem that it always has been.

“Businesses have been working extremely hard to ensure that they are able to welcome back visitors and workers in the safest way possible, whilst still maintaining the buzz and vibrancy we have all missed so much. More workers, visitors and residents will be supporting these local City businesses and institutions as they emerge from lockdown.”

Cities across the country reported strong trading in the first few hours of this morning, with footfall in shopping centres jumping nearly 340 per cent compared with last week, according to the latest data from Springboard.

Footfall on high streets was up 233 per cent, while retail parks saw a 58 per cent week-on-week increase.