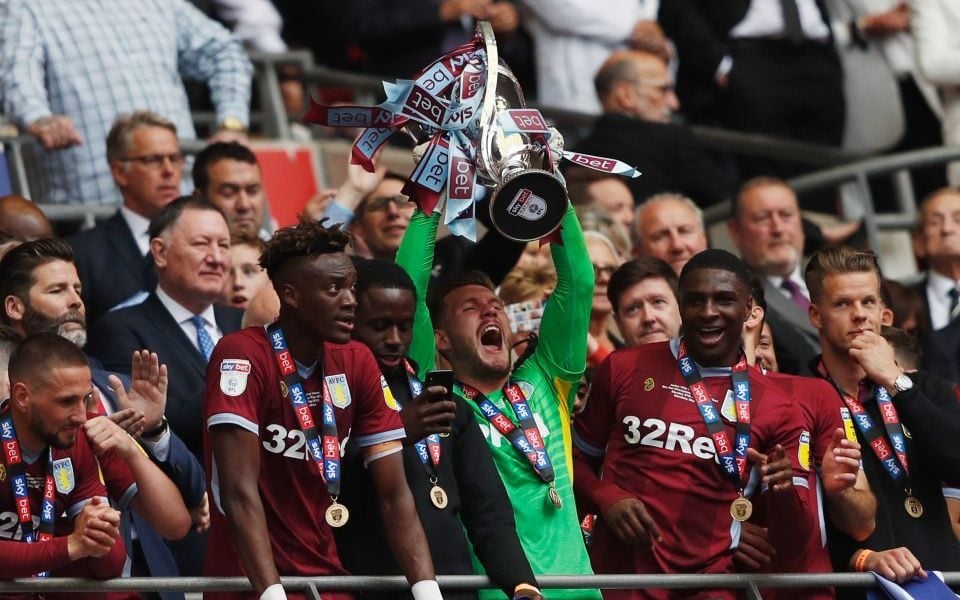 It tends to take a gamble to escape the bear pit of the Championship. Aston Villa have bet bigger than most and now, with victory in the play-off final over Derby County on Monday, they have scooped the £170m jackpot that promotion to the Premier League guarantees.

Villa were rewarded for rolling the dice on the day, carrying the fight through captain Jack Grealish and winger Anwar El Ghazi, who met Ahmed Elmohamady’s cross for the opening goal just before half-time.

By the time Derby had landed a blow themselves, through substitute Jack Marriott’s smart low strike in the 81st minute, it was too late.

This was also reward for the decision to sack Steve Bruce just 13 games in the season and replace him with Dean Smith, a less well-known name but a manager respected for his work at Walsall and Brentford.

A lifelong Villa supporter who grew up in the club’s Birmingham heartlands, Smith struggled to turn the team around at first but struck gold with a 10-game winning run spanning March and April that propelled them back into promotion contention.

El Ghazi scored Villa's first and is one of several on-loan stars of the team (Source: Getty)

Villa’s calculated risks go back further still. Their squad is stacked with former Premier League players, but that comes at a considerable cost.

It is the second most expensively assembled in the division, after Stoke, and last season led to a £71m wage bill – higher than Wolves and Fulham, who successfully bet the house on going up.

This year it has also been bolstered by high-profile loan signings such as El Ghazi, Tyrone Mings, Tammy Abraham and Axel Tuanzebe. While El Ghazi provided the cutting edge against Derby, centre-back Mings was superb in shutting out the Rams.

The consequences of all this are enormous. Villa are assured of at least £170m for returning to the big time after a three-year absence: a minimum of around £95m even if they come last next season and more if they finish higher, plus approximately £85m in parachute payments to soften the financial blow of relegation if they suffer the drop again.

In all likelihood it will be worth considerably more to Villa, while their promotion will also help to render questions about their compliance with the English Football League’s financial fair play rules close to irrelevant.

Can they stay up? They will want to retain the key loan players behind their resurgence, namely Mings, Abraham – whose availability may be complicated by his parent club Chelsea’s current threat of a transfer ban – and El Ghazi, who is owned by Lille.

Now Villa have the funds to make those deals happen. Wolves followed a similar path with the likes of Raul Jimenez, Ruben Neves and Jonny Castro. They may not like it, but Villa might want to take a leaf out of their West Midlands rivals’ book.