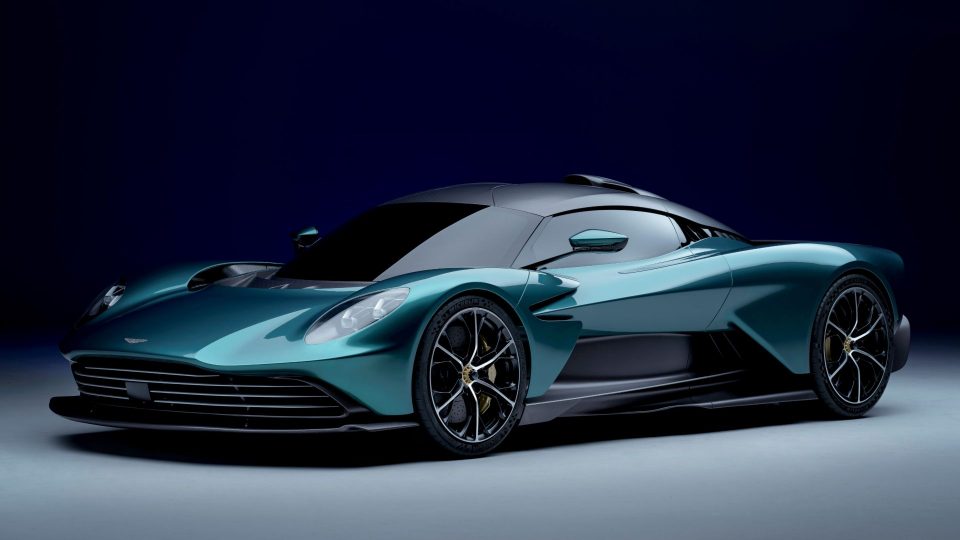 Aston Martin has traditionally been defined by brutish, front-engined GT cars. Think Sean Connery in a DB5, Pierce Brosnan in a Vanquish or Daniel Craig in a DBS. Now, the British brand has aimed its Walther PPK straight at Ferrari – and it has a view to a kill.

Fittingly, our first glimpse of the Valhalla was at Silverstone, home of the Aston Martin Cognizant F1 team. This Sunday, the circuit hosts Aston’s return to the British Grand Prix after more than 60 years.

But first, there are Covid-friendly elbow-bumps, drinks, speeches and – finally – a new supercar to swoon over.

Supercar? Frankly, the Valkyrie accelerates headlong through the glass ceiling into hypercar territory. The combined punch of its 4.0-litre twin-turbo V8 and 150kW battery pack serves up 950hp and a mighty 1,000Nm (738lb ft) of torque.

The flat-plane V8 contributes 750hp and revs to 7,200rpm. It drives the rear wheels and breathes through top-exit tailpipes for an ‘authentic Aston Martin sound character’.

The remaining 200hp of electric drive is split between front and rear axle motors, with up to 100 percent sent rearwards for maximum performance. The headline figures are 0-62mph in 2.5 seconds and a top speed of 217mph.

Aston Martin is also targeting a Nurburgring lap-time of less than 6min 30sec. For context, the current road-legal record is 6min 38.8sec, set by a Manthey-modified Porsche 911 GT2 RS.

When you aren’t blitzing Bergwerk or nudging Vmax at Döttinger Höhe, the Valhalla offers a zero-emissions range of 9.3 miles: key to achieving predicted CO2 emissions of just 200g/km.

Top speed in EV mode is 80mph and the electric motors also function as a reverse gear.

The other key component of the powertrain is a new – and fiendishly complex – eight-speed dual-clutch transmission. Impressively, the V8 and electric motors can run different gears simultaneously to boost torque.

The Valhalla’s sculpted, dramatic styling is little changed from the AM-RB 003 concept car, first seen at the Geneva Motor Show in 2019. Unmistakably mid-engined, it resembles the love child of a Le Mans prototype and Typhoon fighter.

A slatted grille is perhaps the only hat-tip to Astons of old, framed by full LED matrix headlights and a jutting splitter. A roof scoop and slash-cut side vents feed air directly to the hungry V8.

Access is via upwards-opening dihedral doors, while the lack of a rear window means relying on the surround-view cameras (and possibly prayer) for parking manoeuvres. Mind that carbon fibre…

The car’s interior hasn’t been revealed yet, but we’re promised an ‘innovative new central touchscreen’ with Apple CarPlay and Android Auto connectivity. The seat bases are fixed, so you adjust the pedals and steering column to find the right driving position.

A target dry weight of ‘less than 1,550kg’ undercuts the SF90, even if the Italian car has the lightweight Assetto Fiorano pack fitted. ‘F1 inspired’ active aerodynamics and underbody venturi tunnels muster 600kg of downforce at 150mph.

The Valhalla’s carbon tub is suspended by pushrods at the front and a multi-link design at the rear, with inboard components to reduce unsprung mass. Multimatic variable springs and spool valve dampers ‒ also seen on the Aston Martin Vulcan – provide a range of adjustment, including a belly-scraping Track mode.

Tyres are bespoke Michelins (20-inch front, 21-inch rear) and the Valhalla is reined in by huge carbon-ceramic discs with brake-by-wire tech.

Want one? Expect to stump up somewhere between £600,000 and £700,000 and join a long waiting list. The first year of a two-year production run is already sold out, and deliveries won’t begin until 2024.

New Aston Martin CEO Tobias Moers said: “With Valhalla, not only have we stayed true to our commitment to build a world-beating supercar, but we have exceeded our original aims. The result is a pure driving machine – one which exists right at the cutting edge of performance and technology, yet allows the driver to feel the emotion and thrill of complete connection and control.”

It all adds up, we hope, to an era-defining supercar that will leave you shaken and stirred (sorry, couldn’t resist).

Look out for the Valhalla’s screen debut in No Time to Die this September.