The anti-vax movement is a symptom of our expert malaise 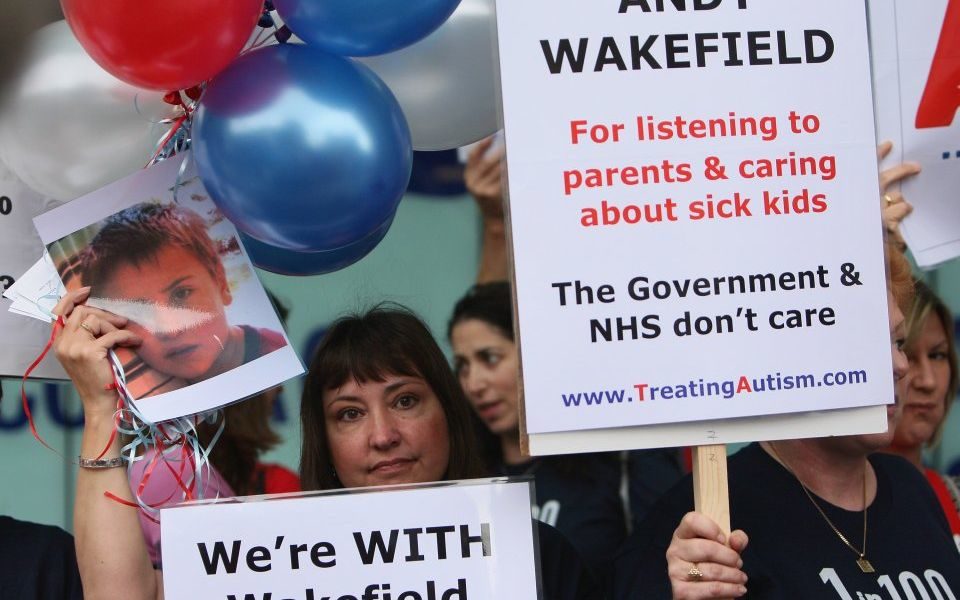 The anti-vaccination movement is deadly.

According to the charity Unicef, more than half a million UK children were not vaccinated against measles, a highly dangerous but preventable disease, between 2010 and 2017 – which is part of a terrifying global trend.

When less than 95 per cent of a population are vaccinated, herd immunity is weakened, putting people who can’t have the vaccine – babies, the elderly, those with health conditions – at risk. Parents who choose not to vaccinate are not only potentially harming their own children, but the rest of society.

In the first three months of 2019, worldwide cases of measles were up 300 per cent on the year before. Once considered virtually wiped out, measles can not only cause brain damage, but is sometimes fatal.

Anxiety about vaccinations is as old as this medical miracle itself. But the measles hysteria is primarily the tragic consequence of Andrew Wakefield’s debunked 1998 claim that there was a link between the vaccine and autism.

His so-called “research” has been proven utterly false, and Wakefield was struck off the medical register for misconduct. Nonetheless, a decade after he was exposed as a fraud, the “anti-vax” movement continues to gain momentum. It has, to coin a phrase, gone viral.

Social media is not the cause of this conspiracy theory, but it has breathed new life into it. Posts and videos by anti-vax activists rack up millions of views on mainstream sites like Youtube and Facebook, targeting anxious parents.

We know how these platforms work: to keep users clicking, algorithms direct them to the content they will find most compelling – which has enabled anti-vaxxers to hoover up vast followings of people most susceptible to their toxic lies.

The response has been to demand action from the tech companies. NHS chief Simon Stevens called this week for a “zero tolerance” policy by social media platforms towards anti-vax content, and health secretary Matt Hancock (who, as the former digital secretary, knows his way around this sphere) echoed him.

They are almost certainly right, but to adopt a whack-a-mole approach to harmful content misses recognising the wider question of why these views proliferate in the face of page after page of legitimate, evidence-based, verifiable science.

When Michael Gove said in 2016 that people “have had enough of experts”, he wasn’t talking about vaccines, but about Brexit, and the concerns of “experts” about risks to the economy. But he inadvertently hit on something much wider.

The world wide web, which celebrated its thirtieth anniversary last month, opened up a world of knowledge, breaking down the barriers to those who wanted to both access and provide information, and connecting like-minded individuals, however obscure their views.

It gave a voice to minority groups long kept out of the public arena, questioning the infallibility of politicians and elites and enabling alternative perspectives to be heard.

The problem is that not all perspectives are created equal.

We know, intuitively, to place more credibility on a teacher who demonstrates that two plus two equals four than a child who believes it is five, on an engineer who warns that a building isn’t safe than a teenager who insists that it is, on a doctor with a decade of medical training recommending a treatment than a patient going on gut instinct.

The internet allowed us to challenge the experts, but at some point healthy scepticism of authority morphed into knee-jerk hostility to people who understand things we don’t.

Maybe we should blame the financial crisis – a catastrophic risk missed by virtually every government and economic institution – or maybe this is the inevitable result of a new, filterless method of communication that allows sensationalist falsehoods to spread faster than facts.

But attitudes changed. Justifiable criticism of political spin and the arrogance of officials became widespread distrust not only of governments, but of anyone deemed the “establishment”, including those claiming expert knowledge.

All opinions became valid, and media “balance” went from giving both sides the attention they warranted based on their merits, to elevating the quack theories of an opinionated lay-person with a substantial online following to the level of qualified experts with years of experience.

If you don’t like the facts, choose your own “alternative facts”, to quote an adviser to the US President (who, incidentally, tweeted anti-vax myths prior to his election).

Recognising this does not mean promoting censorship or arguing that the “experts” – whoever they may be – should be believed unthinkingly. But whether dealing with politics or medicine, perhaps we need to give a bit more thought to how those people became experts, and the relative weight we should put on their opinions versus that of their opponents.

Gove’s infamous quote is rarely offered in full, but what he actually said was that people in Britain “have had enough of experts getting things wrong”.

When it comes to medical science, the experts are right – and the tech giants shouldn’t legitimise those who are so dangerously wrong by perpetuating the myth that all viewpoints are equally valid, even when one of them is based on science, and one of them costs lives.