What Anthony Scaramucci did next 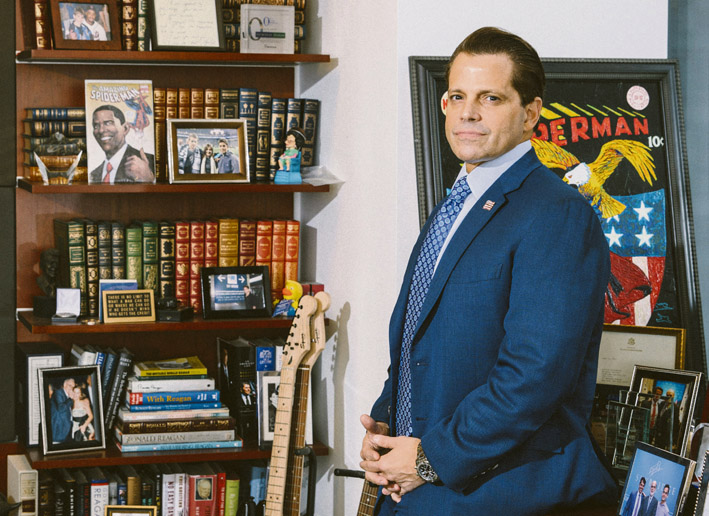 After a brief and calamitous stint in the White House catapulted him to international fame, Anthony Scaramucci is back at SkyBridge Capital, the hedge fund he founded in 2005, he has revealed in an interview with Opto magazine.

For a brief period in July 2017, Anthony Scaramucci found himself at the centre of American politics. Abrupt, frenetic and referring to himself as “The Mooch”, he quickly became one of the most memorable characters in the ongoing Donald Trump soap opera, despite spending just 11 days in the White House.

Before joining the US president’s administration, he put SkyBridge Capital – a hedge fund with billions under management that he had spent 12 years building – up for sale in order to “serve”. Having campaigned for Donald Trump, Scaramucci worked on the team managing the transition of power from the Obama administration. He then spent the first six months of Trump’s presidency on the periphery, blocked by insiders from moving into a position of influence.

That all changed, however, when he suddenly landed the role of communications director – reporting directly to the President – despite an almost complete absence of communications experience other than TV pundit appearances and a stint presenting Wall Street Week on Fox.

It was a strange appointment for other reasons, too. Scaramucci was known for having an outspoken, love-hate relationship with the media. And so it proved. Two days into his tenure, Scaramucci gave an interview to the BBC bemoaning “the back-stabbing that goes on” in Washington. “Where I grew up, we’re front stabbers,” he said, launching a tirade against “leakers”.

Shortly afterwards, another government leak was reported in The New Yorker by Ryan Lizza. Scaramucci had been acquainted with the journalist for a number of years and called him, demanding that he reveal the source of the leak. Scaramucci didn’t hold back, telling Lizza he wanted to “f**king kill all the leakers”. “I’m not Steve Bannon, I’m not trying to suck my own c**k,” he went on, before calling Reince Priebus a “f***ing paranoid schizophrenic”. (As chief of strategy and chief of staff, respectively, both had vehemently opposed Scaramucci’s appointment.) While Scaramucci maintains that the call was off the record, Lizza says otherwise.

Scaramucci did in fact successfully oust Priebus. But in doing so, he put the final nail in the coffin of his nascent White House career: three days later John Kelly was appointed as Priebus’s replacement and ordered Scaramucci be fired.

Nonetheless, his time as director of communications made him a celebrity, with about 55 per cent of the US population recognising his name.

“These Washington jokesters went, ‘OK, that’s the end of him.’ But they don’t know me. And that’s not the end of me. These guys accidentally gave me a higher profile and a bigger voice in the conversation,” he says.

He seems to be enjoying the limelight: he frequently appears in the media, has released a new book about Donald Trump’s Presidency, and launched a podcast with his wife, Deidre Ball, a vocal Democrat supporter.

He is also back at SkyBridge Capital, which he pledged to “make fun again”, after returning to the helm. The time Scaramucci spent in Washington was, perhaps fortuitously, not long enough for the sale of SkyBridge to Chinese buyers to go through.

But while much has been written about Scaramucci’s stint in the White House and his colourful personality, there’s very little focus on his career as a hedge-fund owner.

In stark contrast to starting his first day as the White House communications director with “a chainsaw and a hockey mask on” – a move that he now admits was probably the wrong one – Scaramucci has been cautious and calculated in his money-management career.

“As a money manager, the most important thing is compound interest and just staying in the game; recognising that the tortoise is going to win the race,” he says.

For the most part, this has served Scaramucci handsomely. While the hedge-fund industry suffered a brutal 2018, with four per cent losses on average, SkyBridge’s public fund made a 3.2 per cent gain. But his cautiousness also led to passing on a huge opportunity he now puts down as one of his biggest mistakes in finance: not buying Uber.

“I had an opportunity to buy into Uber at a $25m (£18.9m) valuation,” he says. “But when they came in with the business plan my reaction was that they were nuts. I thought: ‘I’m not going to put my wife or my daughter in a car with a stranger that nobody knows.’ My daughter now has the highest Uber bill in the world! I totally missed that opportunity.

“The money that I could have put in there would have been worth my entire personal fortune 10 times over. So I would say my mistakes are more in caution and missing unicorn opportunities.”

Nonetheless, the episode encapsulates Scaramucci’s view of money management: “I would rather make less money and delay gratification to ensure my clients are in a very steady ship.”

Before launching SkyBridge in 2005, Scaramucci had already set up and sold his first fund, Oscar Capital Management, to Neuberger Berman, which was in turn purchased by Lehman Brothers in 2003.

In 2010, SkyBridge acquired Citigroup’s hedge-fund business. And on the back of the financial crisis Scaramucci made the decision to diversify, launching the SALT (SkyBridge Alternatives) conference in Las Vegas, an annual event which “facilitates discussions and debates on macro-economic trends, geo-political events and alternative investment opportunities”.

Presidents George W Bush and Bill Clinton are former speakers at the event.

A fund of funds

SkyBridge’s main fund is a fund of funds, whereby investments are made into a collection of specialist funds and money managers, rather than directly into assets. Scaramucci isn’t a fan of the term, however.

“The way I look at our business model, we are an outsourced multi-strat. Rather than having an internal mechanism with internal managers, I go with the best and the brightest in different sectors.

“That way I can decide where we’d like to be, and then allocate funds to the best managers in that industry. Then, if we don’t like those sectors anymore, we can take the money away without any of the internal politics.”

Most recently, leveraging Scaramucci’s knowledge of new tax codes that were developed while he was in the White House, SkyBridge launched a fund that invests in property in lower-income "Qualified Opportunity Zones". Created by a 2017 Tax Act, the scheme enables any fund that invests more than 90 per cent of its money into ailing areas to receive 10 years of tax-free returns.

"We launched in December and have already raised a tonne of money for it. I think we can raise $2-3bn in total. I’m super excited,” he says, adding that the ability to take advantage of opportunities such as this is one way hedge funds maintain their edge.

As a “blue-collar kid who grew up with nothing”, Scaramucci says the Opportunity Zone investment represents a way in which “Wall Street can help Main Street”.

“For some reason, regulators think that richer people are more sophisticated than poorer people,” he says.

“I tell my elitist friends, ‘You think you're that smart? The kids in my neighbourhood are as smart as you, their dads just weren’t doctors or Wall Street bankers who provided you with the opportunities you had.’”

Scaramucci says his charges are among the lowest: “We have lower fees than some of the multi-strategy hedge funds we compete with. Through our scale we negotiate down underlying manager fees on behalf of our clients.”

His background also forms the principles on which Scaramucci runs SkyBridge, and who works for him.

“In my business, the only thing that really matters for someone like me are your ethics. If I watched my father take his lunch out of the refrigerator and go to work at four o'clock in the morning and do everything right: paid his taxes, tried to raise his family, played everything straight; you're not coming into my shop at SkyBridge Capital and doing things wrong. We're not going to do anything in this organisation to hurt my father's last name, under any circumstances.”

Scaramucci grew up on Long Island, the son of a construction worker – and has an accent to prove it.

“I hustled my way into Tufts [University] and Harvard Law School,” he says.

As with all of Scaramucci’s endeavours outside politics, he often puts complete trust in others to run the business. At SkyBridge his core money management team has been with the fund for 14 years.

“You have to have the capacity to delegate. The employees of one of my competitors call him ‘The Bottleneck’, because every single decision inside the firm has to pass through him. It means he’s anchored to his desk and everyone else in the company is slowed down," he says.

“You have to allow your employees to make autonomous decisions. They have to take ownership. As part of this you’ve got to put your people in a position where they can fail or rise on their own ambition or own work ethic.”

Scaramucci adds: “I take a lot of pride in being able to recruit people, retain people and empower people. At the end of the day, I want the kinds of people who view this as a mission rather than just some job,” he says, arguing that the culture of teamwork and empowerment is one that stands in stark contrast to his experiences in Washington.

“Politics is not a team sport,” he says.

“It’s more like tennis, where you're going to have to beat each other’s brains in at a tournament. There’s a race to the top. I didn't expect people to act the way they did. These guys are on my own team. I didn't expect them to turn on me.

“The winning people in business are about collaboration and creating win-win situations, whereas in Washington it’s zero-sum. And let me stab your eye ball out while I’m at it.”

‘I didn’t understand the viciousness’

So why did Scaramucci enter the White House in the first place? “Stupidity,” is his simple answer. He likens his decision to the 1939 comedy film Mr Smith Goes To Washington, in which a new senator attempts to single-handedly change a corrupt political system.

“When a buddy of yours wins the presidency and asks you to go work for him, you think it’s part of the American dream. I thought, ‘I’m going to go there, try to do a good job, and try and help people who had similar upbringing to me.’

With the gift of hindsight, Scaramucci believes that staying involved in the White House after “forces in the administration blocked my getting a job at the start” was a mistake.

But it was one that taught him some valuable lessons.

“It made me understand you can’t let your ego infect your decision-making because, once it does, you end up doing regrettable things,” he says.

“I should have dropped it. But I got my ego involved, and I kept pushing to get a job.

“At the end of the day, you have to be resilient. And you have to forgive yourself. You can't sit there and think, ‘Oh shit, 18 months ago I got fired from the White House for a mistake I made, let me kick myself today.’ I’m not doing that. I’ve dusted myself off, no whining, no complaining, I’m moving on.”