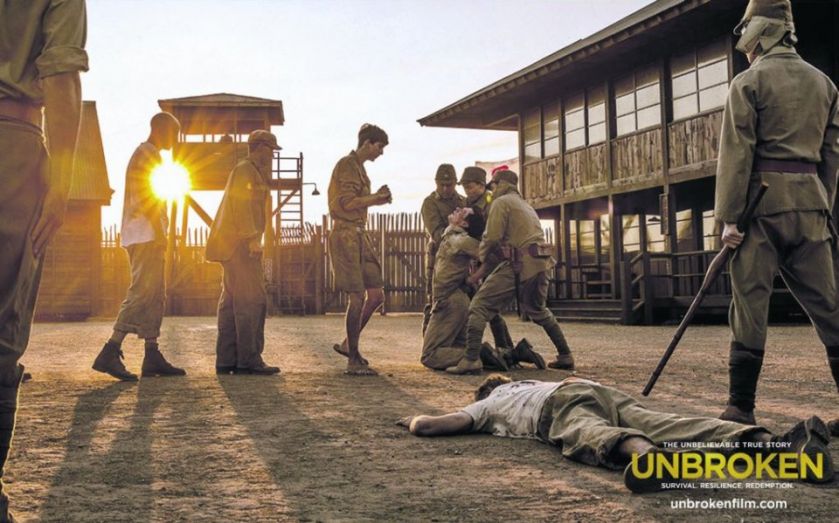 Unbroken is the inspirational story of one side-parting’s survival against the odds. Global conflict, aviation disaster, regular beatings from a sadistic Japanese prison guard nicknamed “the Bird” – the list of hardships endured by this hairstyle makes for harrowing reading. The hardy parting even survives 40 days at sea in a tiny life-raft without so much as a comb to sustain it in its indomitable quest for nattiness.
Angelina Jolie’s directorial debut, a biopic of the extraordinary war hero and Olympic runner Louie Zamporini, suffers from an unwillingness to get a hair out of place. The first scene, a WW2 gun battle somewhere over the Pacific, feels like a fashion shoot for which the phrases “Tuscan leather” and “The Spirit of Adventure” feature prominently on the mood board. I half expected it to finish with pilot Jai Courtney diverting his gaze directly into the camera and whispering “pour homme”.
There's an expensive sheen, but instead of that Spielbergian gloss that draws us into a more inviting, emotionally heightened version of the real world, the effect is to distance us from the horror of what Zamporini is forced to endure. And he had to endure a lot.
A first generation Italian-American, he overcame a childhood of bullying and racism to make it to the Berlin Olympics in 1936 where he was the best performing American long distance runner. During the Second World War his plane crash landed in the Pacific. After 40 days in a life raft he was captured by the Japanese and thrown into a notorious prisoner of war camp where he was routinely beaten and subjected to mock executions and torture.
Anyone excited at the prospect of an insight into the mind of one of Hollywood's more enigmatic figures will be disappointed. Who knew that tattooed, formerly drug-addled Jolie’s artistic vision would resemble a drearily on-beat Forrest Gump. I say artistic vision; in truth there’s virtually no authorial stamp whatsoever, a fact that may be explained by the source material. Zamporini’s extraordinary story needs little augmentation or elaboration; a film of his life was always going to be conventional. But there’s conventional, and there’s downright cliched; the gushing score, slo-mo running and repeated conversations about destiny lead Unbroken into the territory of the latter.
It's hard to dampen the nagging suspicion that this is an Angelina Jolie movie in the same way that Anna Wintour is the editor of Vogue – her name appears in the credits but it’s hard to imagine her getting down and dirty in the editing suite. In the absence of any auteurish flourishes, she relies on the natural drama of the story itself, which is a problem, because there isn’t much drama in someone suffering and suffering and suffering and suffering. By the time Zamporini has been moved to his second prisoner of war camp, you start to empathise a little too easily with someone forced to stay for mind-deadening stretches of time against their will in a dark room with nothing to look at but grubby American POWs.
As for the side-parting, it belongs to rising star Jack O’Connell, who, as Zamporini, gives the kind of committed performance for which he is becoming renowned. Muscular though his shoulders are, Unbroken is too big, bloated and unrelentingly heavy for him to carry on his own.