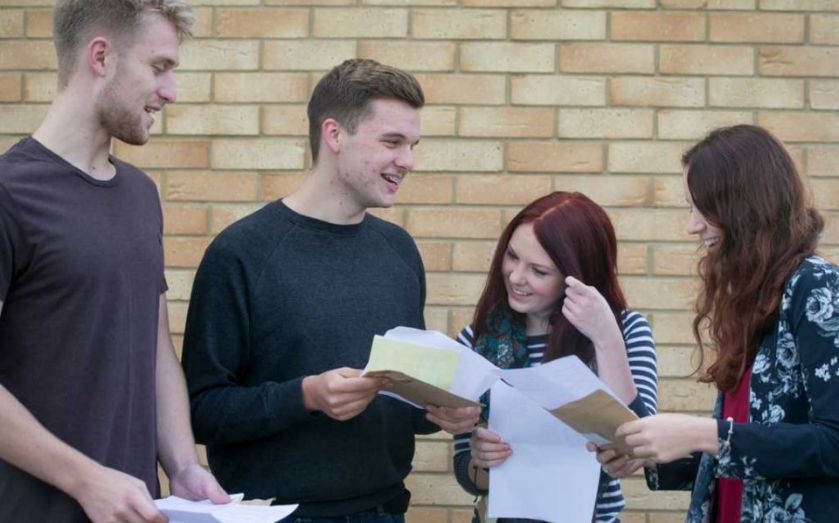 Thousands of teenagers – not to mention their parents – around the country will receive their A-Level results tomorrow and find out if they've made it to the educational institution of their choice.
As these students await the news, City A.M. has crunched the data from last year for all English schools where A-Levels were taken to establish where's the most likely place to get good grades.
On desktop computers, you can either repeatedly press "next" to see different comparisons of all schools or use the drop-down menu to find a particular school (or click on it on the map), which will then be shown as a larger amber-ringed dot on the map or graphs as you click through.
On mobile devices, you will be taken through the key findings automatically.
All data from Department from Education (DfE) for 2013-14.
[custom id="72"]
Under the Ucas points system, three A* grades at A-Level equates to 420 points. We’ve compared the points with the local authority (LA) funding schools get per student where that data is available. Not all top-performing institutions had the most funding while many with higher levels of funding did not achieve the best grades.
Looking at how much students progress during their A-Levels compared to a baseline, again a higher spend does not guarantee more student development in terms of grades.
Independents tended to be the top performing schools in terms of grades, even if their local authorities spent less per student than the mean. Only seven institutions had three-quarters of students with AAB grades or more, four of which are independents, two are academies, and one a general further educational college. Of the 116 schools in which all students passed, 66 are independents, 39 are academies, five are voluntary aided schools, three are foundation schools and three are community schools.
More often than not, those schools with over 50 per cent of students gaining at least AAB grades were able to improve their students’ performance.
At 53 per cent of schools, fewer than 10 per cent of students got AAB or higher and, at 32.5 per cent of schools, fewer than five per cent of students got AAB.
In response to the figures, a DfE spokesperson said: “We are ensuring schools across England are funded fairly so that all pupils, whatever their background and wherever they live in the country, have access to a good education.

“We have made considerable progress in reforming the school funding system. In 2014 an additional £390 million was allocated to boost 69 of the least fairly funded areas in the country in 2015 -16 – the biggest step toward fairer schools funding in 10 years.”