Administrators have closed 71 stores owned by Patisserie Holdings after the firm collapsed in late January, resulting in 920 redundancies.

A total of nine Patisserie Valerie branches have been shut down in London, with a further three Debenhams concessions closed.

The firm’s two Glasgow stores have been shuttered, along with branches in Manchester, Leeds, Liverpool and Newcastle.

Administrators at KPMG, who were appointed on 22 January after the high street bakery chain failed to come to an agreement with its lenders, said they were “pleased with the level of interest” they have received in the business.

David Costley-Wood, partner at KPMG and joint administrator, said: “Since our appointment less than 24 hours ago, we have been pleased with the level of interest we have received in the business, and so remain hopeful of achieving a positive outcome.

“In the meantime, we can reassure customers that across the remaining 122 stores, it is all but business as usual.”

Here are all the London Patisserie Valerie outlets that are closing: 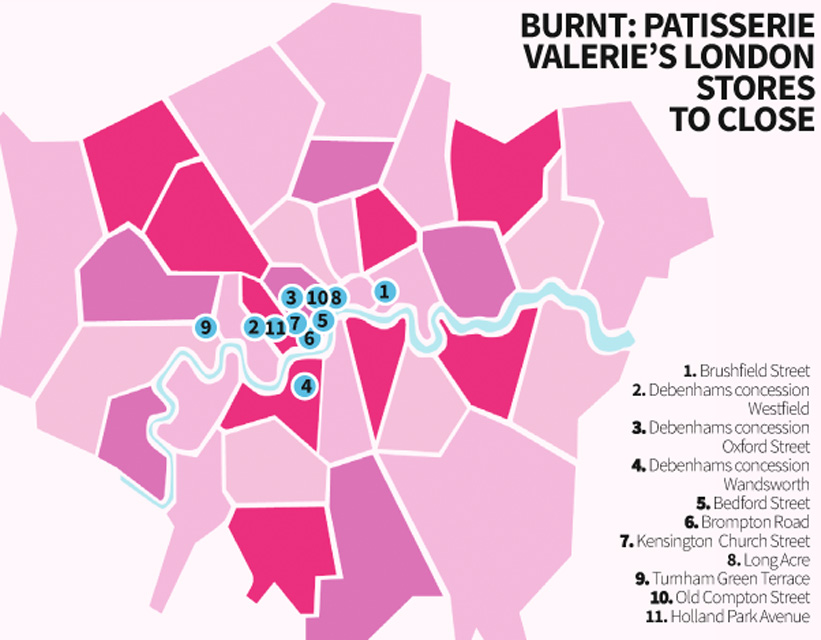 Wednesday 10 October: The cake maker withdraws its shares from AIM, suspends CFO Chris Marsh and warns investors of “significant, and potentially fraudulent, accounting irregularities” that have “impacted the company's cash position and may lead to a material change in its overall financial position.”

Friday 12 October: Chris Marsh is arrested and released on bail, as Serious Fraud Office (SFO) opens an investigation into fraud at the company.

Thursday 1 November: Extraordinary meeting of shareholders vote on rescue measures to dilute the value of shares as it issue new ones to raise more cash.

Monday 19 November: The cafe chain is given until 18 January 2019 to agree a loan facility with lenders.

Wednesday 16 January: “Devastating” balance sheet manipulation revealed, with thousands of fraudulent entries made in ledgers before missing sum, now discovered to be £40m, was noticed.

Wednesday 23rd January: KPMG closes 71 Patisserie Valerie branches as 920 out of 3,000 employees are made redundant. “Business as usual” to continue in remaining 122 outlets.