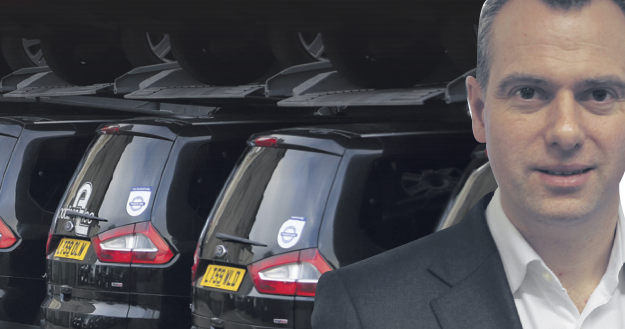 To an outsider Addison Lee might look like a company that’s losing momentum. Disruptive rival Uber has burst on to the scene, and defied recent attempts (in the UK, at least) to use the strong arm of regulators to clip its wings.

But Addison Lee insists that it had a great Christmas, and the minicab giant is about to launch an aggressive expansion campaign.

Under former chief exec Liam Griffin, Addison Lee described Uber’s system as the “worst of all possible worlds” as part of last year’s efforts to convince Transport for London to crack down on the tech firm – but new boss Andy Boland is ready to compete, rather than complain.

“We want a level playing field,” Boland tells City A.M. “We were being held to a set of requirements that Uber was not.”

Boland was brought in almost four months ago to lead the company’s fight against Uber, replacing Griffin who remains on the board as vice chairman, having been with the company for 20 years. Last month TfL opted to move forward with only the lightest of regulations, throwing out calls for the San Francisco mini cab app to be forced to wait five minutes before starting a journey once the car had been booked, and requiring it to offer a pre-booking service.

Boland is confident his firm can compete, and, when given the option, customers will choose Addison Lee. “The reality is we want to give customers choice,” Boland says.

His fleet currently boasts around 5,000 minicabs, paling in comparison to Uber’s 15,000 registered drivers in London. But this isn’t a problem according to Boland, who thinks customers still choose Addison Lee when they want a quality service. Boland says: “There are a lot more vehicles on the road now”, referring to an Addison Lee study that showed the number of new mini-cabs in London increasing by 56 per cent over the past two years.

“However, we turn away two thirds of the people that come to us wanting to be a driver. Having high standards on who gets to be a driver is important.”

While Uber’s rapid global invasion from its stronghold in San Francisco is unparalleled, Boland doesn’t think it’s too late to catch up. A full launch for Addison Lee in New York is now set for the end of the second quarter.

Following the firm’s soft launch in 2015 in the Big Apple, from the end of June this year New Yorkers will be able to download the app and book a full Addison Lee employed driver. European expansion is also on the cards. Addison Lee will be offering its app and fully employed drivers in Manchester and Edinburgh later this year, while elsewhere in Europe, Frankfurt, Munich and Milan will be added to the list. It already has what Boland calls “wheels on the ground” in Paris and a presence in Russia.

This sudden expansion, following almost zero ambition to expand beyond London’s borders in the company’s first 40 years, is backed by private equity owner Carlyle, who reportedly shelved plans for a £800m sale of the company in 2014.

Part of the expansion plans include broadening the company’s focus on its core business market, providing car hire services to some of the UK’s biggest firms.

“The absolute core of the business is still B2B, though the consumer market is developing strongly,” Boland says. “We are seeing people doing more instant bookings every month.”

Its app bookings were up 40 per cent in 2015 compared with a year before. The mini-cab company is not the first mover in this industry, however, and nor does it want to be.

Read more: Addison Lee introduces feature allowing you to "snooze" your minicab if you're not ready to leave the Christmas party

Despite being one of the first taxi companies to offer a mobile app in 2009, Addison Lee has been a follower, not a leader in developing new technology. This is something Boland is happy with, arguing that his firm can adapt to the market as it changes: “The TfL consultation into Uber confirmed the status quo. There are some things that we’re not doing now that we may choose to adopt.”

Addison Lee has been expanding its courier business, also an idea developed by Uber.

The businesses grew by 17 per cent in 2015, ferrying packages around London. The company now has 220 vans in London, and Boland expects that to double over the next couple of years: “We’re focused across the board on customer service, and if there’s something our customers want, we’ll provide it for them.