A New Domaine - An Interview With Michael Baum

Tara Loader Wilkinson
Tara writes about wealth, having written for titles including The Wall Street Journal, the BBC and the Financial Times, and is Editor-in-Chief at Billionaire. 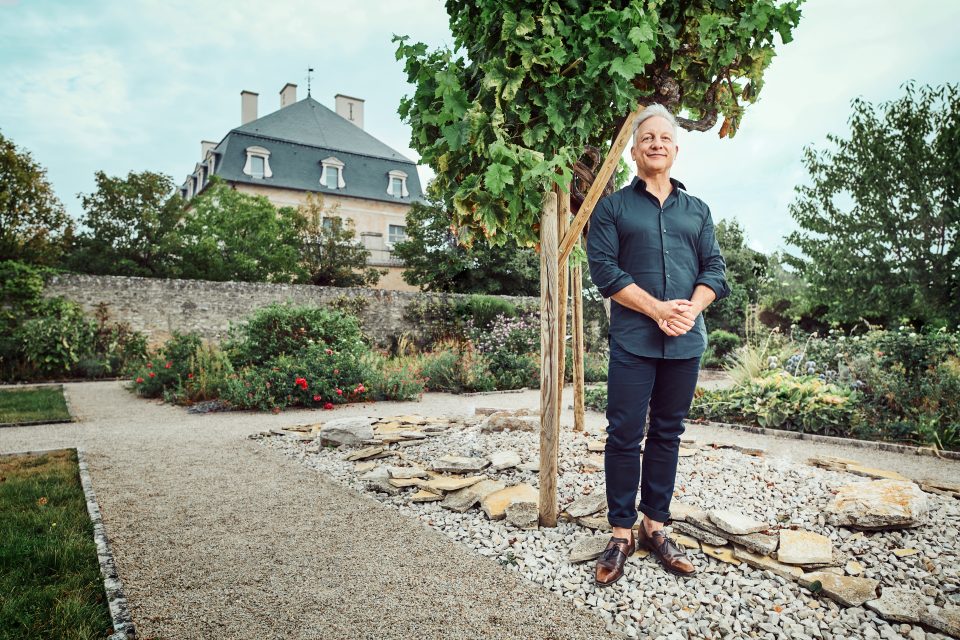 After the IPO of his billion-dollar ‘unicorn’, Splunk, Michael Baum spent two years working on the investor side, for Silicon Valley venture capital firms. But he found it all a bit repetitive.

“Every entrepreneur who walked through the door said: ‘I want you to help me create the next Splunk.’ But I thought, I’ve already climbed that mountain, I want to go climb a different mountain.”

Hence his recent career change. Baum went from billionaire innovator to – in his words – a farmer. As we talk over Zoom from his home in Burgundy, I note that with his immaculate silver flattop, daily morning yoga, a Tesla parked in his garage and a sartorial preference for black, he doesn’t resemble your average farmer. But Baum was never one to conform, as I’m about to find out.

In 2014 he became the first American to buy a wine estate in Burgundy, when he purchased Château de Pommard – a French winery established in 1726. It hasn’t been the most warmly welcoming neighbourhood, Baum admits. Burgundy has a reputation, as a wine region, for being inaccessible, complicated and highly traditional, which is perhaps why, when Baum bought the estate, it ruffled more than a few feathers.

When French newspaper Le Figaro ran the story on his acquisition, it garnered thousands of comments, many of them French citizens enraged by the idea that their heritage was being sold off to an American.

Nevertheless, Baum bought the iconic Château for a sum believed to be in the many millions, paid for by a fortune which culminated in the listing of Splunk on the Nasdaq Stock Exchange, in 2012.

His career trajectory was initially inspired by a talk he attended whilst at college studying electrical engineering. Steve Jobs visited his campus at Drexel University; soon after, everyone bought an Apple computer. Baum changed majors to computer science, and over the next two decades set up and sold six tech companies.

In 2003 he and two co-founders Rob Das and Erik Swan launched Splunk, which produces software to help firms monitor their data and security. With annual revenues last year of US$2.3 billion, up 31 percent year-on-year, its clients include 92 companies on the Fortune 100 list. He retired from the day-to–day running of the business in 2009, but remains a major shareholder.

Philadelphia-born Baum says he always loved wine but spurns the New World varieties from his homeland. In fact, as we speak, he has just returned from a research trip to the upcoming wine region Walla Walla, in Washington, where he found, “they’re all trying to imitate what we are doing in Burgundy.”

“Burgundy is the best place in the world for wine, period,” he continues. “And it is my style of wine, I was never into New World wine.”

But, initially at least, the acquisition of the some 20 hectares of vines was not about making money. “I don’t think anybody logically would get into the wine business from an investment standpoint,” he smiles. But after settling into his new domaine and getting under the skin of the industry, he hit upon a realisation.

“Wine-making is one of the most environmentally irresponsible industries in the world. Ironically, they are destroying the earth they depend on,” says Baum.

While it is common practice nowadays for consumers to interrogate the source of their food and buy organic, he points out that organic wine is still a niche commodity.

Perhaps consumers forget that wine is just as much an agricultural product as bread, but the majority of wine is industrially produced using synthetic fertilisers, pesticides and fungicides to increase productivity. In fact less than 3 percent of the world’s wine is farmed organically.

According to a report on Decanter.com, France’s vineyards cover 3 percent of agricultural land but account for a fifth of the country’s pesticide use. And France is far from alone on this. In a lab-test conducted in California which analysed wines from Napa, Sonoma and Mendocino counties, 100 percent of the samples were found to contain the glyphosate, the active ingredient in the herbicide Round-up.

Clearly, thought Baum, the industry was ripe for disruption. His first move was to turn Château de Pommard’s wine-making biodynamic, a century-old practice which uses organic farming methods (no artificial fertilizer or pesticide) as well as re-invigorating the soil according to an astrologically configured planting calendar. Then they moved to insist that any grapes from their negotiant business – where they buy grapes from producers and make their own wine with it – had to be organic. The upshot has been that it has driven some of their producers to go organic as a result. Others, they no longer work with.

But it wasn’t enough. “When you change consumer demand, only then will the wine industry will wake up,” he says. Baum’s technology mind whirred and he conceived a platform to connect consumers with winemakers to learn more about sustainable and responsible viticulture.

His latest technology start-up, VIVANT debuted in December 2020 to combine interaction, personalized education, and lively entertainment, transporting members to iconic wine regions from their homes. Through it he hopes to “crack the code” of making wine education fun. Annual membership costs US$     149 which gives you access to experiences ranging from a masterclass on the Rhone Valley to the essentials of food and wine pairings. Monthly membership will also be available.

VIVANT also offers organic and biodynamic wines for sale. “At some point we will have the world’s best book of responsibly-made wines,” he projects. There are some 150 wines on the platform, all of the big names including Malbec, Sauvignon Blanc, Pinot Noir, Cabernet Sauvignon and Chardonnay, priced from £20 to £200. His personal favourite is a Champagne by a house called De Sousa, described as “creamy bubbles with complex notes of brioche and honey.”

“Our market is anyone who is peripherally interested in wine but confused. Especially if they’ve had bad experiences with wine,” he says.

So far VIVANT has attracted a few thousand members, having focused on regions where tariffs and shipping rates on wine imports are low or non-existent including Singapore, Hong Kong, and Japan. Education and interactivity are the focus of the messaging, as well as the health implications, he says.

But now he is looking beyond organic growing, into the fields of regenerative agriculture and permaculture, which he says is “super-fascinating.”

“We need to look at the damage we’ve done to the planet and how we are going to fix that.” He references the original permaculture ethic of people care, earth care and fair share. “I wouldn’t say it is a religion, but it is a very advanced way of thinking holistically about systems. As a computer scientist, that interests me a lot,” he says. He likens it to the work he did in artificial intelligence in chaotic complex systems. It is levying his old expertise with new learning, something which, as a serial entrepreneur, he finds terribly exciting. “With      VIVANT I’m still squarely in the IT world while also being able to have a foot in agriculture life sciences.”

His goal is for at least 10 percent of the world’s wine to be farmed responsibly by 2030, up from less than 3 percent now. He believes much of this will come from Gen-Xers and Millennials taking a greater interest in how their wine is made. To this aim, he has created the 1% for Wine Program, wherein 1 percent of proceeds from the sales of his memberships, tasting kits and wines, go towards funding new ideas and research into sustainable wine-making, for example, plant-based alternatives to chemicals like Sulphur and Copper which are commonly used in wine-making.

Baum now splits his time fairly equally between San Francisco and Burgundy. In the US, he has various board memberships and is extremely hands on with his foundation, Founder.org, which has invested US$100,000 over the last ten years in 130 innovators from various universities across the US and Europe. Baum loves meeting young entrepreneurs who are applying technology to the world’s most challenging problems, funding and intensively working with them over a year, eventually leading Seed and Series A round investment in the most promising teams.

“I felt students with well-proven ideas were already getting funded by venture capitalists, but what about the students with crazy ideas, that would take too long or were too risky. If we could help them prove their ideas, rather than them going to work at a Google or a Samsung, we could create a lot more jobs,” he says.

Founder.org has supported companies including Konux, based in Munich, digitising high speed rail with smart sensors, and Poly6, is a Boston-based startup which turns citrus rind waste into plastic.

Now that the funds for Founder.org have been distributed he is looking at setting up ‘Founder.org 2.0,’ and selecting another group of promising innovators. This group will be smaller so he can spend more time mentoring them.

Baum believes that in both the wine industry and technology innovation, it is the next generation that will truly drive the change we need. He is delighted that his twin 20-year-old sons take an interest in responsible wine-making too; they and their peers, he hopes, will be the ones founding companies which benefit the planet, and spending better-informed dollars to drive change in irresponsible industries.