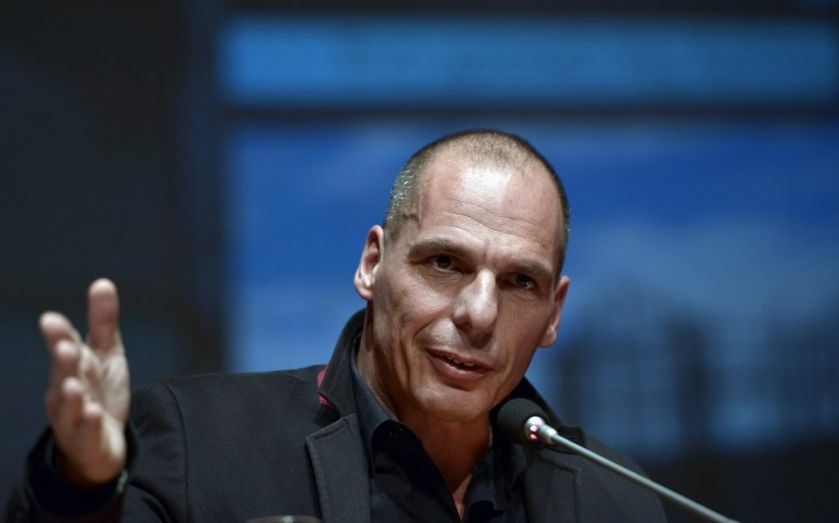 Greece's rock star economist Yanis Varoufakis has met with German finance minister Wolfgang Schaeuble to discuss the future of Greece and the Eurozone.

Varoufakis was under intense pressure today after the European Central Bank scrapped its acceptance of Greece's debt as collateral for fresh cash. In a press conference following their meeting, it soon became obvious that the gulf between the two countries was as wide as ever.

While recognising the suffering of ordinary Greeks, Schauble added that "the situation today is primarily caused by Greece's own problems". Schauble confirmed that there were still serious disagreements about how Greece should proceed to tackle its problems.

However, he extended an olive branch by praising the Greek government for reforming the tax system to make sure the wealthy "pay their fair share". Both finance ministers agreed a debt haircut was out of the question. Schauble said: "We went as far as we could go last time". Greece's finance minister rejected Schauble's claim that they "agreed to disagree". Rather, he said an agreement was "never on the cards" for this meeting.

Varoufakis said it was time to put an end his country's "gross indignity". In an attempt to calm fears abroad about Syriza's radicalism Varoufakis said his message to German people was that "you can expect a frenzy of reasonableness from Greece".

He warned that the EU needed to maintain strong rules, but elections needed to count. He told the German audience that the "serpent's egg" needed to be prevented from hatching. "When I return home tonight I will find a country where the third-largest party is not a neo-Nazi party, but a Nazi party", said Varoufakis.

When asked the awkward question of whether Greece was still party to the bailout programme or whether Syriza had the legitimacy to enact its campaign promises, Schauble said Syriza had the right so long as Greece didn't break its commitments.

Varoufakis argued his party didn't have the right to implement everything they promised, but they did have a mandate other Eurozone governments would have to take seriously.

Asked whether Greek government would abandon any of the current programmes, Varoufakis said: "We need to put loan repayments ahead of interest payments".

After today's press conference, Greece and Germany remain in a standoff. Varoufakis is hoping to get a deal on a bridging loan until May to make sure Greece doesn't run out of money.