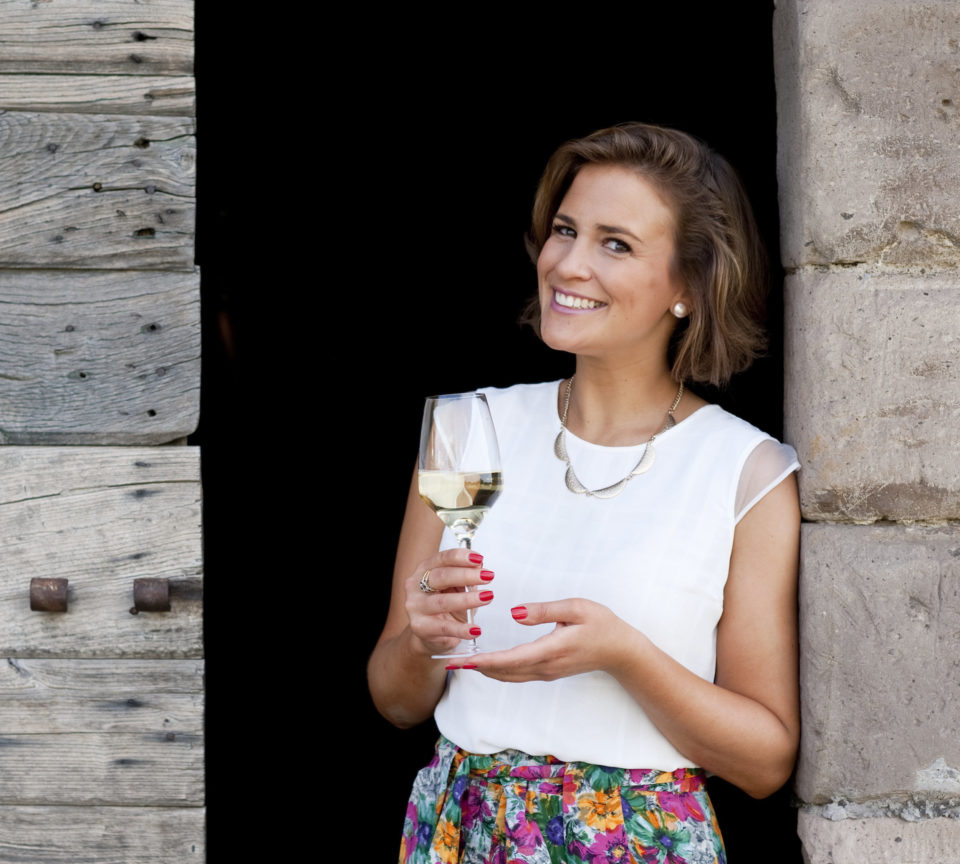 “I wasn’t going to start with this statement, but hey why not – I’m all about cross-dressing when it comes to wine,” says Amelia Singer, with a glint in her eye.

What she means is that wine is best served with life’s other great enhancers – like art, music, and food. That might sound obvious and even slightly pretentious, but stuffy is exactly what Singer is not.

This vivacious entrepreneur is not afraid to mix popular culture with the oft-regarded posh world of wine – a kind of cross-pollination of creative ideas. And most importantly, she makes it really fun.

Message in a bottle

Take an event in Los Angeles earlier this year when Singer was asked to interpret Kanye West’s music through Spanish wine. Most of us would probably balk at the prospect of curating something so utterly bonkers, but not Singer.

“People walked into this liberal, hippy-dippy art gallery in Laguna Beach and they didn’t know what the frick was going on,” she laughs.

She tells me that it was about making people think about the sound, the genre, even the texture of the music – and linking that to wine.

“This made me appreciate Kanye in a whole new way – I got into his music from a kind of cerebral perspective, as a producer.”

And that’s exactly the point: Singer wants wine to amplify art or conversation, and vice versa – like a couple who bring out the best in each other. So take classic literature, modern art, or opera, and she will link the wine to ideas, themes, and characters.

“Every night is so different; it’s a stimulating way to engage with wine and other industries. There’s all this talk about disruption, but rather than being scared of that, I think it’s awesome that all these barriers are breaking down, and there’s more room for collaboration.”

Singer’s business, called Amelia’s Wine, has four strings to its bow: she hosts private and corporate wine-tasting events, has writing gigs for the likes of Waitrose Magazine and the Wine Institute, is a consultant for bars and restaurants, and also makes regular appearances on TV – presenting programmes like the Wine Show.

This loquacious businesswoman might not take herself too seriously, but she’s certainly serious when it comes to learning about wine – she has various wine qualifications under her belt, and has even worked in vineyards to understand grapes from the roots up.

But while she ticks all the right boxes for being a sommelier, she’s set on subverting the fuddy-duddy connotations around wine-tasting.

Nowadays, city folk don’t just want to dine at a fancy restaurant – they want an experience, something kooky and memorable.

But while the concept of pop-ups and immersive dining experiences has mushroomed in the last few years, Singer still hosts one of the few wine-focused experiences in London.

Rather than the larger Kanye-style gig with over 100 people, Singer regularly hosts smaller private events, known as her Supper Clubs – where she made her name.

Guests essentially invite themselves to Singer’s home in Notting Hill, where she cooks for them (or nowadays works with a chef to curate canapes), and takes the group – usually between 18 to 25 people – on a wine-tasting journey. She’s pretty much the ultimate host for a dinner party.

She admits that it’s a bit like interactive theatre, and having dabbled in the dramatic arts when she was younger, this wine connoisseur is no stranger to performing.

“It’s like doing a play; you break down the fourth wall. Yes, some gags work and some won’t, but the Supper Club tends to draw in like-minded people who really think outside the box. Now I think experiences are becoming more important – particularly if you can learn and better yourself. I definitely think wine should help you see culture in a different way.”

I ask her how she sets the right tone at these types of events, and to my surprise she belts out a long note, making me chuckle as I look around to see if anyone in the bar notices.

“I’m a great believer in learning through entertainment, or what the Americans call ‘edutainment’. So that’s always the focus for me: you can never patronise or lecture – even when I’m working with people who are already wine experts, you have to make it fun. It’s about knowing the audience and getting out of yourself. Yes, I’m a conduit of wine, but it shouldn’t be about me.”

Bearing in mind Singer’s ambition to make wine accessible to the masses, it’s not surprising that she caught the attention of celebrity chef Jamie Oliver, who asked her to feature on his Drinks Tube channel.

“I really like how fun Jamie makes cooking; he makes people realise you can appreciate good food on a tight budget, and that there’s no excuse for eating badly.”

Singer even jokes about doing a Jamie Oliver by bringing good wine to schools – but actually, there might be something in that. Maybe not taking booze into the classroom per se, but encouraging Brits to enjoy small amounts of alcohol from a young age might stem our binge-drinking culture – a culture which is pretty much non-existent among our European cousins.And Singer agrees that alcohol is like a forbidden fruit in the UK and the US, creating an “all or nothing” mentality.

“We are quite funny, us Brits, because we didn’t have our own wine-growing culture until recently, so we didn’t really appreciate wine in the same way as other European countries.

“I spent a good part of my life growing up in California, and one of my earliest memories is having barbecues with my family – my dad had me tasting wine from the age of six, so he’s quite European in that way.”

Accessibility certainly feeds into what Singer is trying to achieve, and she points to the strict dichotomy around wine. “People either think of it as elitist, or they get really drunk on cheap bottles from the supermarket. But why can’t there be a middle way that makes wine fun?”