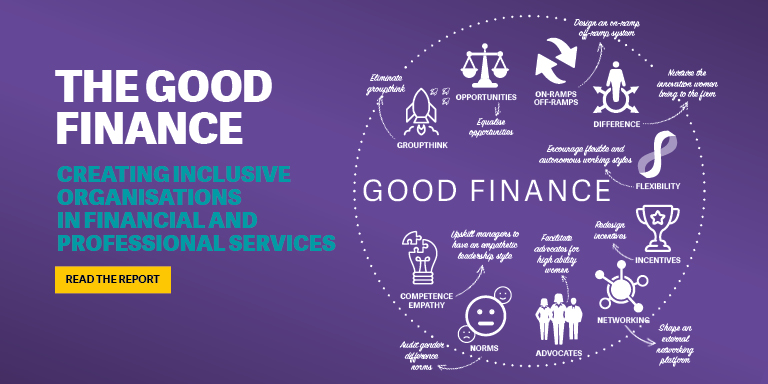 A new report published today by Women in Banking and Finance (view here) finds that women struggled if they did not perform consistently well compared to what they recognise as mediocre men in the City of London who are surviving in financial services in high numbers, for a number of different reasons which include social norms, retention bias, and a difficulty among women, especially black women to gain recognition on their performance at work.

A further striking finding of the research surrounds the tendency for managers to fake empathy when managing women, recognising that the trait was now very valuable.

The idea that women need to sink or swim, but men have many more opportunities to survive in financial services raises two problems for women. First, they are being held to higher standards – either ridiculed or celebrated, with fewer opportunities to drop the ball than men. Second, it was emphasised that below-average men often survived because they played ‘good politics’, bringing this ethos into their management approach as gatekeepers to opportunities for emerging talent. It was said that emerging women were less likely to get opportunities under these leaders, and often had their progression blocked.

To understand the headwinds and tailwinds that women experience when working in financial and professional services, the study undertook a listening tour speaking with 44 women at various stages in their career.

In this study, suggested actions for firms to take to reduce the headwinds relayed by the women are identified. Equally valuable is information on tailwinds and ways in which they can be replicated
or artificially constructed by firms to improve the growth and retention of women have been recommended.

This has clear merit given that the first year of the WIBF Accelerating Change Together Research Programme is focusing on the “Missing Middle”. Reducing headwinds and augmenting tailwinds can help retain talent in the industry at this key vulnerable point in a woman’s career.

Of the 44 women interviewed, 11 were Black women. Black women were strategically over-sampled given they are the group whose progression in the sector is notably slow and cannot be explained away. This study aimed to focus on women in financial and professional services. All 44 interviewees self-identified as a woman.

The interviewees only made cross-comparisons with colleagues that they identified as men, explaining occasions in this report when comparisons between only men and women were made.

Together, these women worked across all levels of seniority. The qualitative interviews were complemented with two roundtables with women in FO (17 participants) and CC (18 participants).

The study also leverages insight gained in the quantitative survey conducted by The Wisdom Council, on behalf of WIBF, in year one of the research programme (“the quantitative survey”). This study identifies the headwinds and tailwinds faced by women in the sector and led to the development of the GOOD FINANCE Framework.

The GOOD FINANCE Framework, if followed, can help move the sector through to its next gender convergence.

Embedded within the GOOD FINANCE framework is a set of actions that can be taken by firms to allow women to move forward in financial services. In doing so, WIBF hopes to inspire firms to try these actions in-house and continue a dialogue with us on their success.

To learn full details of how the GOOD FINANCE Framework was created, please read the full report.

We hope that you will embrace the GOOD FINANCE Framework whether you are a senior leader in your organisation, or right at the beginning of your career.

You can also read more about the ACT Research Programme on the WIBF website here.