It took me 30 years to get to Wales. I never had an aversion to it, it was just easier to get on a plane than it was to learn how to drive. As a lifelong Londoner with no family to visit regularly beyond the M25, there was no immediate reason to learn, so I had to wait until a friend was willing to trek over the Severn Bridge with me in tow.

In the end, it wasn’t the promise of the land of song that lured us, or even the ‘land of legends’ as the tourism board promotes, but the food. Ynyshir had recently been voted the fifth best restaurant in the UK – and the best restaurant in Wales – in the Good Food Guide 2018, while its Chef Patron Gareth Ward had snapped up Chef of the Year and retained its Michelin star for 2019. The trouble was, the country house in which it resides in the Dyfi Estuary is at least a four and a half hour drive from the Big Smoke. With assurances that there was a lot to see on the way, we embarked on a four-day road trip west that would prove a lot more rewarding than a bunch of leeks.

A stop off at The Pig in Somerset – a three and a half hour drive from our kick off point in London Fields – seemed a welcome respite along the way. Like so many country gastropubs, it models itself as ‘a restaurant with rooms’. One of five Pigs set in converted country houses, there’s simply no way of not comparing it to a rural Soho House. The group was founded by Robin Huston, who trained at the Savoy before chairing the Soho House Group, and its head chef James Golding comes from Soho House New York.

The similarity is mainly in the aesthetic; wildflowers crawl wantonly over its entrance, its 29 rooms were dominated by velvet armchairs, four poster beds and free-standing tubs, and a stroll around the grounds is a tour of antiquated English past-times, from croquet to boules to the kitchen garden that contains 13 different varieties of mint. Three gardeners are employed full time to look after these, but they also have to contend with the chickens, two beehives and a sow called Lola. Guests can roam around it all at their will, but the thing that really sets The Pig apart from its members club peers is the food. 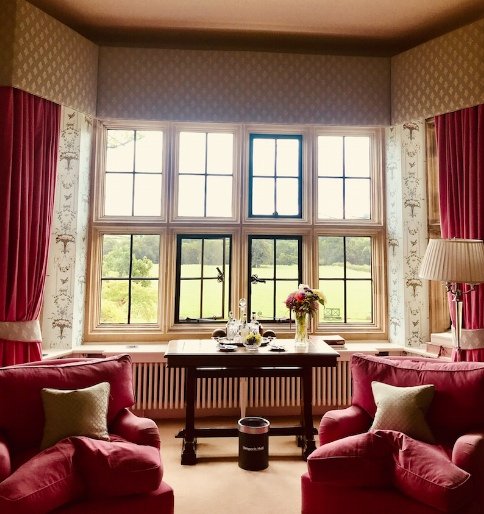 It also doesn’t have much of a spa offering – there’s a sort of potting shed if you want a massage – but it does have an excellent restaurant in a fairy lit conservatory that sources all of its ingredients within a 25 mile radius (apart from the fish, of course). The Pig was so named because Huston and his wife Judy wanted it to sound like you were popping down your local. It seems to have worked as most of its clientele comes from the surrounding villages. The menu is divided into ‘Piggy Bits’ (a bit twee but boasts lengths of skinny, crispy crackling as long as school rulers), ‘Mendips’, mains named after the nearby hills, and ‘Garden Bits’, which were the undisputed winners (the oyster mushroom raviolo is unmissable). Judy, who has filled the remaining space with eclectic art and antiques; the front desk is surveyed by a menagerie of stuffed butterflies that are at once fascinating and slightly grotesque.

Arguably our favourite pitstop awaited us another three and a half hours away over the border in the Welsh port town of Aberaeron in a Grade II Listed harbourmaster’s house-turned-five-star hotel that’s painted an eye-searing azure blue. At first glance, Harbourmaster’s a bustling cafe serving up a hearty Welsh breakfast and cups of milky tea. Don’t be fooled, though, as it’s one of the best spots for fresh shellfish outside of Cornwall. Happy hour casts off cocktails for oysters, sold for £1.50 a piece, while the menu digs up entire crabs for your delectation and bowls filled with deep-fried cockles and homemade sweet chilli dip.

Seagulls caw around the attic rooms – the sort that feel cramped now but were the height of cool in your teenage years – but the situation was perfect for wandering. Adventure along the Wales Coastal Path to clamber over dramatic cliff faces and lark about in brambled caves. Occasionally you’ll come across a small child, crabbing with a plastic bucket, or a chapel where the verger will be waiting with their entire life story, but other than that it’s a peaceful way to work off the school of fish you ate the night before. Regain your holiday podge at Hive, a harbourside restaurant that’s fine, but it’s the honey ice cream sold from the van outside that people from miles around for.

After you’ve perused Aberaeron’s bric-a-brac and second-hand bookshops, it’s time to move on to the main event. Set in the Rhondda Valley, Ynyshir is a breathtaking hour’s drive away, past Aberystwyth and onto the edge of Snowdonia National Park. Chef Gareth Ward landed this dream gig in 2013 – the restaurant is set in 11 acres of ground and gives him complete culinary freedom – and has turned it into one of the most sought-after dining experiences in the country. Surrounded by couples celebrating anniversaries and friends on weekends away, the excitement was palpable. Its motto is ‘Ingredient-led, flavour-driven, fat-fuelled, meat-obsessed.’

Animal hides cover its chairs, the silver and black bedrooms are almost aggressively masculine and gather around a firepit in the grounds to sip aperitifs. Containing only nine rooms and two tasting menus – one for dinner and another for breakfast – it’s the sort of place you stay for one night only (Ward tells me they are thinking of only allowing overnight bookings). 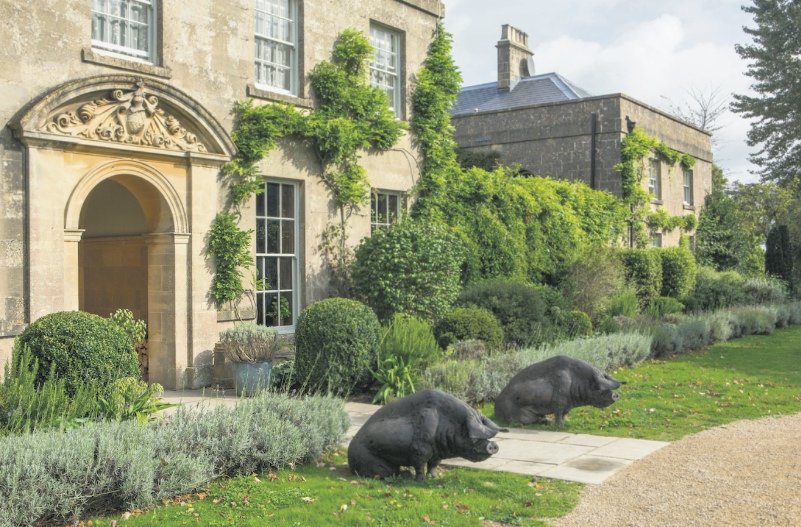 Two pig statues guard the entrance to The Pig

Young tattooed chefs sang along to Kings of Leon while they served up endless courses of canape-sized, Japanese-influenced morsels. Miso-butter, dashi and pickles presided over Welsh-sourced wasabi and wagyu beef. Some dishes felt like a salty smack in the chops, but the most effective were clever reincarnations of classics, from the Not-So-French-Soup to the wagyu fudge. Breakfast is served at 9am, but it’s worth getting up for. The same team from the night before serve the most delicate fry up in primal stoneware alongside dainty French palmiers.

The last leg was spent at Llangoed Hall, an hour and a half’s drive into the Brecon Beacons. Even though the Green Man Festival was in full swing, we felt this traditional country house hotel was exactly where we wanted to end up after such a long time gastropubbing. Bought by Sir Bernard Ashley in 1987, all of the bedrooms are individually designed, but mine was the only one decked out with the original Laura Ashley wallpaper (a framed sign told me so).

The food was modern European, and refined, but the afternoon tea – with warm Welsh cakes rather than scones, naturally – was an archetypal delight. It was a gentle end to a perfect road trip, and an unforgettable way to eat our way into Wales and back over the border again.

Ynyshir from £430 for dinner, bed and breakfast based on two people sharing; ynyshir.co.uk

Harbourmaster from £120 per night B&B per room; harbour-master.com

The Pig near Bath from £180 per night; thepighotel.com