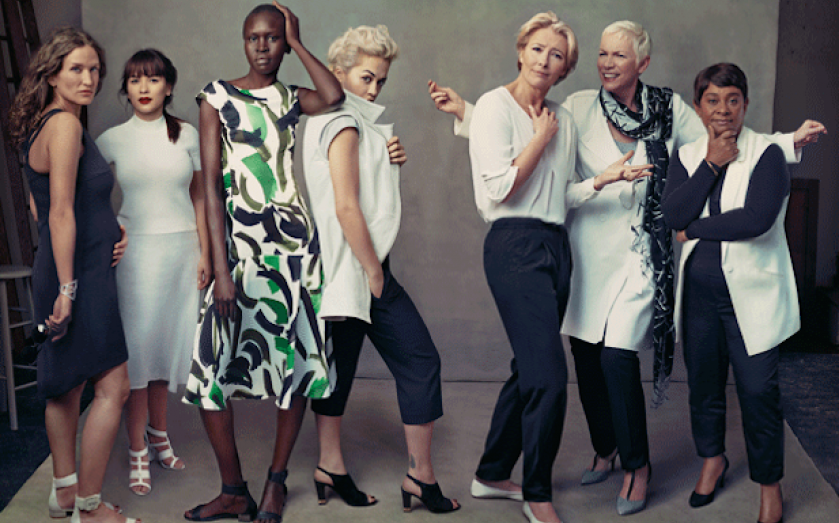 It’s a great shot, there’s some pouts, some pointing from Thompson, some dancing from Lennox, some mild hiding from Ora and some head holding from Wek. All so kinetic and natural with what could be an Instagram Nashville filter to warm it up. It’s not just a line-up of inspiring women, it’s an M&S line-up of inspiring women.
Will it be enough to persuade the nation’s women to start wearing its garms again? Heaven knows. But we have noticed a pattern emerging in the brand’s choice of leading lady. The last time it revealed a line-up was August. Again, there was a much-loved British actress of a certain age (Helen Mirren), a young British popstrell (Ellie Goulding), a striking model (Karen Elson), fashion doyen (Grace Coddington) and a campaigner (Katie Piper) – all choices mirrored in this round’s selection.

We thought M&S could take a breather and we could take over for next season’s choices. For example we’d like to put actress Judi Dench forward, singer Paloma Faith and why not get Bradley Cooper’s squeeze Suki Waterhouse in as the token model?
Scrap that, we’ve got an even better idea. Why not get the City’s leading ladies in there? With the Cranfield Female FTSE Board report coming out on Wednesday – perhaps M&S should scour the list of women currently making waves in the City for its next inspiring list?
We’d like to nominate Newton Investment chief exec Helena Morrissey, Lord Mayor of the City of London Fiona Woolf, Severn Trent’s chief exec Liv Garfield, easyJet’s Carolyn McCall, finnCap’s CEO Sam Smith and Santander’s Ana Botin. Now that’s a line-up.