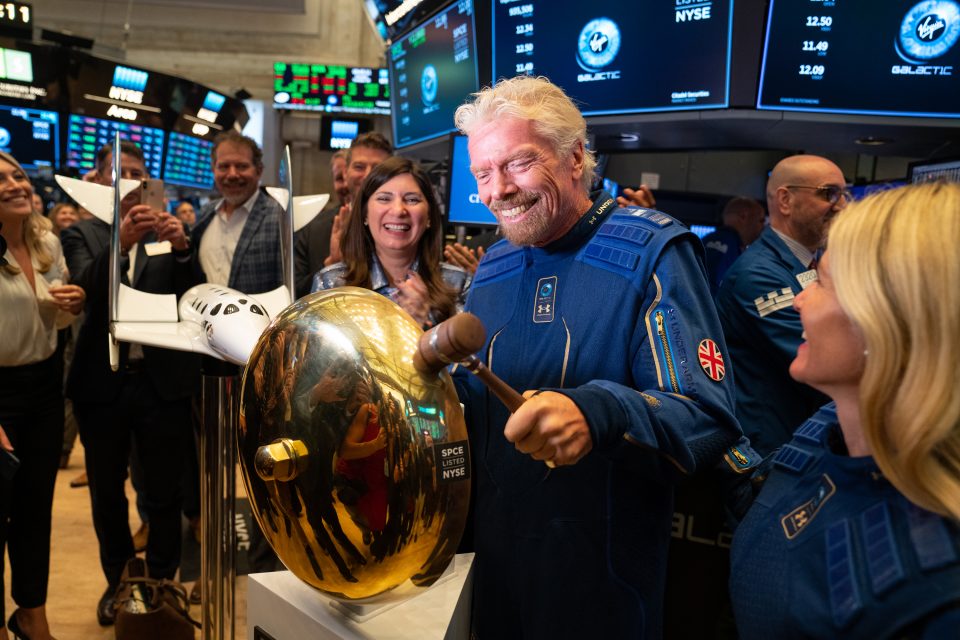 Sir Richard Branson’s space tourism venture, Virgin Galactic, has taken off on the New York Stock Exchange this afternoon, with shares soaring more than eight per cent in early trading.

The company completed a merger with a US investment vehicle late on Friday, making it the first commercial space venture to go public. Branson, who has a 40 per cent stake in the firm, flew to New York to ring the bell himself, in what he told City A.M. was an “incredibly exciting” prospect last week.

The company’s public debut is a pivotal moment for the 69-year-old entrepreneur’s hopes of selling tickets to send rich people into space. He has thus far sold tickets to 603 customers, including pop star Justin Beiber and actor Leonardo DiCaprio, for around $250,000 each, however he admitted last week that getting to this stage had been no walk in the park.

“It almost bankrupted the Virgin Group,” he joked at an event in Israel on Thursday. “We’ve spent a lot of money on Virgin Galactic and [sister venture] Virgin Orbit.”

“It will be good to actually involve the public and so my chairman will still talk to me.”

“For the first time, anyone will have the opportunity to invest in a human spaceflight company that is transforming the market.”

Senior figures at Virgin had expected shares to be stable on Monday because the investment vehicle, called Social Capital Hedosophia, has been trading on US markets since 2017, and traders have known about the deal since summer this year.

Read more on this:

CMC Markets analyst Michael Hewson said the purpose of the listing was “to buy into a dream”.

“Whatever you think about Richard Branson, his brands have a certain cachet. So just for that reason alone, people are probably buying into the brand more than anything else.”

The commercial space race is heating up as Virgin Galactic competes with rivals such as Blue Origin, backed by Amazon’s Jeff Bezos, and Elon Musk’s Space X.

Branson even raised the possibility of a lunar hotel as the next step. Instead of focusing on humans inhabiting Mars – an idea floated by Bezos – Branson’s vision suggests a possible tourist industry.

“We’re looking at creating something like a Virgin Hotel in space,” he told City A.M. last week.

“It may develop into that [colonising Mars]. But I think that we feel a hotel in space would be better – maybe just on the Moon – than actually colonising.”