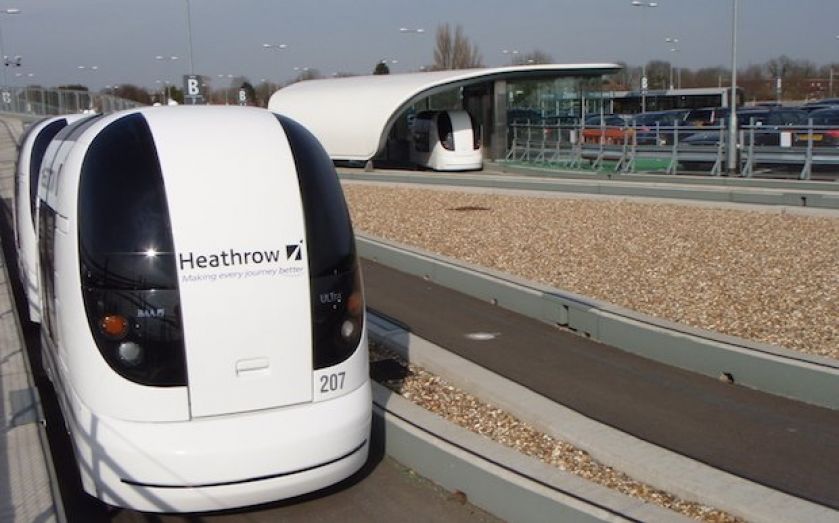 Driverless vehicles are either the future of motoring or the death knell for public transport, depending on whether you take your travel news from Google or the RMT.

But tucked away beyond domestic arrivals at Heathrow is a driverless transport network that has been running successfully for nearly three years and is the first of its kind in the world, with ambitions to be one of Britain’s biggest exports in the industry.

Heathrow PRT – it stands for personal rapid transport, although the network is more often referred to as “the pods” – carries passengers between terminal five and the business car parks on an elevated track around 3.8km long.

The 21 battery-powered pods, which look like a cross between a lift and a bumper car, carry up to five people plus suitcases and can reach a top speed of 25 miles an hour.

They navigate the turns and climbs around the airport using laser sensors to detect the distance from the kerb.

The automated driving programme has never crashed a pod. Created by a team at Bristol University and launched at Heathrow in 2011, the pods are run by Ultra Global PRT and have taken almost 1m passengers plus an estimated 70,000 transfer bus journeys off the roads.

Marriott recently paid to advertise on the vehicles and Heathrow is in talks to bring in more sponsors.

However, Heathrow has nixed plans for a second network at its new terminal two following a spending settlement with the airport regulator at the start of the year. Ultra Global PRT nevertheless aims to export the concept around the world.

UK Trade & Investment took a delegation from Taiwan’s railways to see the system last week, and cities from Amritsar in India to Florianopolis in Brazil have their eye on the technology, which the firm says is cheaper to set up than a railway and uses far less power. The current pods could handle distances of up to 10km, or more with better batteries.

Ultra PRT, run by Fraser Brown, also has ambitions closer to home. TfL is considering installing pods to assist the DLR and mainline trains around the Olympic Park as it transforms into a business and residential hub.

TfL says the total cost of such a scheme ranges from £70m to £105m, or less if used in tandem with a DLR extension. A private contributor would probably be needed.

And a transfer between Birmingham stations using PRT could be “drastically better” than buses when it comes to linking up the HS2 terminus, says Brown.