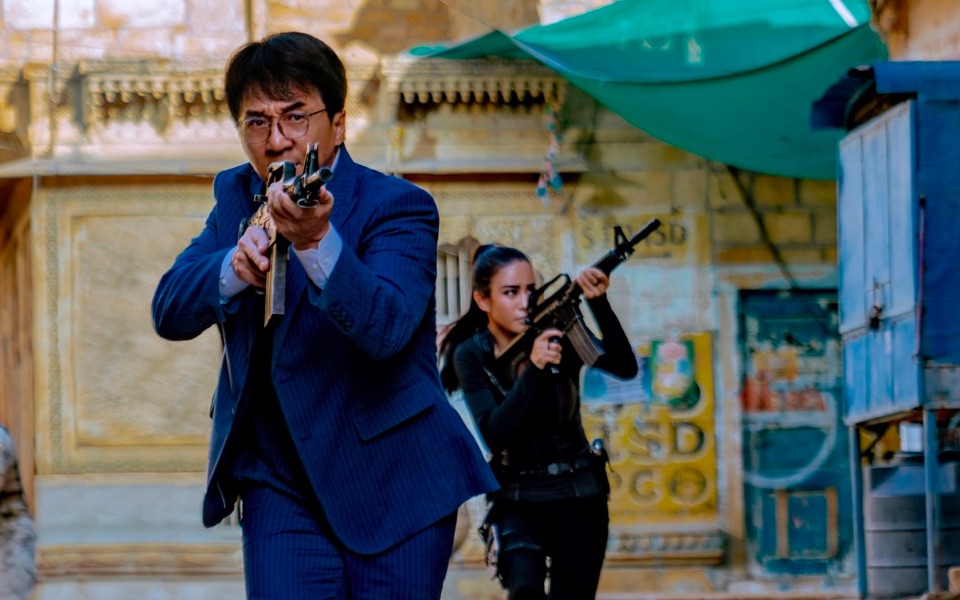 The current climate is exactly the right moment for a classic action movie, a genre that can provide us with escapism and some vicarious victories at a time when so much seems out of our control. Vanguard would seem to fit the bill – legend Jackie Chan reunites with Stanley Tong, his collaborator on two Police Story movies as well as 1995’s Rumble In The Bronx, to deliver a large scale modern action film.

Sadly, not everything comes together. Chan’s character Tang Huanting is the leader of Vanguard, a Chinese organisation tasked with protecting accountant Qin (Jackson Lou) who is being chased by a Middle Eastern terrorist group named Brothers of Vengeance. While they save Qin during an exciting opening sequence in London, the Brothers of Vengeance manage to kidnap his daughter activist daughter Fareeda (Xu Ruohan) along with a member of Vanguard’s team. Tang Huanting and his team must travel across the globe to retrieve the hostages, and prevent the terrorists from obtaining funds that will put the world in danger.

At 66 years old, no one is expecting Chan to perform the kind of feats that led him to reinvent the action genre decades ago. However, the old magic is still there as the veteran keeps up with much younger co-stars in a film that resembles one long continuous action scene. Much of it is very entertaining: it sets the bar high with a tense rescue in London’s Chinatown district, before throwing outlandish elements at us like bee drones and jet skis. A scene where Chan faces off against a wobbly CGI lion is baffling, but in this Bond-meets-Thunderbirds world it makes sense.

Yang Yang is perfectly likeable as Vanguard agent Lei, the younger lead in the film who strikes up a bond with Fareeda when the pair are held captive. He has his moments, but this film is very aware that Chan is who we all came to see.

This would be the perfect platform for a tongue-in-cheek tone, that allows the audience to have fun. Sadly, in the moments where people aren’t being kicked or chased, the clunky dialogue is delivered with too much sincerity. Worse still, there seems to be a nationalist agenda behind most dramatic scenes. It appears that Vanguard are not only protectors but moral judges, furrowing their brows as they profile the stereotypical Middle Eastern villains, saying they will “do anything for money”.

Fareeda is deemed worthy of saving due to her work exposing poachers in Africa, while a stern Tang Huanting refuses to even shake hands with disgraced accountant Qin, reminding him that “greed is the root of all evil”. It’s no different to numerous flag waving American action films, but the moral rhetoric is delivered so bluntly that it may as well be a government address.

Fast-moving and crammed with fight scenes, Vanguard is a disposable action flick that will satisfy the most loyal Jackie Chan devotees. However, those looking for the actor at his best may want to visit some earlier hits.

Vanguard is available On Demand from 8th January