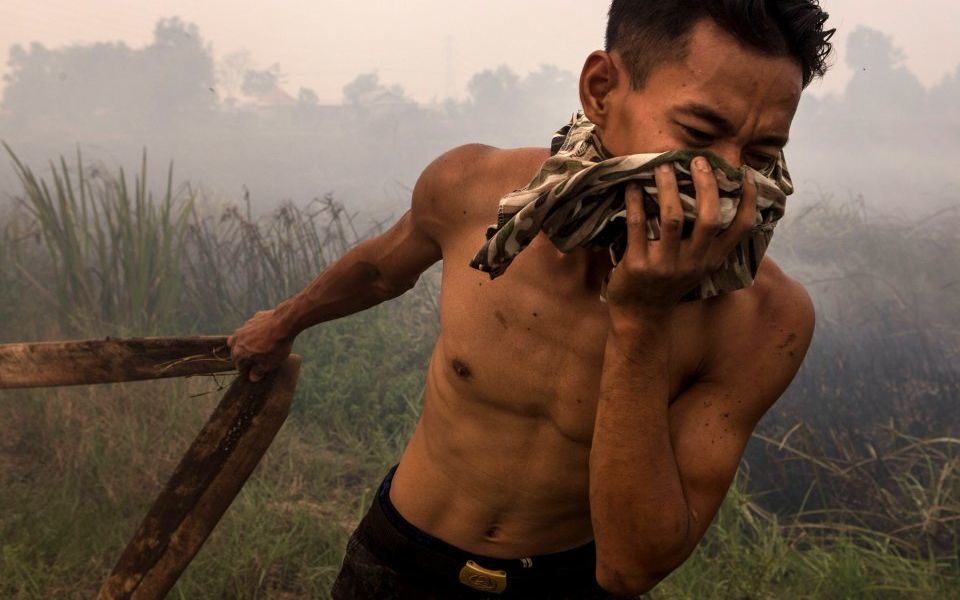 Palm oil is an inexpensive and highly versatile vegetable oil derived from the fruit of the oil palm tree. It can be found in half of all consumer goods in Western grocery stores, from chocolate, ice cream, and baked goods to soaps, lotions, and detergents.

Not only is palm oil is the highest-yielding vegetable oil crop but it’s also the most actively traded vegetable oil in the world. As a petroleum alternative, it can power vehicles, heat homes, and manufacture plastic.

And with annual sales of around $50 billion, palm oil is also a big business, albeit one with oversized risks.

Over the past 15 years, palm oil plantations in Indonesia and Malaysia have expanded, tripling their production. The two countries now produce around 85 percent of the global supply. Oil palm concessions lease more than 10 per cent of Indonesia’s total land area.

After falling 4.8 per cent in 2015–2016, the first decline in 18 years, due to El Niño and related climate change effects, global palm oil production is expected to increase by 7.3 per cent, to 63 million tons, in 2016–2017, according to FitchGroup’s BMI Research forecasts.

As palm oil production grows, so does risk

The expansion in palm oil production has come with considerable costs, and analysts need to consider the environmental, social, and governance (ESG) impacts. Most analysts have no background in natural resource science, so are unfamiliar with ecology functions or how the holistic ecological strength of plantation assets are key revenue drivers.

Slave and child labour are often part of the palm oil supply chain. Additionally, to make way for plantations, companies frequently come into conflict with local and indigenous communities. In 2012, 59 per cent of Indonesia’s roughly 1,000 palm oil firms were involved in land disputes.

It has wreaked havoc on other aspects of life in palm growing regions, as well. The 2015 fires in Southeast Asia are blamed in part on oil palm cultivation. These fires and the resulting haze may have contributed to 100,000 fatalities in Indonesia, Malaysia, and Singapore, according to estimates from Harvard and Columbia universities. The economic toll of the fires exceeded $16 billion — more than double the recovery costs of the 2004 Indian Ocean tsunami and equivalent to 1.8 per cent of Indonesia’s gross domestic product (GDP) — according to World Bank calculations.

Palm oil is the leading cause of deforestation in Indonesia and a major reason why the country is the sixth-highest in greenhouse gas emissions in the world. Clearing forests for palm oil production has also pushed Bornean orangutans and Sumatran elephants and tigers, among other species, to the brink of extinction.

How interconnected is the palm oil industry?

Given the critical human and environmental risks posed by palm oil, how can we better understand the macro-level structure and governance of the palm oil industry?

In particular, is the sector a collection of independent companies with little connection to one another? Or is it a highly interdependent and interconnected web of firms that share officers, board members, and investors?

To answer these questions, we gathered information from public sources as well as from Bloomberg and other financial databases. Using this data, we wrote a set of PERL scripts to construct network diagrams of officers, board members, and shareholders. We then visualised these networks with open-source Gephi software to create a set of interactive charts.

From a simple spreadsheet listing each Southeast Asian palm oil and agriculture company and their senior executives, we constructed a graphic that visualised overlapping executive roles, related governance risks associated with overboarding, and investor positions.

By demonstrating what’s possible with public information and advanced visualisation tools, we hope to encourage a new way of thinking about how industries with these sorts of challenges can be understood and investigated.

The most common relationships we found among the companies are board interlocks. The figure below shows the board members of each company. You can click on the image to open an interactive visualisation in your browser and zoom into any portion of the network to see more detailed information. Clicking on any node reveals the other companies and board members it connects to. All information is current as of Q2 2016.

To map the macro-level structure of the network, we applied a technique called ‘community finding’. Board members, executives, and companies that are more closely connected than the rest of the network share the same randomly assigned colour. In addition, we used Google’s PageRank to determine the relative ‘importance’ of each node to the specific network. The larger the node, the more ‘important’ it is.

Data is derived from publicly available sources as of Q2 2016 and may contain errors.

We employed the same approach to map the major shareholder connections (view interactive version) in the palm oil sector.

As with the board interlocks visualisation, groups of investors and companies that are more connected than the rest of the network have the same randomly assigned colour, and node size is based on the node’s relative ‘importance’ as determined by Google PageRank. The thickness of the line between a shareholder and a company is a function of the percentage of the company’s outstanding shares owned by that shareholder. The thicker the lines, the greater the ownership.

Data derived from publicly available sources as of Q2 2016 and may contain errors.

One key finding, from the upper right quadrant of the visualisation: Wilmar International (green) and Jardine Matheson (blue) each have a cluster of investors who only own shares in one of the companies, a cluster of shareholders who invest in both but not others, and then an array of investors who invest in one or both as well as other companies.

Using the interactive visualisation, you can click on any company to see its investors as of Q2 2016. You can also search for a specific shareholder or company by name to filter the network since such macro-level trends as overboarded executives or interlocking boards are not so easily discerned by a manual, company-by-company analysis.

Please note, this is a pilot project based on publicly available information, so some data may not be accurate.

You can read more insights into the investment industry, risks and ethical decision making on the CFA Institute blogs at blogs.cfainstitute.org.

Dr. Kalev Hannes Leetaru founded and leads the GDELT Project, a real-time open data index over global human society, inventorying the world’s events, emotions and narratives as they happen. He is a Senior Fellow at the RealClearFoundation and a Senior Fellow at the George Washington University Center for Cyber & Homeland Security, where he is also a member of its Counterterrorism and Intelligence Task Force. From 2013-2014 Leetaru was the Yahoo! Fellow in Residence of International Values, Communications Technology & the Global Internet at Georgetown University's Edmund A. Walsh School of Foreign Service, where he was also an Adjunct Assistant Professor, as well as a Council Member of the World Economic Forum's Global Agenda Council on the Future of Government. In 2011, the Economist selected his Culturomics 2.0 study as one of just five science discoveries deemed the most significant developments of 2011.