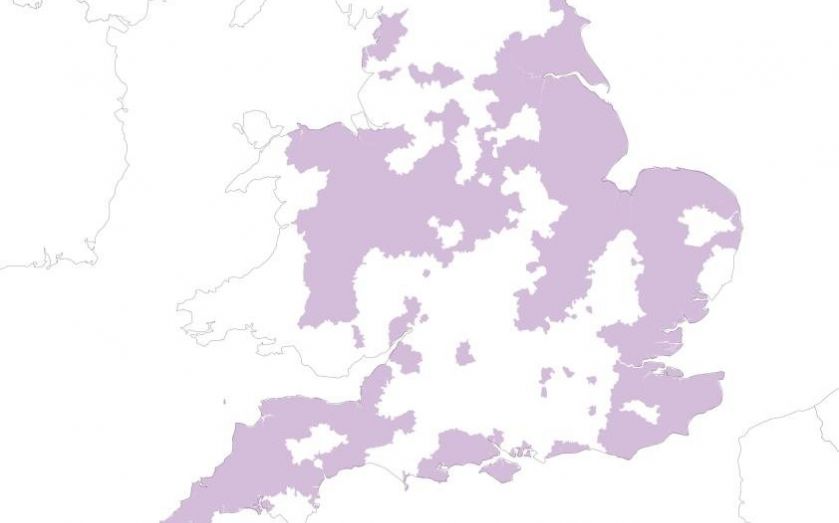 On Monday, defence secretary Michael Fallon aired what he believed to be some of the public's concerns around immigration.

Speaking on Sky News' Murnghan programme, Fallon said some towns on the east coast of England feel they are "under siege" and "swamped" by migrants.

That phrasing failed to impress Downing Street, which was quick to distance itself from the remarks. Even Ukip's migration spokesman called Fallon "excessive" and Tim Aker, head of Ukip's policy unit, said Fallon "should know better".

The minister was responding to Angela Merkel's dismissal of suggestions there could be a fundamental change to freedom of movement within the EU. David Cameron has said reforming free movement will be a "red line" in future negotiations on Britain's EU membership.

The Tories have also toughened up their rhetoric around immigration to counter the threat from Ukip.

While Fallon has said he "misspoke", it is undeniably the case voters have become ever-more concerned over migration, with numerous polls showing it to be one of the top two most important issues to the electorate.

Furthermore, British attitudes towards immigration are overwhelmingly negative, with 77 per cent of voters wanting cuts to immigration, and 56 per cent wanting it cut by a lot.

When people are asked why we should cut down on immigration, more than a third said there are "too many people in the country", or that the "country is not big enough – overcrowded".

Leaving aside the fact only 10 per cent of the UK's land mass is built on, and just five per cent is under concrete, is it true coastal towns in England, where Ukip is thriving, are overflowing with waves of migrant workers?

Far from legions of eastern Europeans working the piers, data from the Office for National Statistics shows England's coastal towns are some of the least diverse in the country.

Maps made using ONS data for demographics and Electoral Commission data for UKIP’s performance in the May 2014 European parliament elections. 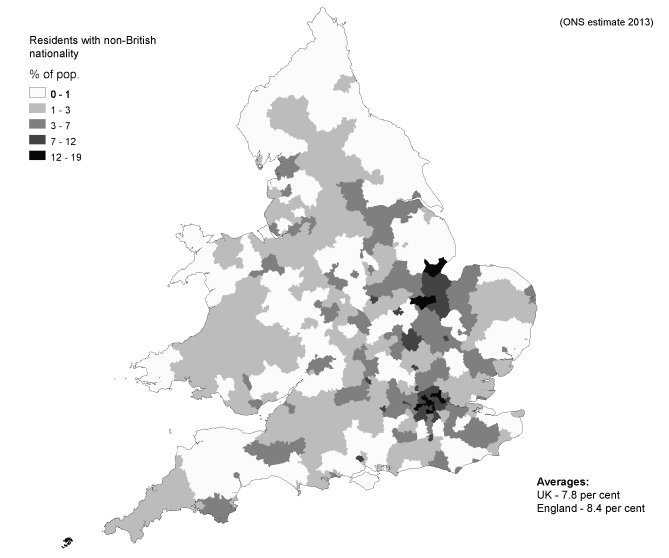 Ukip's first elected MP, Douglas Carswell, represents the coastal seat of Clacton, where residents with a non-British nationality make up between one and three per cent of the population.

The same is true in other areas where Ukip has surged, such as in Heywood and Middleton, where its share of the vote soared 36 percentage points, and Rochester and Strood, where Tory defector Mark Reckless is on the cusp of returning to Westminster as a Ukip MP.

The results are similar across England and Wales, with Ukip's key messages on Europe and immigration hitting hardest in the areas with the fewest immigrants. To explain this apparent paradox, we can turn to Oxford's Migration Observatory to provide some possible answers.

According to a report released in July analysing, among other things, people's attitudes towards different types of immigrants, those living in one's own neighbourhood were the most popular.

Even though most Brits view immigration as harmful, few believed this  to be true of migrants living in their community. Back in 2007 a poll for the Sun found just 15 per cent of people thought immigrants were causing problems in their area, and 69 per cent said they did not have a strong local impact.

Furthermore, the 2008-09 Citizenship survey found 85 per cent reported that in their local area people from a diverse range of backgrounds got along well.

In London, where immigration is most heavily concentrated, 54 per cent said immigrants were positive for the economy, against 28 per cent elsewhere in Britain. It is reasonable to suggest if an area is more diverse it is likely to be more accepting of immigration.

However, many economic myths still surround the immigration debate and could be influencing people's attitudes. A poll by Ipsos Mori found 31 per cent of people believed immigrants were a drain on public services. There is little evidence to support this claim, with some estimates showing immigrants contribute 35 per cent more in taxes than they take out in benefits.

Ukip's ceaseless demands to cut down on immigration manifested itself in the policy of a 50,000 a year quota under an Australian-style points system at the party's conference in September. The announcement elicited a sharp response, with Simon Walker, director general of the Institute of Directors, commenting: