A FIFTH of Britons now suspect that they will never earn enough money to retire, more than in the US, Canada or Australia, according to a report released today by HSBC.

With a squeeze in wages and inadequate savings for retirement, the UK performs poorly in terms of what people expect from life after work. HSBC surveyed 16,000 people in fifteen countries, including over a thousand in the UK.

A full 19 per cent of people who are not yet retired believe that they will never earn enough money to stop paid employment entirely. Even of those who are already retired, 39 per cent claim that they did not prepare enough or at all for a comfortable retirement while they were working.

UK residents also reported to the survey that they have far fewer years worth of income saved up to keep them going in retirement than people who live in other countries.

The country also tops the table for the number of people who are likely to live alone after they finish working: 36 per cent of people who are divorced or separated predict that they will work indefinitely, in comparison to only a fifth worldwide. 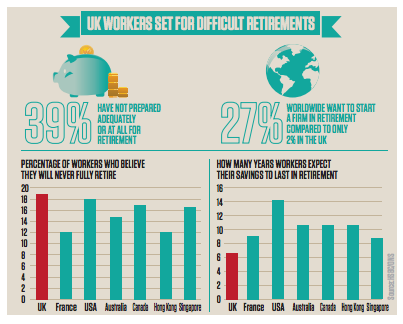 Malcolm Small, a senior policy adviser for the Institute of Directors (IoD) said that inadequate pension arrangements were part of the problem, suggesting the UK is facing a “looming retirement income crisis”.

He added: “The sort of savings we’re seeing going into defined contributions just aren’t enough. A total contribution of eight per cent will not be enough for people to have a comfortable retirement. Until pension auto-enrolment kicked in, only a third of employees in the private sector were saving at all.”

Small suggested that the UK has a system that neither provides generous state support, like France or Germany, nor guaranteed compulsory saving by employers like Australia.