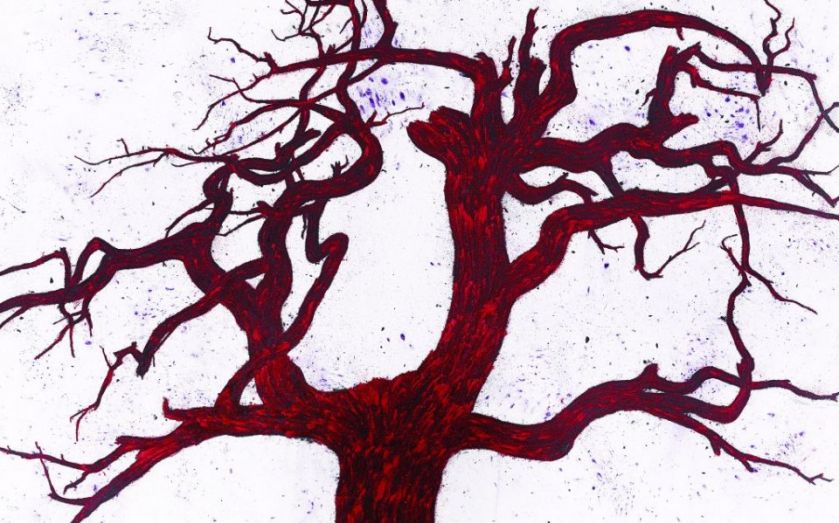 Painter Tony Bevan speaks ahead of his show at Ben Brown Fine Arts.
Tony Bevan established a name for himself with blood-coloured self-portraits that snarled and gurned and twisted into the white of the canvas. Meeting him today, you’d be forgiven for asking, where are the devilish flared nostrils, the vast egg cranium mapped with veins? A slight man of sixty-odd with a winning smile and soft northern lilt, it’s immediately clear Bevan isn’t as interested in achieving a physical likeness as he is in capturing the space inside the head. Bevan paints faces but his muse is the mind.
Many metaphors have been employed to aid humans’ understanding of the brain: a muscle that has to be trained, a filing cabinet to be filled, a camera, a lens, a prism. In his latest exhibition, Bevan Focuses on two: the tree and the archive. With branches emerging from a trunk, curling back, tangling, growing, the former can be linked to the human nervous system. The latter, a vast expanse of neatly filed information waiting to be sifted and perused, has obvious connections with memory. The trees he paints are “isolated, like a human. I like the trunk, how it expands beyond and grasps. [The branches] are almost like elbows crossing. They’re very human-like forms and that’s what interests me, creating these spaces… in these tendon-like colours.” 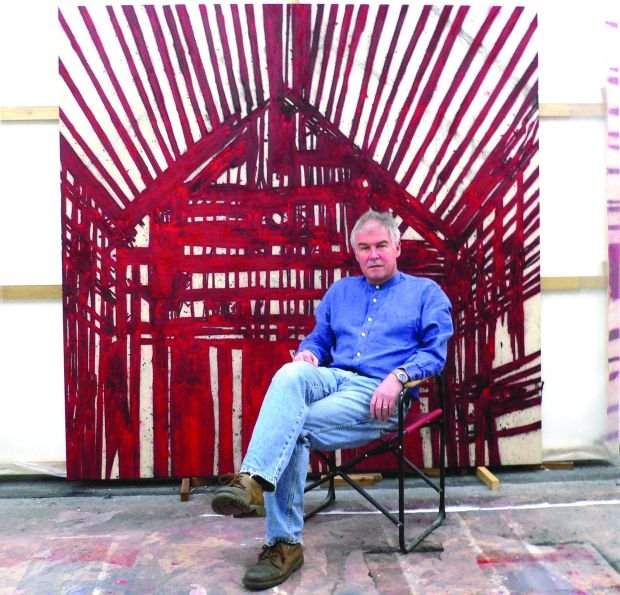 And the archives? “The archives are more recent. What interested me about them was they became almost like an alphabet,” he says, gesturing to the sloped files inside the grid. “Almost like a language.” And what information, if any, do these archived documents hold? Not knowing is what gives the painting  its enigmatic power: “whether its political, military, sexual or whatever – you have no idea whether [the information] is inert or vital.”
The paintings themselves are anything but inert. You have to get up close, see the scabs and blisters, the way the crimson trees smear and smudge. Photographs barely do justice to the richness of the colours. Ox-blood, rusted steel, violet – all are mixed by Bevan himself. “I grind my own pigments in acrylic. That came about many years ago when I was a student we used to make our own etching inks. You never realise there are different blacks until you make your own. Some might be charcoal, some might be burnt bone. All are different.”
Burnt bone. It sounds like something you’d find lying at the foot of one Bevan’s trees if he ever turned his gaze away from the branches and towards the root. Why does he favour such rich tones? “I wanted the tendon-like rawness. All my work has a very physical and raw nature…. all this charcoal, I like the way it moves and shatters. The debris gets fixed there so the process of the making shows up in the final work. [The archive paintings] have been painted with brushes in which a lot of the bristles have been taken off. So it’s almost like a kind of gouge into the surface.”

Bevan thinks the speckled surface looks similar to the night sky, but I think they look more like the blemishes you see on old film, the jittery flickers of the super-eight. This compounds the sense of nostalgia for a pre-digital age of dusty archives, when information had bulk to it, took up space, faded.
Bevan himself refuses to fade. After studying at Bradford School of Art and then at Goldsmiths, he has lived and worked in south east London (his current studio is in Deptford) for 40 years.
In March 2007 he was elected to the Royal Academy of Arts, and he’s upbeat about the state of British painting.
“There’s always been a strong painting tradition in Britain, historically, and that continues. It goes in and out of popularity. The world can be quite fickle. Painting will be in for two years and then something else comes along. But I always think of  tens of thousands of years ago when someone first put a bison on a cave wall. Putting an animal there is such a wild leap for the imagination. There’s always that potential for the extension of the imagination with painting, and I think that’s why it will always be relevant.”
Tony Bevan: Trees and Archives will be on show from 26 November to 3 January at Ben Brown Fine Arts, 12 Brook’s Mews, London W1K 4DG

Conceptual painter Catherine Storey contrives connections between hollywood and the artistic movements of the twentieth century with abstracted paintings of early film equipment.

Dexter Dalwood won a Turner Prize nomination in 2010 for his paintings which blend contemporary pop culture and art-historical allusions.

Bartholomew Beal’s brilliantly weird paintings mix the horror of Francis Bacon with the exotic beauty of Peter Doig. He’s already being snapped up by collectors.