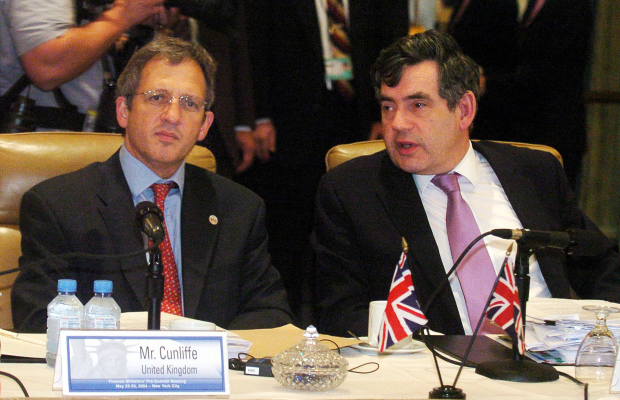 Sir Jon Cunliffe has been appointed deputy governor of the Bank of England for Financial Stability. Cunliffe, 60, will replace Paul Tucker who is leaving in the Autumn to become a Harvard academic.

Cunliffe has been the UK’s permanent representative to the EU since January 2012, covering policy issues like negotiations on the banking union and a number of financial services dossiers. Between 2007 and 2011, he was prime minister’s adviser on Europe and global economic issues, and has held a number of senior positions in the Treasury and the government.

Her Majesty The Queen has agreed, on the recommendation of the Chancellor of the Exchequer and Prime Minister to appoint Sir Jon Cunliffe, currently United Kingdom Permanent Representative to the European Union, as Deputy Governor of the Bank of England with responsibility for Financial Stability, starting on 1 November 2013.

As the Bank’s Deputy Governor for Financial Stability, Sir Jon Cunliffe will play a crucial role in ensuring the safety and stability of the UK’s financial sector and will sit on the Bank’s Court of Directors, the Financial Policy Committee, the Monetary Policy Committee, the Board of the Prudential Regulation Authority, and will represent the Bank on a number of national and international bodies.

The new deputy governor was behind the tripartite system set up by New Labour in 1997, whereby the Bank of England, Financial Services Authority and the Treasury worked together to regulate the economy.

A report from the House of Lords in June 2009 blamed the tripartite system for causing the financial crisis because it was not clear who was in charge and not enough attention was paid to macro-prudential supervision.

He was also the senior official in May 2010's talks over the first Greek bailout leading to the creation of the European Financial Stability Mechanism bailout fund.

And, however reluctantly, Cunliffe was the man who formally handed Tony Blair authority from the Treasury at an EU summit in December 2005 leading to a cut in Britain's rebate, thought to have cost the country's economy billions.

With his extensive experience in economic and financial policy, and very strong record of service at the highest levels of government in this country and internationally, Sir Jon Cunliffe will be an outstanding Deputy Governor of the Bank of England.

Current governor Mark Carney said he welcomed Cunliffe into the role, emphasising in particular his international experience with Europe and his role in negotiating a post-crisis international financial regulation strategy in 2009 when the UK chaired the G20. Carney would likely have met Cunliffe during G8 and G20 talks.

I am delighted that Sir Jon Cunliffe is to join the Bank of England.  I have been fortunate to have worked with Jon for over a decade on a wide variety of international issues at the G7, G20 and Financial Stability Board.  He is an outstanding public servant, with vast experience of financial and economic policy.  He brings an important European and international perspective that will be vital in ensuring that the Bank of England can shape both the UK and international financial systems so that they effectively serve the needs of the real economy.

Carney is known to have had a say in choosing the new deputy governor. While Cunliffe is a Treasury man at heart, the Observer's economics editor Heather Stewart said the appointment would have been a blow to Andy Haldane, who is currently executive director of financial stability. The appointment could be Carney's way of creating more change at the bank.

The HSBC economics team says Cunliffe's appointment could strengthen ties between the Treasury and the Bank, but warned against a possible further erosion of its independence.

Sir Jon's experience at the Treasury means he should fit into the MPC relatively easily, not least because on many occasions between 2005 and 2007 he was the Treasury representative present at MPC meetings.

I am delighted to have been appointed Deputy Governor for Financial Stability of the Bank of England. The Bank is of critical importance to the UK's prosperity and stability. It is both an honour and an exciting challenge to be joining the Bank now, as it takes on formally its new role and responsibilities for financial stability. I look forward to working with Mark Carney and all of the Bank team as this new chapter is written in the Bank's long and distinguished history.