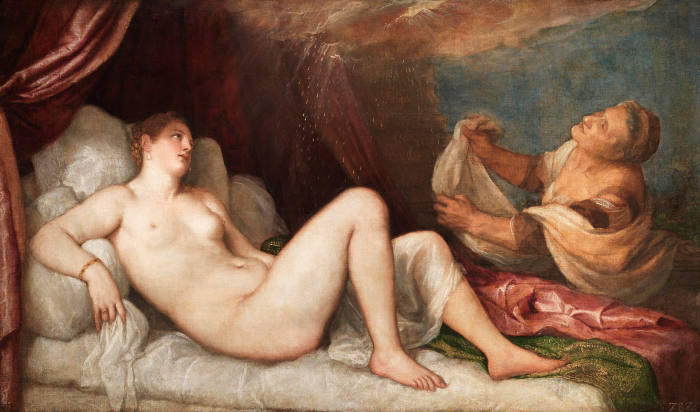 There are just seven paintings in National Gallery’s new exhibition Titian: Love, Desire and Death, but they pack a punch. This is the first time these great works have been exhibited in the same room in their 450-year history.  Poesie, Titian calls them — “poetic pictures” inspired by Ovid’s Metamorphoses. Commissioned by a 21-year-old Prince Phillip, not yet the King of Spain, Titian manages to distil whole myths onto a single plane. These are 16th century blockbusters, made to please a young Renaissance prince.

Accordingly, Love, Desire and Death is an ode to women, in all their fleshy glory. Painted to hang around a single room, Titian gives us the full 360 of female hips, thighs and clavicles. The most striking of these is Danae — the first of the series, and the most luminescent. Legs parted, lips agape, the Greek princess receives a “golden shower” of Jupiter’s love. Titian is titillating the viewer. For modern eyes, her insouciance is uncomfortable, but there is no doubt that she commands attention.

This is no mistake. Titian is probing the notion of the gaze head-on. The next two paintings, Diana and Actaeon and Diana and Callisto, present the female figure as both subject and object. In the former, Diana is chanced upon by a prying Actaeon. We see her naked rather than nude — she is vulnerable and furious. In the latter, we see her cast her own pernicious gaze onto Callisto, a rape victim stripped in an act of public shaming. Titian mines mythology to explore seemingly modern themes: shame, guilt, victim-blaming. As the best art does, Titian makes the gaze reflexive — who are you, the viewer? he asks.

As we pivot around the gallery, vanity turns to voyeurism — love and desire turn death. Headsets narrated by Stephen Fry, a self-proclaimed mythology expert, tell us that Titian is using the full spectrum of Greek myth to explore human emotion.

Compared to the gloss of his contemporaries, Titian’s brushstroke is loose and raw. The show ends with The Death of Actaeon — an unfinished work showing Diana seeking revenge on a peeping Tom that never made it to King Philip. It is a fitting ending — a painting about justice, doing justice to this great artist by bringing his collection together for the first time in history.