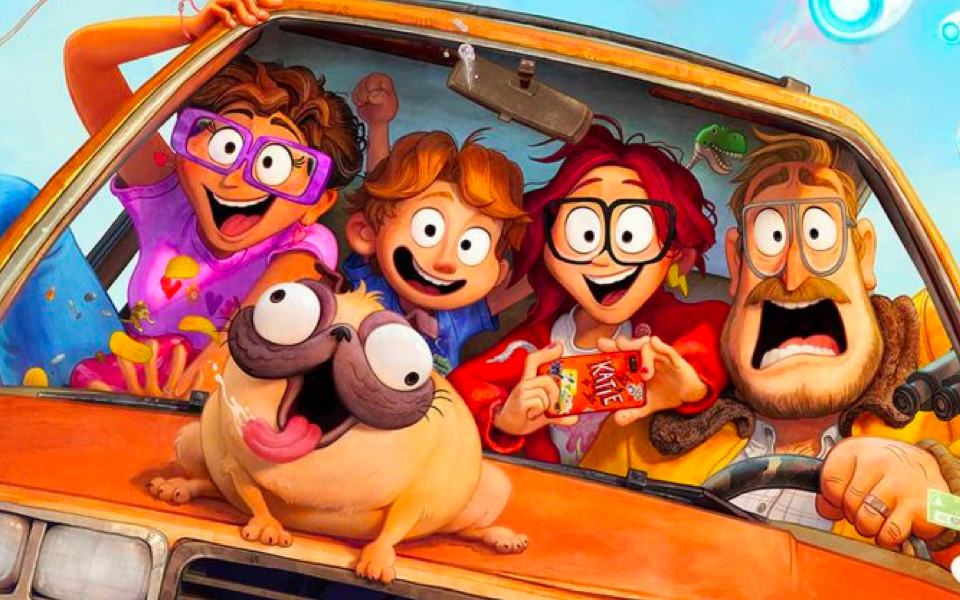 It’s rare to find an original film that generate a lot of hype in this sequel and ‘shared universe’ obsessed industry. However, when there’s a new film from the producers of Cloudy With A Chance of Meatballs and the much-adored Into The Spider-Verse, people sit up and pay attention. Netflix certainly did, paying big money to shift Connected from cinemas to their service, and give it a new title: The Mitchells Vs The Machines.

This animated comedy tells the story of Katie Mitchell (voiced by Abbi Jacobson), an imaginative young filmmaker who dreams of finding her “people” when she’s accepted into film school. She feels disconnected from her family, particularly her father Rick (Danny McBride), a wilderness lover who doesn’t understand technology. In a last ditch attempt to save their relationship, Rick forces the family on one last epic road trip to take Katie to her new school. There’s just one problem – on the way, an obsolete personal assistant (Olivia Colman) stages an uprising, turning all technology against mankind. With the fate of the world at stake, The Mitchells must work together to save the day.

It’s not just the family that work together, everything seems to mesh perfectly in this joyous and hilarious misadventure. On the surface, there’s a lot of gags about our reliance on technology, and the omnipresent screens in our lives. However, it’s also about embracing the difference in you. Rick is a rotund, boorish man who loves screwdrivers almost as much as his family; mother Linda (Maya Rudolph) makes terrible cupcakes and envies the neighbours; son Aaron (Mike Rianda) behaves like a dinosaur; and then there’s their stinky, awkward pug Monchi (Doug The Pug). They’re a dysfunctional mix of mild contempt and limitless love. In short, they feel like a family.

The rapid-fire jokes in the script skewer the carelessness of Big Tech (“who would have though a tech company wouldn’t have our best interests at heart?” muses Linda), and causes humans to go feral when all WiFi is switched off. However, as Colman’s delightfully demonic villain reminds us, technology has the potential for a lot of good, but the way we use it makes it problematic. There’s also some LGBTQ+ representation in Katie, who is referenced as being gay in a way that suggests it’s not an issue for The Mitchells (“don’t hide your feelings, that’s no way to live” she advises Aaron at one point). It’s only discussed in two tiny moments, but in a genre where Queerness is suggested but not confirmed, it feels like a win.

A run time of nearly two hours is a lot for a family film, but luckily there’s some terrific action to fill it. Of the many madcap moments, seeing thousands of Furbys invade a mall, calling to their leader, is something you won’t forget in a hurry. The bright lights and Spider-Verse style, mixed media animated is complimented by great casting choices even in the small roles. Comedians Fred Armison and Beck Bennett are a terrific sideshow as defective robots who help The Mitchells, while Eric Andre is Colman’s baffled scene partner as the hoodie wearing founder of the Amazon-ish company creating all this tech.

Topical without being preachy, there is something for everyone in The Mitchells Vs The Machines. It’s a modern comedy with traditional sentiments, bridging the generational gap in a hilarious way. If you want something that will make you smile while the real world feels like it’s falling apart, this certainly fits the bill.