The Doctor at the Almeida review: Robert Icke signs off with a masterful medical ethics drama 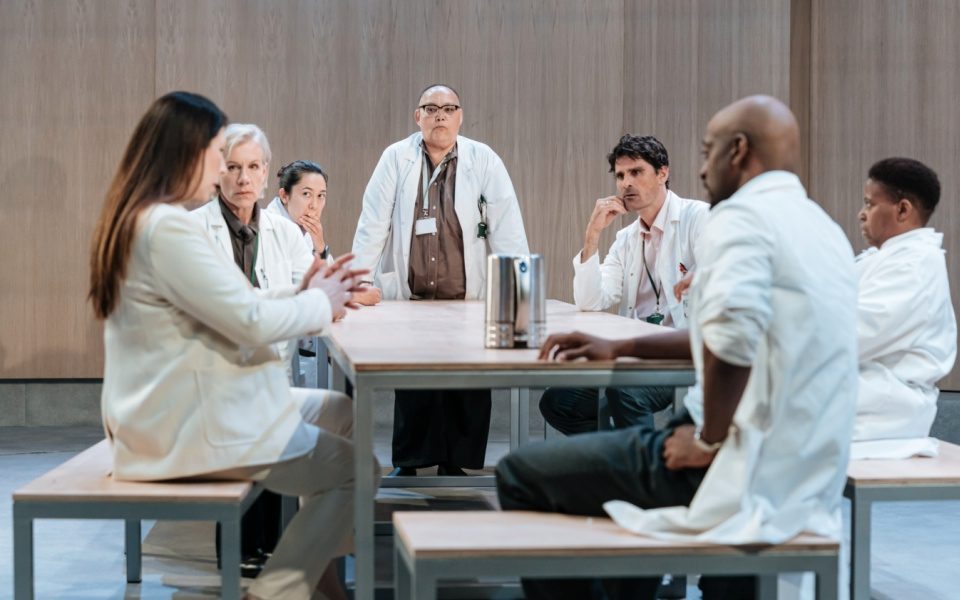 Robert Icke approaches a classic play the way a mechanic might approach a motor, breaking it down to its constituent pieces, working out what makes it tick, and then replacing half of it with gleaming new parts.

This approach paid dubious dividends in his largely hellish revision of Ibsen’s The Wild Duck last year, but here he dissects Arthur Schnitzler’s 1912 medical ethics drama Professor Bernhardi with the exacting hand of a brain surgeon.

For a play that runs to almost three hours (a fact barely worth mentioning in this era of interminable productions), it’s remarkably dense, ruminating on issues as diverse as ethics, religion, identity politics and internet culture, yet somehow weaving it all into a coherent, magnificent whole.

The central conflict arises when Professor Ruth Wolff, the founding physician of a cutting-edge dementia research facility, refuses to allow a priest to perform the last rites on a teenager dying from a self-administered abortion. She says the decision was based on her desire to give the girl a peaceful death, but she does little to hide her contempt for the Catholic church, or for religion as a whole.

Juliet Stevenson is imperious in the central role, bringing just a flicker of warmth to the hard-nosed Wolff, a formidable intellect who suffers no fools, even if they happen to be medical consultants or hospital board members. Her politically naive refusal to concede even an inch allows the growing scandal to snowball into a nation-wide controversy.

Icke obsesses over the role identity politics has to play in the drama. How much can we read into the fact that Wolff is a secular Jew? Or that she is on the cusp of overlooking a black Christian doctor in favour of a Jewish woman? Or that she is gay? Nothing, probably, but that’s not the way a vocal chorus of  internet trolls read the situation.

Muddying the waters further is the play’s blind casting. The priest, for instance, is played by The Thick of It’s “angriest man in Scotland” Paul Higgins, who is white, but is revealed mid-way through to be black. Elsewhere, male actors are revealed to be women and vice versa. Any prejudices unconsciously brought to the table are ingeniously turned against us.

Icke refuses to say who’s right in this whole sorry mess, which descends into antisemitic hate crimes and shamings on national TV, only suggesting that Wolff is perhaps less wrong. It’s a masterful exploration of some of the most hotly debated topics of our time, presented in the unmistakable timbre of one of theatre’s most exciting voices. This will be Icke’s final play as associate director of the Almeida – he will be a difficult man to replace, but what a way to sign off.