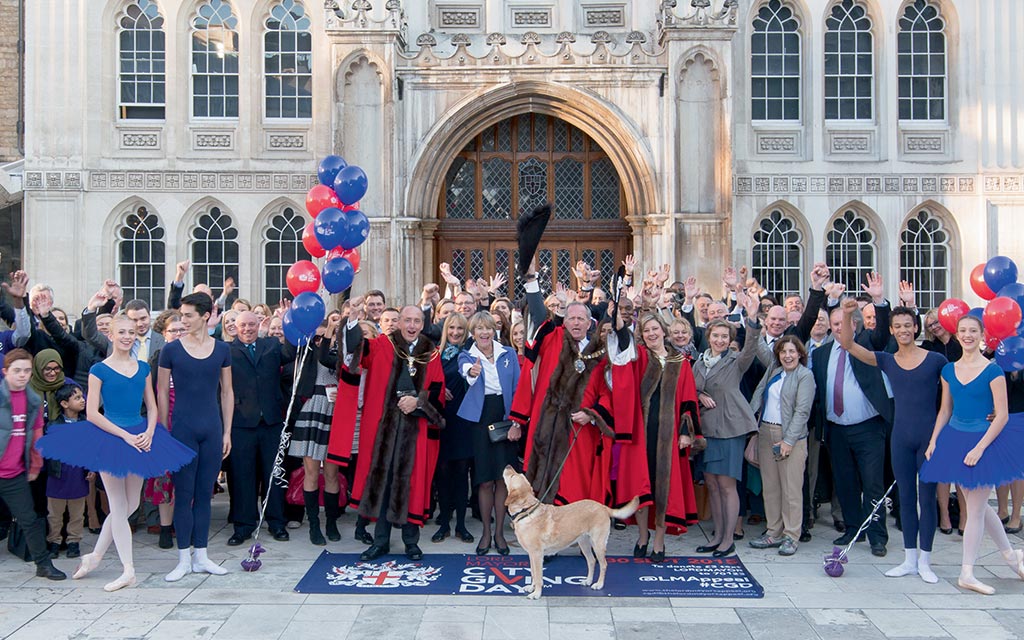 Lord Mountevans, Lord Mayor of the City of London, on the City’s charitable highlights

The year is drawing to a close and for the City, it has been a fantastic year for charitable outreach.

In addition to promoting the City as a global centre for financial and professional services, I will be picking up the baton from my predecessor Alderman Alan Yarrow in championing the outstanding charity work that goes on here in the City every day. The former Lord Mayor has helped show the other, softer, side of the City.

The City has been associated with philanthropy since the days of the medieval Lord Mayor, Dick Whittington, and people in need still benefit from the fortune he bequeathed all those centuries ago. But at the City of London Corporation, we are concerned with making philanthropy and other charitable activities relevant for the 21st century. For the City and the economy as a whole to succeed, it is vital we have a buoyant voluntary sector to improve the lives of the most vulnerable. We also recognise the important convening role as well as funding role we play in supporting and strengthening charities across the capital. There were some great examples of this work in 2015 and we will seek to build on this in 2016.

HOW BUSINESS EXPERTISE IS STRENGTHENING CHARITIES
Fundraising through charity bike rides, bake sales and fancy dress is particularly visible in City offices around this time of year, but there is also a lot of valuable and important volunteering that goes on behind the scenes. This year our City Action initiative matched 618 business volunteers with community groups and charities across the capital. Many of these volunteers use their professional expertise in areas such as financial planning, PR and marketing, data analytics and HR to improve charities’ practices, so they can deliver a more effective service to the people who really need it. Across London, billions of pounds’ worth of support is given to community projects by City employers and employees.

This year’s Lord Mayor’s Dragon Awards was a fantastic demonstration of skills-based volunteering and a chance to acknowledge the fruitful relationships between the corporate and charitable worlds. Between them, the 2015 applicants volunteered over 92,000 hours, delivered an equivalent value of £6m and benefitted almost 300,000 Londoners. The quality of this year’s winners should motivate other businesses to start their corporate social responsibility journey or share best practices.

Alium Partners, one of the Awards’ winners, used its expertise in recruitment to volunteer with a youth charity working with young people in east London facing significant barriers to employment. The volunteers provided employability and CV writing workshops, as well as boosting the confidence of the participants.

They found that despite usually coaching chief executives and MDs for top jobs, some of the principles around interview techniques were very similar for people trying to secure entry level jobs. Alium’s pro bono support resulted in half of the job candidates entering work after just three months and 75 per cent sustaining employment after nine months.

Another inspirational winner was Barclays, which won in the long-standing achievement category for its relationship with Ian Mikardo High School in Tower Hamlets. The special school teaches boys who have learning disabilities and complex behavioural issues. Barclays volunteers provided mentoring to the pupils, helped them develop financial and budgeting skills and provided funding for a support worker to strengthen the school’s ties with parents and the local community. This holistic approach saw 97 per cent of the pupils who were at risk of becoming a NEET (not in education, employment or training) enter work or further study when they finished school. I am very much looking forward to my Lord Mayor’s Dragon Awards next autumn and celebrating more inspirational City stories.

GIVING EVEN MORE
Another charitable highlight of 2015 was the 20th anniversary of the City of London Corporation’s charity, City Bridge Trust. The Trust has awarded over £300m in grants since it was established in 1995. To mark that anniversary City Bridge Trust, which is the largest independent grant-maker in London, increased its annual grants budget from £15m to £20m per year, meaning there will be even more financial and strategic support available to charities across the capital.

And of course, we can’t talk about giving without mentioning City Giving Day, in which City A.M. played a vital role. Hundreds of City workers (many in fancy dress) from firms large and small took to the streets on 30 September to, celebrate the fantastic charitable work that goes on in the Square Mile. Money was raised and spirits were lifted by what proved to be a fun-filled day, while a defiant message was sent that Corporate Social Responsibility (CSR) is very much alive. During my year in the Mansion House, I hope to make City Giving Day even bigger.

MAKING SURE OUR YOUNG PEOPLE ARE UP TO THE JOB
The City of London Corporation recognises that for the City to flourish and remain a key driver of economic growth, we need a skilled and talented workforce. Indeed our policy chairman Mark Boleat often speaks about the importance of young people from all walks of life seeing the City as their engine for growth. Much of the Corporation’s charitable outreach is focused on boosting the employability of young people from our neighbouring boroughs, some of whom live in the poorest areas in England. Last year, through various initiatives, the City of London Corporation introduced over 3,000 residents from the City’s fringe boroughs to employment and learning opportunities in the City.

Our flagship City Business Traineeship programme is just one example of young people from diverse backgrounds getting that vital legup into the City’s job market. The young people complete paid internships at firms including Société Générale, Deloitte, RBS and the Bank of England, learning about investment banking, trading, marketing, sales and much more. This year, over 100 A-level students benefitted from the programme, 91 per cent of whom were from black or ethnic minority backgrounds and 55 per cent female. This initiative not only allows employers to benefit from a pipeline of untapped talent, but helps them to diversify their workforce.

2016 will undoubtedly produce many more charitable highlights for the Corporation and the City as a whole. I’m looking forward to being a proud ambassador of this work as well as raising awareness for my chosen charities, JDRF (the type 1 diabetes charity) and the Sea Cadets.