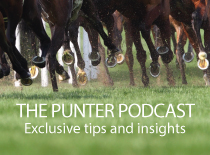 Trainer Owen Burrows talks about his weekend’s runners, which includes the Sheikh Hamdan owned Hukum, who runs in the Group 3 Geoffrey Freer Stakes at Newbury.

The Scoop 6 was not won last Saturday, and Kevin O’Malley from the Tote joins us to help find some winners.

We also have part one of our interview with Qipco British Champions Series boss Rod Street, discussing the prize money situation for this year’s meeting in October, whilst City A.M. racing editor Bill Esdaile joins us once again to preview all the best racing action this weekend, including the Prix Jacques le Marois at Deauville on Sunday. Hosted by Chris Barnett