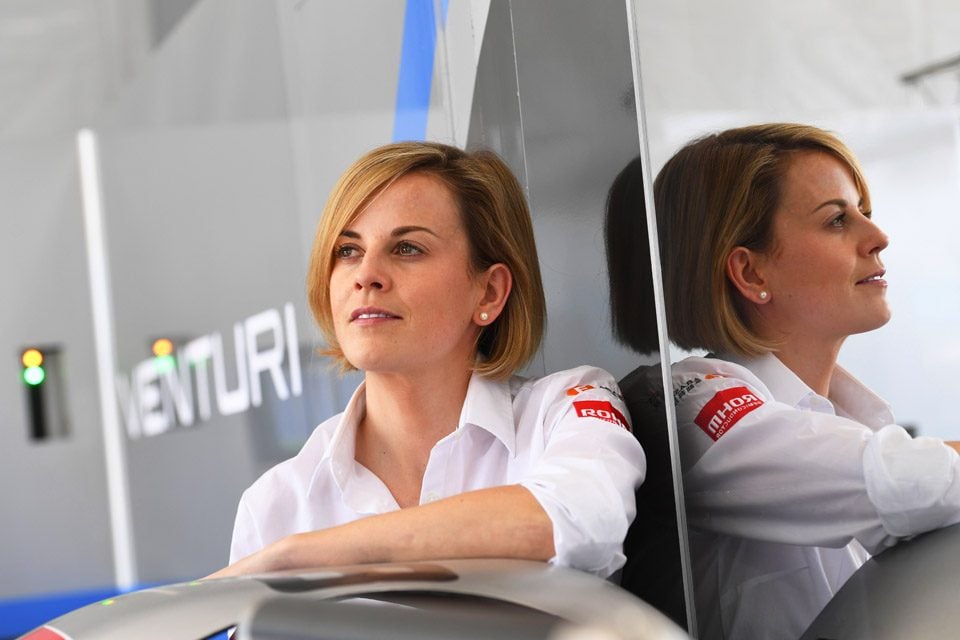 Five years ago, Susie Wolff made history by becoming just the sixth woman to be involved in a Formula One grand prix weekend, and the first since 1992.

Today, the Scot is continuing to help break down gender barriers in motorsport, although now she is doing so as a team principal, in charge of Venturi, the Formula E outfit co-founded by Leonardo DiCaprio.

Becoming the inspirational figure Wolff, 36, has to young women in a male-dominated world is a role that she has held since breaking into the DTM touring car series in 2006, although it is not one she necessarily wanted or expected.

“I’m actually just doing the job that I love,” she tells City A.M. “I’m not doing it because I want to lead the way for other women. But I know for myself from being a young girl that role models are important, and if I can pave the way to show what’s possible I think that’s really positive.”

It may not have been foremost on her mind as she competed against the likes of former DTM champions Paul di Resta or Gary Paffett – now also in Formula E – or perhaps even when she was testing her Williams Formula One car against the best in the world that her position in the sport gave her an opportunity to encourage female involvement.

But since retiring from racing in 2016, she has become more active in promoting equal opportunities, launching Dare to be Different, an initiative aimed at increasing women’s participation in motorsport as well as other male-dominated industries.

Felipe Massa is one of Wolff's drivers at the Venturi team (Source: Getty)

Her role as a team principal within the electric racing series also allows her to champion that cause from within, something she feels there is a great appetite for.

“Formula E have been very supportive in helping us promote diversity and give opportunity to women,” says Wolff. “In the end it’s never down to one person or organisation, it’s about doing something to create change and it being supported as a whole. It’s not going to happen overnight, but what’s most important is that we are doing something.”

Wolff is not the only woman to blaze a trail in motorsport, but she is one of very few.

Formula One has had just two female principals: Monisha Kaltenborn, who took charge at Sauber between 2012 and 2017, and Claire Williams, who is technically a deputy to her father and team founder Frank but runs it day to day.

This month saw the start of the women-only W Series, while the most high-profile current racer is perhaps Tatiana Calderon, a development driver at Alfa Romeo’s F1 team who also competes in GP3 and was one of 10 women to test Formula E cars at the Saudi Arabia ePrix last year.

“It comes down to increasing the talent pool. The more women you get in racing, the more the best rise to the top,” Wolff says. “I believe massively in giving female drivers the opportunity and that’s something Formula E has been very proactive on.

“Some of the women did a fantastic job at the Ad Diriyah test and showed they were capable of competing at this level.”

Susie Wolff has had a front row seat of her husband Toto Wolff's (right) success at Mercedes (Source: Getty)

Wolff is open to bringing in a female driver into Venturi, who sit seventh of 10 teams after nine races, but says she is happy with her current line-up of former F1 star Felipe Massa and ex-DTM driver Edoardo Mortara.

She joined the team last year as principal and shareholder, and brings extensive experience on the track – as well as know-how gleaned from a front-row seat of husband Toto Wolff’s success with Mercedes in F1.

“I have the perspective of being a driver, a huge network within motorsport and a lot of experience, but I also don’t want to underestimate the luck I’ve had to watch my husband do his job,” she adds.

“It’s that knowledge that gave me the belief that I could do this job. I’ve been able to watch him win five world titles so I think the combination of the two has really allowed me to do this.”

From next year, Toto may have to guard what information he divulges as head of Mercedes-Benz Motorsport, given their impending entry into Formula E.

Although their teams will be in direct competition in the series, Wolff says her husband will not take on the same role he has in Formula One due to their overlapping schedules. Nonetheless, the prospect of an inter-family rivalry does not faze her.

“We will be competing against each other, but I have no issues whatsoever with that,” she says. “We have our work and our private life and they are separate.”