We've studied the charts, now our companies analyst runs through the fundamentals and gives his view.

At a time of questions over durability of growth in US GDP and corporate profits, results in respect of Q1 2019 from Amazon.com Inc (NASDAQ:AMZN)and Microsoft (NASDAQ:MSFT) have beaten expectations.

Results beats plus stocks rising imply a healthy market tone – at least for these two – whereas elsewhere there have been a few grumbles from commentators that stocks look a bit tired in response to strong updates.

In particular, the Amazon Web Services (AWS) side – seemingly a curious offshoot in inexpensive cloud computing albeit watched as a growth driver – surged 41% year on year to $7.7 billion and to rival North American profits as the biggest segmental contributor.

A new storage class "Amazon S3 Glacier Deep Archive" expanded options and enjoyed keen customer intake, likewise other innovations. AWS has launched in Asia Pacific and has plans for four other regions; with recent new blue-chip customers such as Choice Hotels International (NYSE:CHH), Lyft (NASDAQ:LYFT) and Standard Bank Group – due to its robust offering and data analytics. Large companies are increasingly relying on AWS which constitutes quite a moat. Amazon Prime, which (in my experience) has had a determined effort to get regular customers to sign up, sustained its momentum, helped by Whole Foods in grocery and an ability to specify any day of delivery and one-day free delivery as normal. A two-hour offering for Whole Foods via Prime Now is also witnessing strong demand, also grocery pick-up – as if Amazon marketing is well-attuned.

Moreover, its "Alexa" voice-based app for a host of domestic applications – even vehicles – has reached 90,000 skills, and Amazon Studios expanded its media offerings – all on a near global basis. The group's diversification narrative is truly impressive in terms of capitalising on the original Amazon brand: "Virgin on steroids"? 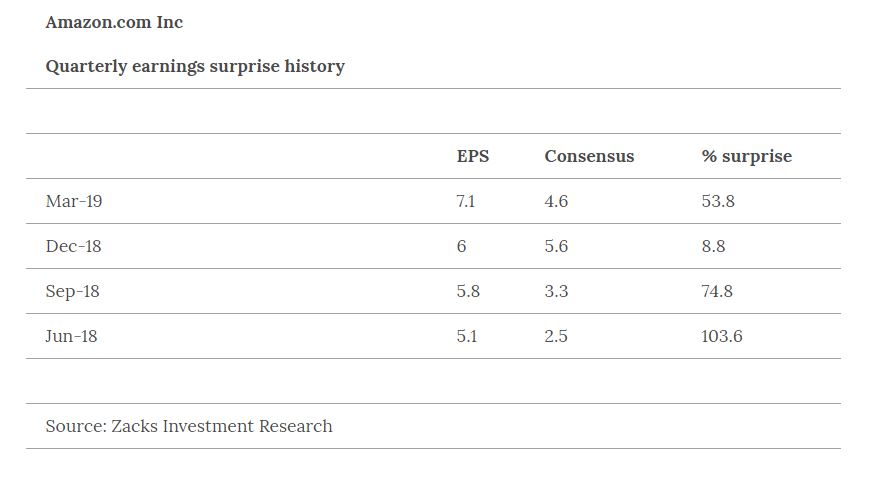 Shift from products to services

The new businesses are helping service sales up 31% to constitute 43% of sales, year-on-year, versus products up 9% to 57% of sales and, while operating expenses are up 12.5%, they are down 3.6% as a percentage of revenue.Shift from products to services

Guidance is for overall revenue growth of 13-20% which is quite a range, within which North America is trending around 17% and International 9%, the 41% for Web Services bumping up the group number to 17%.

So, as Amazon enters a period of high spending as it transitions towards things like artificial intelligence and the smart home, this track record of successful new services development augurs well – both fundamentally and in terms of investor sentiment, while another investment phase gets underway.

The one-year chart still shows Amazon losing 31% of market value from September to December 2018, versus 17% for the S&P 500 index, illustrating how the "FAANG" stocks are more prone to volatility than the market.

You could say it's because they are fundamentally overvalued hence as soon as there are signs of underlying growth breaking down they become a paradise for short sellers. But Amazon's beating expectations and bullish narrative imply momentum yet. So, for traders who appreciate the risks, buy the dips.

With 20% growth in diluted EPS to $1.14 in its third quarter (calendar 2019 Q1), this technology behemoth has now delivered seven beats to consensus in the last eight quarters, its stock quadrupling to $129 since I initially drew attention at $24.75 in May 2011 along a classic investment rationale of "the big unpopular company".

The forward PE then was under 9 times as I considered "at some point in the next year or two, the IT corporate spending cycle is likely to kick in, with Microsoft still the preferred supplier." The group has diversified into devices and services and, updating my analysis in 2013/2014, I thought the risk/reward profile still attractive given strong market conditions and medium-term catalysts.

The PE has now expanded to around 30 times as Microsoft's value entertains $1 trillion as investors salivate over 41% growth in its Azure cloud business to $9.6 billion. Microsoft is also upgrading users of legacy products such as Excel and Word, to its cloud-based Office 365 suite whose sales are up 30%.

Nowadays one for alert momentum traders

The business model favours recurring revenues, so is therefore conducive to self-funded investments and dividend growth, although after the share price rise of recent years the prospective yield is only just over 1.5%.

That's unsupportive if it is the case, earnings growth in a 17-20% range in recent years reverts to a level nearer 10% on a 20-years' historic view.​

Obviously, it's hard to apply concepts such as mean reversion to fast-moving technology, where innovation can always spur another phase of growth. Yet Microsoft may exemplify the dilemma how the US stock market is now in an awkward phase where valuations do look full and you are looking/hoping corporate narratives and earnings beats will continue selectively.

In this sense it's hard to counter the underlying momentum: Azure grew at 73% year-on-year in the last quarter, within Microsoft's "Intelligent Cloud" division that's currently just less than a third of group revenue, but management is guiding for it to be the largest segment this current quarter. Thus, its potential to predominate could sustain a mid-teens growth rate for the group in years ahead.

The chief executive argues Azure is only just an infrastructure type service, it opens up new markets and facilitates cross-selling: "In cloud services we offer infrastructure, data and artificial intelligence, also productivity and collaboration, besides business applications. That's pretty unique and showing up not only in our numbers but most importantly in customer momentum." 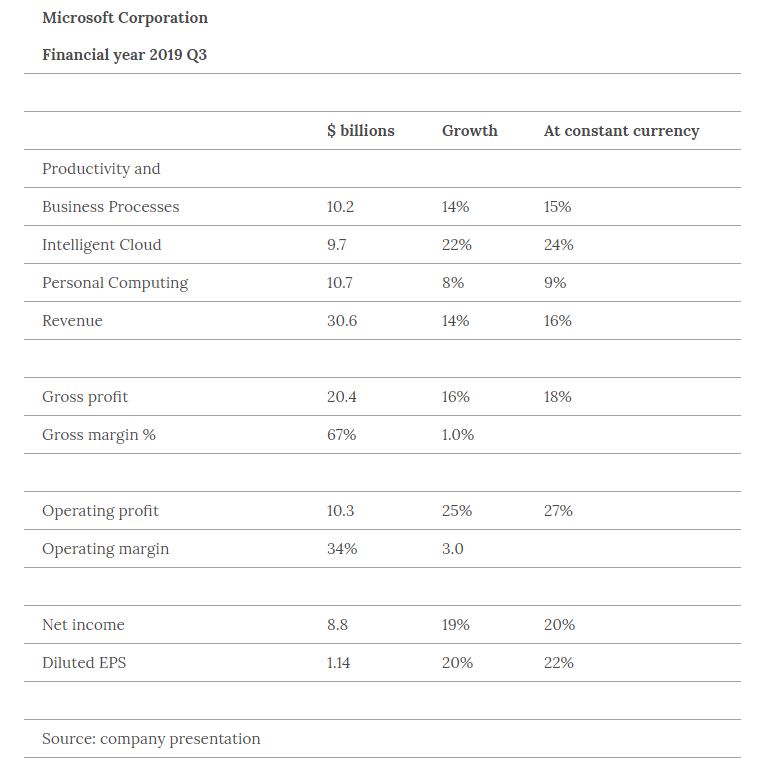 So, shareholders are betting that Microsoft is rather uniquely positioned to service customers' entire digital transformation needs – additional to providing cloud servers for their data – which not only is a competitive advantage, it can justify a premium stock rating for some years yet.

That Microsoft can build on serving industries such as retail, healthcare, manufacturing and finance, where previously it has not been well represented. Cloud as a means to Internet of Things (IoT) business where Microsoft is in year two of a four-year programme to invest $5 billion and recently acquired IoT leader Express Logic.

In the earnings call, management insisted its other businesses have a bright future besides cloud services, especially applications across LinkedIn and Power Platform. The bull pitch is thus Microsoft has potential to layer on other services as customers undertake their cloud migrations, providing superior growth for some years to come.

The bear caution would be "cloud", now a fashionable area liable to attract more competition, so shareholders in Microsoft and/or Amazon need to keep their wits attuned to the dynamics. I'd take a similar stance as on Amazon, with a speculative caution: Buy the dips.