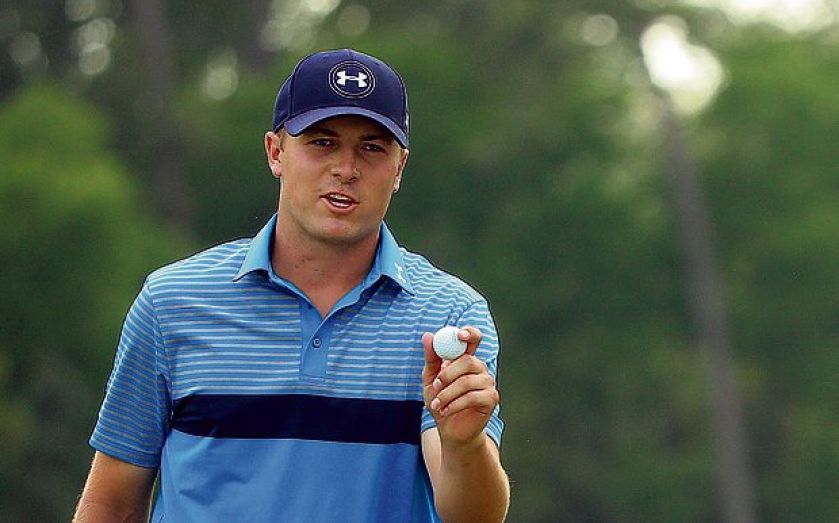 WONDERKID Jordan Spieth confirmed his reputation as one of golf’s most exciting talents last night by setting the pace at the Masters with a blistering eight-under-par first round of 64.

The 21-year-old American, who finished joint runner-up on his Augusta debut last year, carved a three-stroke lead over his nearest rivals, a four-man group that includes England’s Justin Rose and Australian Jason Day.

World No1 Rory McIlroy mustered only a modest one-under-par 71 in a conservative start to his quest to complete a career grand slam, while Tiger Woods battled to a scratchy one-over-par 73 on his comeback.

But it was Texan Spieth who stole the show, racing to four under par at the turn and at one point threatening to dip under 63, the all-time record low score for a Major tournament round.

His only aberration came at the 15th, when he bogeyed to slip back to seven under par, but recovered the shot at the last hole, where he crowned a spellbinding display with a long birdie putt.

“Last year I was really tentative but this year I was a little more ready to fire at some pins,” said Spieth. “There are a lot of great names that aren’t going to go away. I just need to keep my head down and stay patient.”

World No5 Day – twice a top-three finisher at the Masters – roared into contention with a string of five consecutive birdies from the 11th to the 16th holes, only to bogey the next.

He joined Rose, veteran Ernie Els and unheralded American Charley Hoffman on five under, with the Englishman crediting playing alongside defending champion Bubba Watson for inspiring him.

“I had a great pairing; I felt there was a good energy,” Rose said. “I haven’t been in contention this year but that draw made me feel like I was in contention and got the juices flowing.”

Watson, who also won the Green Jacket in 2012, shot the same score as McIlroy, who declared himself content to start his bid for the only Major to elude him with a pedestrian 71.

“I battled well and got some good up and downs and one under is a decent score,” he said. “I was a little nervous, very excited and just kept telling myself to be as patient as possible because four days around here is a long time. You don’t want to get off to an anxious start.”

UP AND DOWNS: DAY ONE AUGUSTA DIARY

Former world No3 Paul Casey revealed the secret behind his strong three-under-par opening round: not really caring. “No matter how I play it’s not the biggest thing in my life right now,” said the Englishman. “I got away with a couple of interesting tee shots but didn’t feel bothered.”

Steady scores all round for past winners. Three-time champ Phil Mickelson was two under, while reigning champion Bubba Watson’s 71 was typical. Charl Schwartzel, who wore the Green Jacket in 2011, made the same score, and Adam Scott (2012), Angel Cabrera (2009, inset) and Zach Johnson (2007) shot even-par 72s.

Umbrellas were not needed on the first day of Major season despite some fears of rain, but today could be a different matter. Forecasters expect showers and even thunderstorms in the Augusta area during the second round, which could hold up play. There looks little risk of delay to Sunday’s finish, though, with fine weather due all weekend.

It may have been his Masters debut but that did not stop England’s Danny Willett from sinking a monster 60-foot putt for an eagle at the 13th hole. The 27-year-old from Sheffield, who is ranked 51st in the world, finished his first round at Augusta National by signing for a very respectable one-under-par 71.