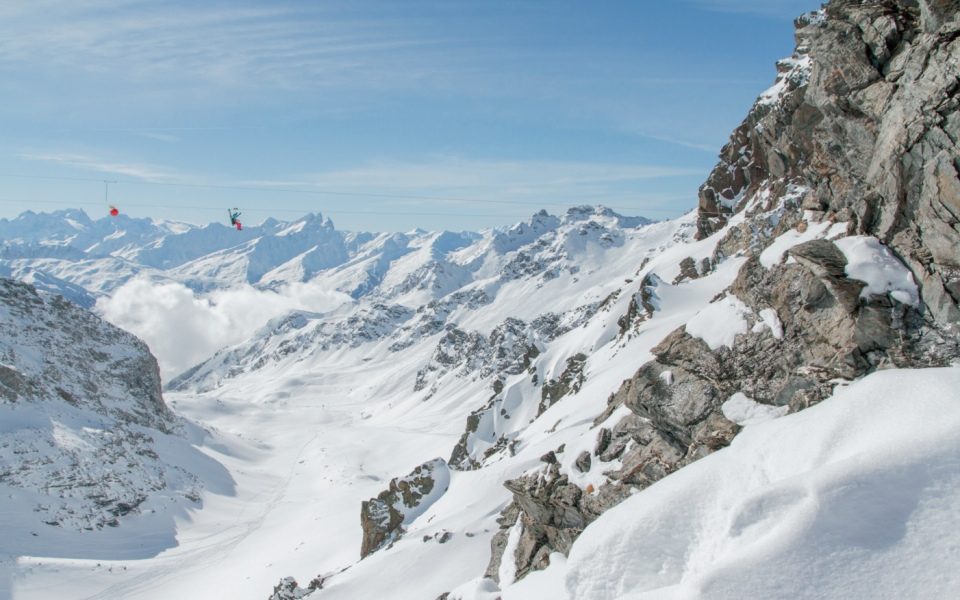 I’ve mastered the chair lift, and nine times out of 10 will make it to the top of a drag lift without ending up on my behind in the snow. The suggestion I received over drinks in a bar that I might want to try “skiing on a rope” at 100 km an hour, however, left me bemused and curious in equal measure. This Alpine tightrope trick hardly sounded like something for the amateur skier, let alone one who had rather enjoyed the apres ski the night before.

The Tyrolienne, as it is called, turned out to be slightly more robust than “a rope”, but no less terrifying than I feared. Had my French been better, I’d have realised that it’s not just a name, but the word for zip line. The steel cable stretches more than 1,300 m from Orelle to Val Thorens, reaching a top speed of 105 km per hour.

At its high point, I dangled 250m above the ground, a fashionably oversized pair of SunGod Vanguards protecting my face from the worst of the piercing wind. For the few, snatched moments that I dared look out through the goggles’ pink-purple lens and admire the rose-tinted valley, the views were spectacular. The part of me that wasn’t screaming felt like a bird of prey soaring on the thermals, the skiers far below little more than Lego men. I was completely out of control, but the fear was tinged with exhilaration.

France’s Three Valleys is the biggest ski area in the world, with some 600km of slopes, 321 pisted runs, and 169 high performance lifts. The season lasts from December until April, drawing tens of thousands of skiers and boarders. But the valleys’ resorts — and Courchevel in particular — are expanding their offering year on year, broadening their appeal. Here you won’t be missing out if you have an old injury that holds you back form downhill skiing, or a young family in tow who need to be entertained.

Having recovered from The Tyrolienne with a stiff drink in a slopeside bar, I swapped my skis for snow boots and set out for Art at the Summit, an impressive outdoor art exhibition spread across multiple sites. For the past 10 years, Courchevel has teamed up with Galeries Bartoux to bring sculpture to the resort. Dali’s Alice in Wonderland and Horse Saddled with Time are greeting visitors to Courchevel 1850, but the really dazzling pieces are accessible only by cable car.

I lurched around the first ice lined bend, rolled, and fell out on the snow, legs flailing and laughing hysterically. It is not quite as easy as it looks.

Richard Orlinski, the French pop artist, has created a series of oversized, luridly coloured creatures which seem to have burst out from the pages of a comic book. King Kong appears in various guises, one beating his blood red chest, another brandishing a pair of skis above his head. I found Orlinski’s proud red stag and midnight blue wolf to be rather more attractive and in keeping with their surroundings, but King Kong certainly had a devoted queue of excitable skiers and art lovers desperate to snap a selfie with him.

To get off the mountain you can retreat the way you came, but on the way up a race track had caught my eye. Moriond Racing is Courchevel’s answer to Mario Kart.

This 3km track loops through the forest, twisting and turning through eight tunnels. The vehicle — if that’s the right word for it — is a simple plastic sled, but I promise you it moves at quite a lick on the steeper descents. With the right adjustment of your balance and application of the metal brakes, you could probably speed around in style; I lurched around the first ice lined bend, rolled, and fell out on the snow, legs flailing and laughing hysterically. It is not quite as easy as it looks.

In our group of three, I was the last to leave the starting line, and a party of strangers was hot on my heels. I had some catching up to do. Forcing myself to overcome the urge to pull continually on the brake — which in any case had probably caused my first roll — and to pick up speed on the straighter stretches, I began making gains. On the snail shell-like spiral approaching one of the tunnels I almost overtook the sled in front, only to be thwarted by the narrowing of the track through the tunnel and  a very large pile of snow to one side. Thankfully, it was soft enough, and I made it to the finish with nothing more than a few small bruises and battered pride. My grin and the silliness of it all more than compensated for both.

Read more: Realise your cowgirl fantasies on a trek into the desert surrounding Palm Springs

What I will say is that sledding (and falling off of said sled) leaves you decidedly stiffer than skiing. I was immeasurably grateful, therefore, to discover the thermal waters of the Aquamotion pool and spa centre were just one escalator ride from my apartment at Residence Le C in Courchevel 1650. I discarded my boots and heavier layers with the building’s ski butler — what a joy! — and padded off down the mountainside.

Nothing beats the combination of steaming hot water, a snowy landscape, and fresh mountain air, especially when the light is fading, the sky turns pink, and the moon starts to rise over the peaks. Aquamotion’s architects have capitalised on this perfect merger of elements in Courchevel: though an extensive part of the complex is under cover, two swim out pools make the most of the great outdoors. I floated, staring up at the sky and the few flakes of snow falling from it, as jets of water pummelled my tired muscles from below. The temperature was like bath water, and the only noises which serenaded me were the bubbling of the jacuzzi and the faint sound of the wind in the trees.

Zen like and scarcely with it, I drifted back up the escalator to Residence Le C. One of my few coherent thoughts whilst in the water was a yearning for glass of wine. The Savoie department in which this part of the Alps falls is known for producing Génépi — a particularly fearsome local liqueur akin to absinthe and drunk neat — but there also some fine vineyards at lower altitudes.

Eight local wines have made the menu at Bistrot Le C, the Residence’s fine dining restaurant. I was tempted by the prospect of the 2016 Princess Leia — if only for its name — but in the end was advised by the waiter to try something a little less sweet. This was definitely the right call; the 2015 Chignin-Bergeron Les Salins slid down a treat, the ideal end to a ski free day in the Alps.

An apartment at Residence Le C in Courchevel 1650 starts from €368 per night and sleeps six people. For more details and reservations, see alpine-residences.fr