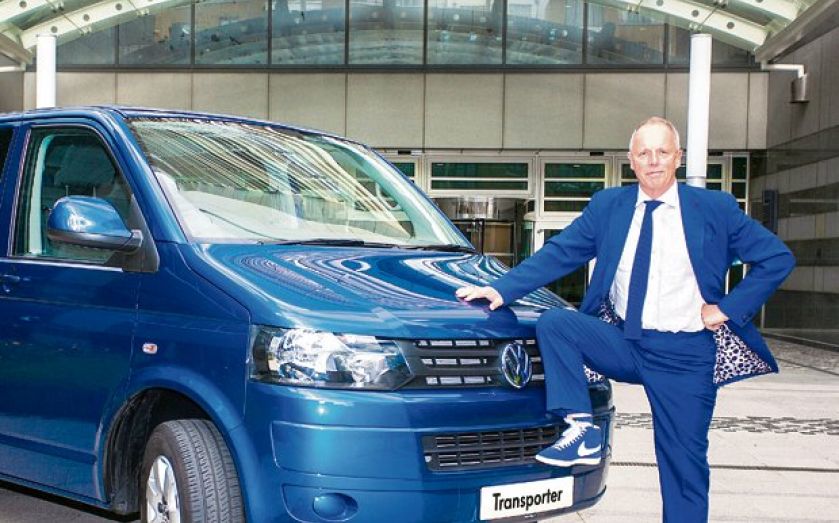 For one of Britain’s most ebullient entrepreneurs, Simon Woodroffe is modest about his first steps into business. “The initial motivation was desperation”, he says. The founder of Yo! Sushi, Yo! and former BBC Dragon says that he “started a restaurant in a world where I thought it might not survive.”

But this doesn’t mean Woodroffe has ever thought small. He founded the iconic Japanese eatery Yo! Sushi in 1997 with business partner Robin Rowland. Now, 17 years on, the chain has over 90 restaurants, and the Yo! brand spans pre-fab homes to spas. He founded one of his more recent ventures, Yotel, 10 years later. Its four branches offer opulent mini-rooms inspired by Japanese capsule hotels. With more imminent in the UK and US, it’s staking its claim as more than just a transit hotel, spreading the brand internationally.

Doggedly undeterred by high-risk strategies, Woodroffe is determined to take on the world. “Ten, fifteen years ago, anyone in business would say, ‘just stick to your own territory’. Now, with a brand like this, I look at the world. It’s not about the country: the world’s the marketplace.”

KNOWING YOUR PLACE
But this determination to expand doesn’t mean Woodroffe is afraid to let things go. He sold 75 per cent of his stake in Yo! Sushi in 2003, going on to sell the rest five years later. While he has retained control of the Yo! brand, he thinks the biggest mistake entrepreneurs make is to “hold onto things too long. One of the secrets of success is to figure out what you’re good at and then spend as much time as you possibly can doing that.”

Woodroffe sees himself as an ideas man – good at getting things started and enthusing others. “By 2003, I’d realised that I ought to be moving on to the next Yo! thing. I had no issues with relinquishing control. I knew I wasn’t good at running things.” Thankfully, Rowland was, and it is he who has grown the restaurant. Woodroffe is still entitled to a royalty of one per cent of gross sales.

The idea of the brand, of housing several separate businesses under one banner, was strongly influenced by the success of Virgin. Nobody else was doing what they were, says Woodroffe. “I very slowly started to imagine what it would be like if Yo! were to go into lots of different things, and I remember talking about the Yo! brand.” It took a lot longer than expected, and of course Yo! isn’t quite the household name Virgin has become. But Yo! Sushi is arguably on its way, and Woodroffe is optimistic: “What I did learn from Virgin is to do very few things, but do them well.”

Now, with a solid platform himself, Woodroffe is keen to share his expertise. He’s currently working on an eight-month business mentoring initiative with Volkswagen Commercial Vehicles, giving advice to businesses across the UK.  “I made myself a promise when I was starting out: if I ever got to be successful, if people called me, I’d always get back to them.”

A HELPING HAND
The five businesses Woodroffe is working on through the Volkswagen scheme have made “fundamental changes” to what they’re doing – they just needed a “prod”, he says. As far as Woodroffe is concerned, seasoned businessmen should do more. And he’s keen to recruit others to the cause. “‘Corporate social responsibility’: Why would you have a world for that? That’s just how it should be.”

He’s also honest about the mistakes he’s made: “For years, I suffered from the same disease all entrepreneurs have – the delusion that we know better than everybody else.” Being a megalomaniac at the beginning is no bad thing, he says. When people tell him they’ve got “this consultant, and that consultant”, he says “fire them immediately and do it all yourself.” But, he stresses: “Later, you do need a big team of people; let them do it their way and not your way.”

Doing things a bit differently has, on occasion, been forced on Woodroffe. He suffered what he describes as a “showstopper” as he set up Yo! Sushi, when the premises for the first restaurant, in Soho, fell through. It took another year to sort things out, but looking back, he sees it as a moment where catastrophe led to innovation: “If I’d opened at the end of year one, I’d have opened a typical sushi bar. But we got the conveyor belt, the robots, the speaking call buttons and everything that made it a big deal.”

EMBRACING THE NEW
Woodroffe was also lucky with funding – but only by way of ingenuity and being willing to take the risk.

A government loan of £200,000 and another £200,000, which was tied up in his flat, got him almost half the funding he needed. “The rest came from getting people to believe in what I was doing.”

By making Sony, Honda and Nippon Airlines sponsors and, rather unusually but ingeniously, putting them on the restaurant door, he managed to bag funding on perceived reputation: people saw the big names and assumed the business was safe.

Back in the day, he muses, funding meant friends, family and fools. “Now, you have crowdfunding. It’s absolutely magnificent for startups – and angel investment.”

“In spite of what everybody says, it’s a very, very good period for funding right now”. Low interest rates mean it’s cheaper to borrow, and it encourages lenders to go after the higher returns the startup world has to offer.

But Woodroffe’s enthusiasm for crowdfunding does come with a word of warning: “You have to be creative. People won’t invest in things just because they’re a good idea.”

Yo! Home is the latest Yo! business to offer simplicity with a luxury twist. Its high-spec, pre-fab mini-homes are Woodroffe’s answer to reinventing the city apartment. Confident he’ll strike a note between supply squeeze fears and the novelty factor, Woodroffe says: “You don’t know until you get the first ones built, but I think there will be a huge take-up. I think it’ll be much bigger than Yo! Sushi.” The second prototypes are being built now, and Woodroffe is confident of a launch next year.

“What’s very exciting about being an entrepreneur now is that the world is changing. Big companies find it much harder to change things.” Destiny, says Woodroffe, is something that more and more people have control over.

Lives currently: Chelsea, in a houseboat

Reading: The Secret History of the World, by Jonathan Black

Favourite Business Book: The Book of Yo!, by Simon Woodroffe

First ambition: To own a sailboat and sail across an ocean

Motto: One day at a time

Most likely to say: Let’s do it