Shakespeare on advertising: Boots hit the mark with Kylie campaign

Boots recently announced a partnership with Kylie Cosmetics. The American beauty company started out as a manufacturer of lip kits – and a brand-extension exercise for its namesake Keeping Up with the Kardashians star – before becoming a billion-dollar industry juggernaut. The brand’s cosmetics will be sold throughout Boots’ UK stores.

Data from YouGov BrandIndex shows that the move has gone down well among the general public. Between July 7 – the day before the deal was announced – and July 10, Impression (which measures whether consumers have a positive or negative view of a brand) jumped from 45.3 to 51.5 (+6.2); as of July 15, they had only fallen to 49.8.

Buzz scores, which measure whether consumers have heard anything positive or negative about a brand, saw an immediate jump from 7.5 to 12.0 (+4.5) between July 7 – 10, though they have since returned to a similar level (7.0 – July 15). Word of Mouth scores, which track whether consumers have spoken about a brand with a friend or family member in the past couple of weeks, saw a comparable rise and fall: on July 7, they were at 10.4; by July 10, they had risen to 14.8. They have since declined to 8.7 (July 15).

Read more: Shakespeare on advertising: Greggs can bake in profits with well-targeted campaign 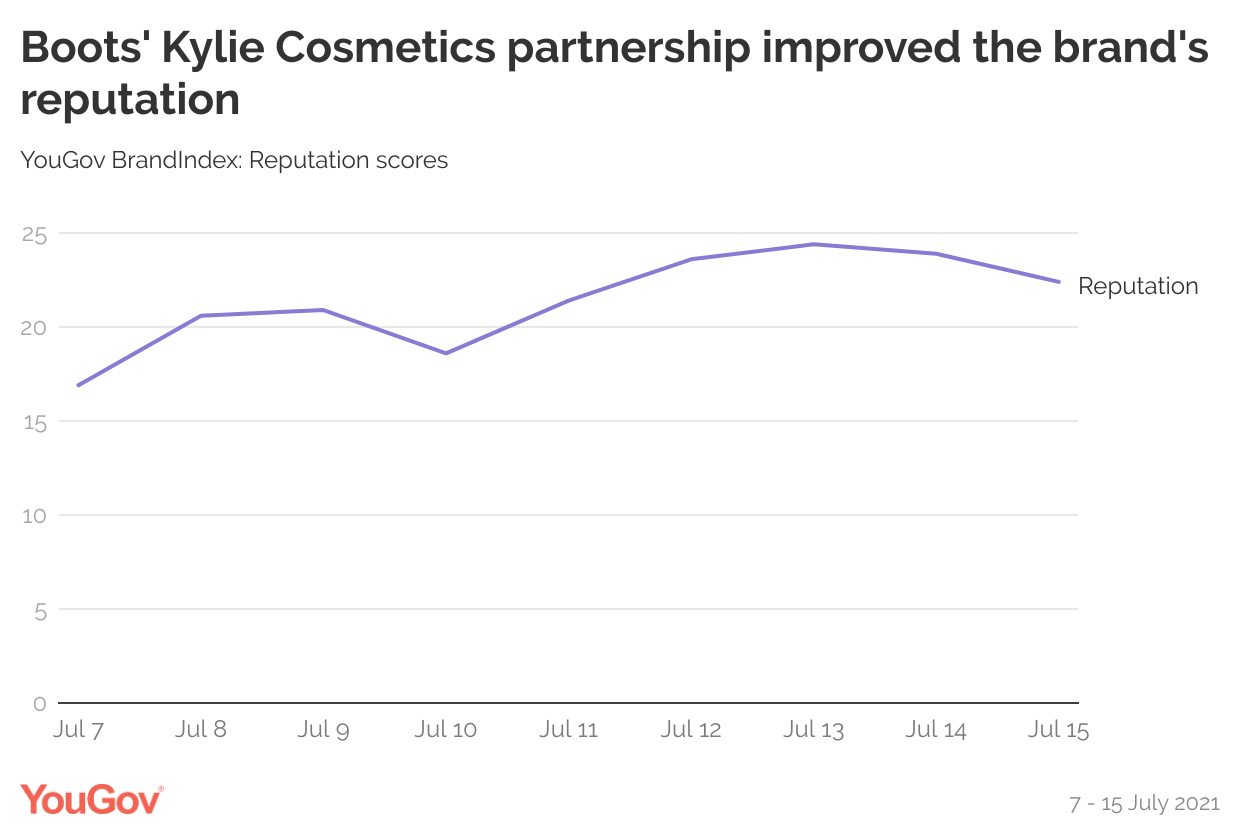 Beyond the immediate impact of the announcement, there was a noticeable improvement in Boots’ overall Reputation scores – which gauge whether a consumer would be proud or embarrassed to work for a particular brand. The data shows a +5.5 uptick in this metric between July 7 and 15: rising from 16.9 to 22.4.

Looking past the quick (and fleeting) media hit, this is a good result for Boots, which has made no secret of its desire to bring more beauty brands to the high street. Kylie Cosmetics is described the “most followed beauty brand in the world”, and offering its products in select stores and online could well increase the health and beauty retailer’s overall appeal to young, style-conscious, social media savvy Gen Z consumers. The positive reception may also speak to the growing appetite for “cruelty-free” beauty products: Kylie Cosmetics’ recent brand relaunch has placed special emphasis on “clean”, vegan formulas.