At the start of October Cineworld, the world’s second biggest cinema operator, confirmed it will temporarily close all of its UK and US cinemas having struggled to draw in visitors without a stream of new films.

Since Cineworld announced closures, Vue confirmed at the weekend that their screens will shut three days a week while Odeon is shutting 30 cinemas for four days a week.

Cineworld’s closure was triggered by the further postponement of the twice-delayed new James Bond film, No Time to Die, which has now been delayed until 2021 along with a host of other high-profile films.

Read more: Cineworld looks to the future with uncertainty

Cinemas have struggled to entice customers to return as lockdown measures have eased, leading to some films bypassing cinemas straight to streaming services such as Disney’s Mulan.

New YouGov data shows that Buzz scores (a net measure of whether consumers have heard anything positive or negative about the brand in the last fortnight) for Cineworld have plummeted from 0.2 to -26.2 at its lowest point. 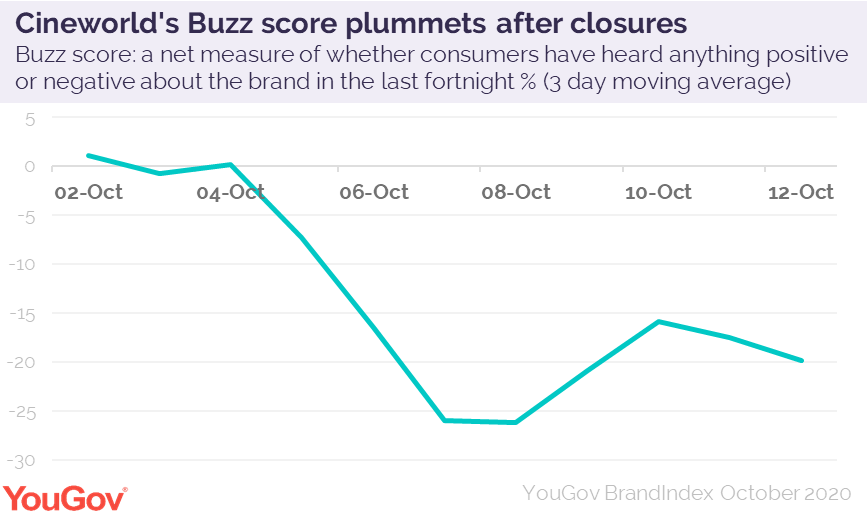 Consideration scores (whether someone would consider purchasing from the brand in future) for all three cinema chains initially grew after 4th July, the date when cinemas were allowed to reopen (although most cinemas chose to reopen after this date).

Cineworld scored the highest consideration on 13th August at 26.6, however scores dipped in August before a growth spurt in September – possibly due to the release of Christopher Nolan’s Tenet.

Separate YouGov polls help explain why Consideration scores for Cineworld and other cinemas declined following a lack of new films. More than a third of adults who say they watch films very or fairly frequently say that they prefer to wait and see a film they’re interested in watching in the cinema (36%), rising to 47% of film fans aged 18 to 24.

While four in ten adults (40%) who prefer watching new films in the cinema do so because they can see the film as soon as it’s released, even more enjoy the social occasion (55%) and the viewing experience (67%).

Although cinemas have been able to reopen and offer a socially distanced viewing experience, without a steady stream of new films it’s hard to entice film fans. This is demonstrated by the steady decline in Current Customer scores for both Cineworld and other cinema brands since July – Cineworld’s scores decreased 5.4 points between July and October.