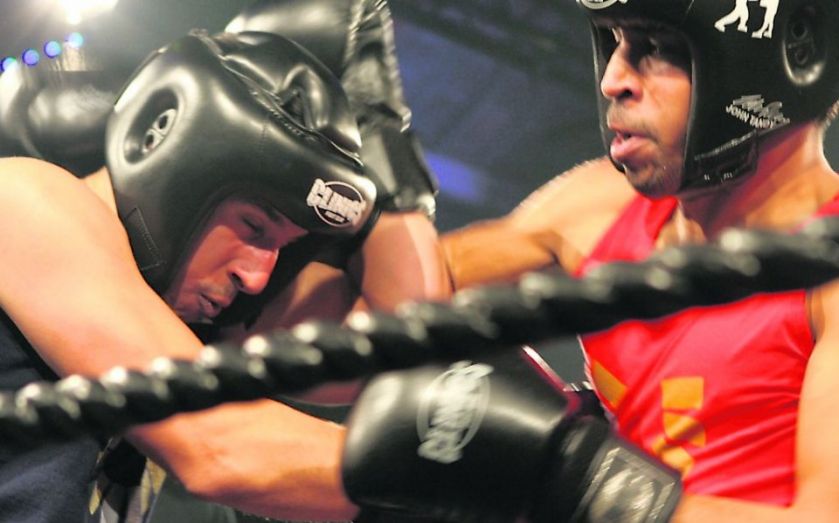 Lawyers are known for their ferocity inside the courtroom, but rarely do we get to see them bare their teeth outside. Well, thanks to Baker & McKenzie senior associate Matt Totman, now we do. Saturday night saw the Boxing for Buhinga event take place at The Brewery and with it, 16 City lawyers pulling on the gloves and taking a swing at each other.
There were fighters from HSBC, Credit Suisse, Taylor Wessing, EDF and Baker & McKenzie to name but a few.
The bloody noses were all in aid of Buhinga Primary School, an overcrowded and dilapidated school in Fort Portal, Uganda, which Totman and co. want to redevelop.
They held a similar event in 2012 at The Grange, St Pauls and raised over £31,000, which led to the redevelopment of a classroom block and the building of a new water-based toilet block for the 800 girls who attend the school.
And how did they fare? Well, founder Matt “The Terror” Totman managed to beat Paul “Pablo The Punisher” McCormack, senior legal counsel at HSBC. Totman’s Boxing for Buhinga co-founder Imran “The Psycho” Syed of DLA Piper beat Credit Suisse’s Patrick “The Indian Cobra” D’Souza.
Looks like the law fought the law and the law won.