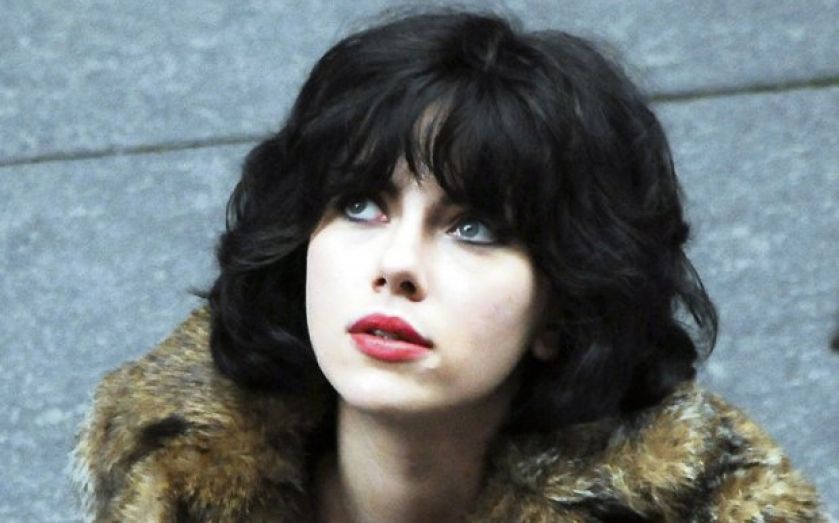 FILM
UNDER THE SKIN
Cert 15 | By Alex Dymoke
Five Stars

IF YOU were considering the filmic potential of Scotland, first to come to mind would probably be the highlands; the dramatic barrenness of  the western isles, the bronze light that illuminates the Grampians every evening. You probably wouldn’t think of Asda, Tescos, or obscure ring-roads on the outskirts of Glasgow. Yet this is the unlikely world in which Scarlett Johansson finds herself in Under The Skin, the new freezer-cold masterpiece from Sexy Beast director Jonathan Glazer.

Many of the street scenes are filmed with real people using hidden cameras dotted around the car. The authenticity is startling, especially juxtaposed with Johanasson’s radiant iciness. With no conscience or ability to relate, the alien views the world with chilling objectivity. In one particularly hard-to-watch scene she witnesses a terrible catastrophe – a swimming couple are washed out to sea, leaving their baby crying alone on a windy beach – and just stares, expressionless, unmoved. Eventually she turns away, leaving the wailing baby abandoned as the waves draw in. In some lights, though, the inhumanity looks surprisingly humane. Late one night she invites a shockingly disfigured man (played by real-life neurofibromatosis sufferer Adam Pearson) into the van. Blind to his disfigurement, their exchange is a catalyst for an epiphany of empathy, after which she is suddenly vulnerable.

Atmospherically, the film has much in common with Leos Carax’s Holy Motors – sinister humour teetering on the edge of absurdity, about to fall into abject horror. It shares with that film a straight-faced commitment to a world that at times appears utterly bonkers. The use of an A-List hollywood star heightens the absurdism and adds a layer of insane humour – watching an alien wander around Glasgow asking for directions is weird, watching Scarlett Johansson do it is hilarious. Her celebrity provides extra luminosity to the character’s alien otherworldliness. She has few lines, and barely wavers from a vacant stare into nothing, but it is a transfixing, landmark performance. Under The Skin is strikingly strange, but there’s a thoughtful logic at its core. It’s partly a thought experiment – how would the earth look to a thing that’s just landed on it from space? The answer: beautiful, terrifying and completely unforgettable.

THIS weekend sees the launch of The Great Architecture Fair, the Royal Academy’s first ever online architecture fair, giving visitors the opportunity to buy objects that featured in the hit exhibition Sensing Spaces: Architecture Reimagined. The exhibition, which has run in the Royal Academy’s Main Galleries since January, featured the work of up and coming architects from around the globe including Li Xiaodong, Pezo von Ellrichshausen and Eduardo Souto de Moura.

Sensing Spaces is the Royal Academy’s most ambitious project for years. It does away with paragraphs and paragraphs of justificatory text, and replaces it with bold installations designed to engage and stimulate the various ways in which we interact with buildings. It explores how vision, touch, sound and memory factor into our experience of light, materials and space.

If you’ve got plenty of the latter, you can buy complete installation pieces for thousands of pounds. Those on considerably smaller budgets should log on as well – prices start at five pounds. In between, you can get your hands on Diébédo Francis Kéré’s stool for £275 or his Chaise Longue for £2,500. You can also bid for “unique experiences” including an evening meal with the participating architects of the exhibition. All the proceeds from the fair go towards the Royal Academy’s exhibition programme.

THERE’S a good chance that the writer of this new musical was banking on the fact that anyone who pays to see a production called Urinetown has a good sense of humour and an appreciation of bad taste.

Set in a dystopian New York City, the play paints a bleak picture of a world that has run out of resources. A chronic water shortage has hit the metropolis and the US government has regulated the use of toilets. Free and easy flushing is a distant memory, and a cheeky whizz in the park will get you arrested by the NYPD and exiled to a mysterious land called Urinetown.  No one really knows what Urinetown is but one thing is certain – no one ever returns. Instead, impoverished New Yorkers save up their pennies to use one of the “public amenities”, all of which are owned by a greedy corporation called Urine Good Company. Cue a plucky uprising demanding the return of loos to the people and a genuinely nuanced debate about the sustainability of freedom under the pressure of rapid population growth. One of the characters is even reading Thomas Malthus.

Every character reeks of irony and self-awareness (with plenty of pops at the title) but the slapstick comedy keeps the play from straying into pretentiousness. The songs aren’t bad either. Few of them stand out as memorable but none feel overly contrived. The music moves the narrative along in a spiky, Brechtian manner that won’t do much for Webberphiles but will delight the rest of right-thinking society.

While Urinetown is far too vulgar to be called a musical of substance, it’s still a refreshing, comedic take on the tensions between liberty and social responsibility. And you should also see it because it’s called Urinetown, obviously.