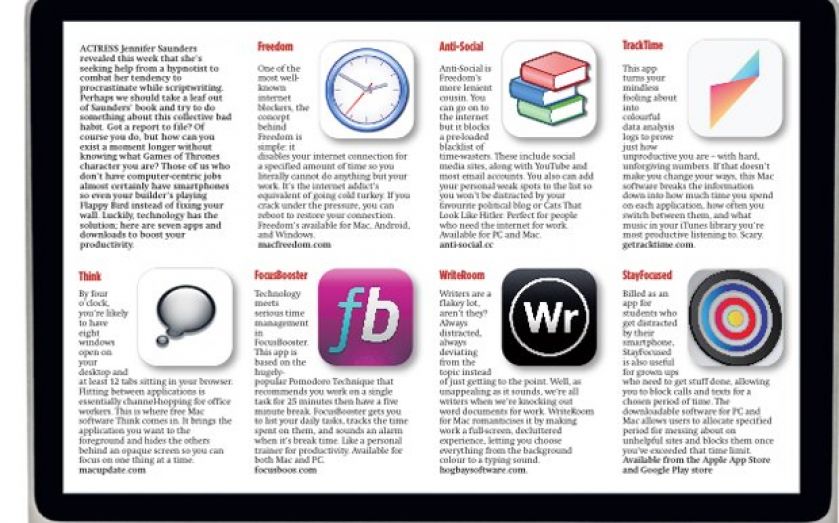 ACTRESS Jennifer Saunders revealed this week that she’s seeking help from a hypnotist to combat her tendency to procrastinate while scriptwriting. Perhaps we should take a leaf out of Saunders’ book and try to do something about this collective bad habit. Got a report to file? Of course you do, but how can you exist a moment longer without knowing what Games of Thrones character you are? Those of us who don’t have computer-centric jobs almost certainly have smartphones so even your builder’s playing Flappy Bird instead of fixing your wall. Luckily, technology has the solution; here are seven apps and downloads to boost your productivity.

Think
By four o’clock, you’re likely to have eight windows open on your desktop and at least 12 tabs sitting in your browser. Flitting between applications is essentially channel-hopping for office workers. This is where free Mac software Think comes in. It brings the application you want to the foreground and hides the others behind an opaque screen so you can focus on one thing at a time.
macupdate.com

Freedom
One of the most well-known internet blockers, the concept behind Freedom is simple: it disables your internet connection for a specified amount of time so you literally cannot do anything but your work. It’s the internet addict’s equivalent of going cold turkey. If you crack under the pressure, you can reboot to restore your connection. Freedom’s available for Mac, Android, and Windows.
macfreedom.com

FocusBooster
Technology meets serious time management in FocusBooster. This app is based on the hugely-popular Pomodoro Technique that recommends you work on a single task for 25 minutes then have a five minute break. FocusBooster gets you to list your daily tasks, tracks the time spent on them, and sounds an alarm when it’s break time. Like a personal trainer for productivity. Available for both Mac and PC.
focusboos.com

Anti-Social
Anti-Social is Freedom’s more lenient cousin. You can go on to the internet but it blocks a pre-loaded blacklist of time-wasters. These include social media sites, along with YouTube and most email accounts. You also can add your personal weak spots to the list so you won’t be distracted by your favourite political blog or Cats That Look Like Hitler. Perfect for people who need the internet for work. Available for PC and Mac.
anti-social.cc

WriteRoom
Writers are a flakey lot, aren’t they? Always distracted, always deviating from the topic instead of just getting to the point. Well, as unappealing as it sounds, we’re all writers when we’re knocking out word documents for work. WriteRoom for Mac romanticises it by making work a full-screen, decluttered experience, letting you choose everything from the background colour to a typing sound.
hogbaysoftware.com.

TrackTime
This app turns your mindless fooling about into colourful data analysis logs to prove just how unproductive you are – with hard, unforgiving numbers. If that doesn’t make you change your ways, this Mac software breaks the information down into how much time you spend on each application, how often you switch between them, and what music in your iTunes library you’re most productive listening to. Scary.
getracktime.com.

StayFocused
Billed as an app for students who get distracted by their smartphone, StayFocused is also useful for grown ups who need to get stuff done, allowing you to block calls and texts for a chosen period of time. The downloadable software for PC and Mac allows users to allocate specified period for messing about on unhelpful sites and blocks them once you’ve exceeded that time limit.

Available from the Apple App Store and Google Play store